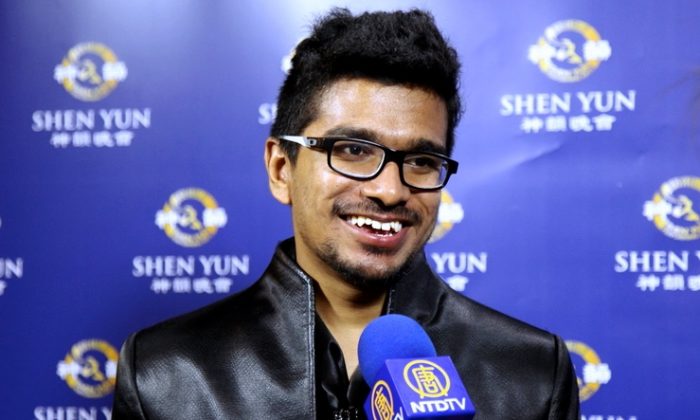 KEELUNG, Taiwan—Whenever Shen Yun makes a stopover in Taiwan for its Asian leg of the world tour, it attracts not only local Taiwanese citizens, but also people from nearby countries and regions, including China, Hong Kong, Singapore, Vietnam and India. At the northern tip of Taiwan, New York-based Shen Yun Performing Arts graced the stage of Keelung Cultural Center on March 31.

Every year, Shen Yun tours around the world, performing in some 100 cities throughout North America and South America, Europe, Asia, and Australia, according to its website.

Mr. Scaria continued to explain, “Discipline, spirituality in the performance, you could feel that there’s discipline in every movement of this, and more than often that spiritual touch could be felt in the audience, like I could feel the dancers and musicians.”

Throughout history almost every culture looked toward the divine for inspiration, according to Shen Yun’s website. Art was meant to uplift, bringing joy to both the people who created and experienced it. It is this principle that drives Shen Yun performers and their art.

“I would say that the divinity is the most important part that comes out of this performance, and it’s not just the participants or performers who do that, I could see that it was translating to the audience, transmuting the audience,” said Mr. Scaria.

Mr. Scaria explained that he believed the performances in India are more commercial oriented, and Shen Yun is different and it can do a beautiful job to introduce Chinese traditional values to people in India.

‘Speak to the Heart’

“I personally love the second soprano, I think she was fantastic, her voice was divine, really, and very strong, very powerful, very gentle,” said Simona Halperin, the representative of the Israel Economic and Cultural Office in Taipei.

Shen Yun vocalists, using the bel canto technique, perform all-original compositions in Chinese while the translations of the lyrics are shown on the digital backdrop.

“I think the songs penetrate into all of us,” said Ms. Halperin.

The beauty of the performance also stood out in her mind, said Ms. Halperin, while applauding the presentation of the ancient Chinese culture.

Through the universal language of music and dance, Shen Yun weaves a wondrous tapestry of heavenly realms, ancient legends, and modern heroic tales, taking you on a journey through 5,000 years of Chinese culture, according to Shen Yun’s website.

“It gave us very broad look through the history of Chinese culture, and very chapters, thousands of years, and various ethnicities,” said Ms. Halperin.

“I think it was very fantastic.”