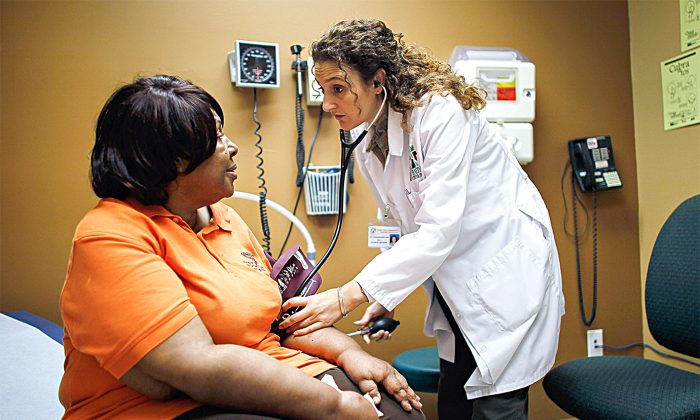 A woman is examined by a doctor during a routine checkup at the Jessie Trice Center for Community Health clinic in Miami in 2012. (Joe Raedle/Getty Images)
Good to Know

Americans may have to wait even longer for their doctor’s appointments, as the demand for primary care continues to exceed the supply.

Medical experts say over-regulation and increasing overhead costs are driving doctors out of practice. They also say that the limited number of medical schools and training slots is preventing new physicians from entering the profession.

Because of the amount of time it takes to train a new doctor—five to 10 years—and with the average medical student accumulating a debt of over $180,000, experts say other, more efficient solutions are needed to combat the growing shortage.

Dr. Ateev Mehrotra, associate professor of health care policy and medicine at Harvard Medical School, said the time it takes to train students means that even an increase in funding for medical training slots won’t immediately solve the problem.

“Even if I could wave a magic wand and say, ‘Right now, I’m going to increase the number of medical school slots,’ it’s going to take a decade to solve these problems. So we also have to be looking for other solutions right now,” Mehrotra said.

Dr. Jane Orient, executive director of the Association of American Physicians and Surgeons (AAPS), said doctors are being driven out of private practice prematurely because of the high overheads required for running their practices.

“Some of them are becoming employees of hospitals, in which case generally their productivity drops, or they are just retiring earlier than they ever thought they would,” she said. Ultimately, this means fewer patients are taken care of.

What Are the Advantages of Being Married to a Physician?

Orient said the current certification requirements for doctors, which create more administrative compliance work and require them to take an exam every few years, are an unnecessary burden. “Requirements like maintenance of certification is extremely time-consuming and expensive,” Orient said. “There’s been no evidence at all that this assures doctors are any better.”

Dr. Janis Orlowski, chief health care officer at the Association of American Medical Colleges (AAMC), said the government’s temporary cap on federally funded residency training slots, which was put in place in 1997, is contributing to the slow growth of the profession.

Orlowski advocates for lifting the cap and providing federal support to train at least 3,000 more doctors per year for residency slots, half for shortage specialties. The AAMC wants 15,000 trained over the next five years to combat the shortage.

What happens is that patients find it increasingly difficult to get an appointment with a physician and when they do get their appointment that it is extremely rushed.
— Dr. Jane Orient, executive director, Association of American Physicians and Surgeons

Dr. Nitin Damle, president of the American College of Physicians (ACP) and a practicing internist, said, “Physicians in training, between first year and third year, are not going into general primary care,” which is the most needed area of specialists. “They do hospitalist work, inpatient care, or some speciality care.”

He said it’s partially driven by the cost of education, which leaves many students with up to $200,000 in debt.

“Primary care [physicians] are as low paid as internists in the house of medicine,” he said. “Internal medicine is one of the lowest paid [professionals] in medicine, so they are not going to gravitate to that.”

The shortage of physicians in the United States is predicted to increase.

By the year 2025, there will be an estimated shortage of 88,000 doctors, according to AAMC. This number is projected to increase to up to 104,900 by 2030. While some of these numbers are disputed by some in the medical profession, there’s a general agreement that more doctors are leaving the profession than coming in.

According to the AAMC, population growth will be the “primary driver of increasing demand from 2015 to 2030.”

A new report by research firm Merritt Hawkins says the average wait time for physician appointments in the 15 largest metropolitan areas is 24 days. The number of days is even higher in smaller metropolitan areas.

These wait times are projected to increase in the future, Orlowski said. “We believe that there is going to be a significant impact on patients.”

The report found that wait times in the United States have increased by 30 percent from 2014. But Mehrotra says that wait times do not necessarily correlate with a shortage of doctors.

Telemedicine can reduce the need for patients to visit the doctor.

“I practice in Boston, which currently has the most physicians per capita of any place in the United States, yet we have very long wait times,” Mehrotra said.

According to the Merritt Hawkins report, Boston had the highest wait time in the United States for new patients, with an average of 52 days.

“I think what happens is that patients find it increasingly difficult to get an appointment with a physician and when they do get their appointment, that it is extremely rushed,” Orient said.

Some in the industry say that technology could help alleviate the pressure on doctors.

Telemedicine can reduce the need for patients to visit the doctor, which can save a lot of time on both ends, said Mehrotra.

“By using technology, the physician’s patient can maybe have the visit at their home and not have to go in and to make it not only more efficient, but also allow the physicians to manage the problem much more quickly,” Mehrotra said.

The telehealth app Doctors on Demand, which connects patients with doctors via video calls, is currently being used by leading telemedicine companies around the world.

Dr. Stan Kozakowski, director of the Division of Medical Education of the American Academy of Family Physicians, said that evolving technology could possibly help reduce the need for more doctors.

“With dermatology, the computer is very good at distinguishing some of the various types of skin lesions and rashes. It again questions whether in the future we would need the same number of dermatologists if this technology continues to evolve,” Kozakowski said.

One solution to the shortage may be to increase efficiency by shifting patients from the physician to the nurse or physician’s assistants instead. Mehrotra said patients are likely to see this happening more in the near future.

“Why not have a nurse practitioner or physician assistant within the practice manage much of the care and therefore allow the cardiologist to manage together with the nurse practitioner a lot more, and we are seeing that across the board,” Mehrotra said.

Telemedicine Offers a Convenient but Narrow Window of Care

Kozakowski said one solution is distributing the number of physicians to those in the population that are most needed.

However, Mehrotra says that, if you take into account the evolving industry, the shortage is not as bad as the numbers suggest.

“My belief is that the shortage is overstated or non-existent. As physicians evolve their practices … patients [will] interact with someone who is not a doctor and that encounter will not happen in an office, but rather using technology through video conference or exchanges of information.”