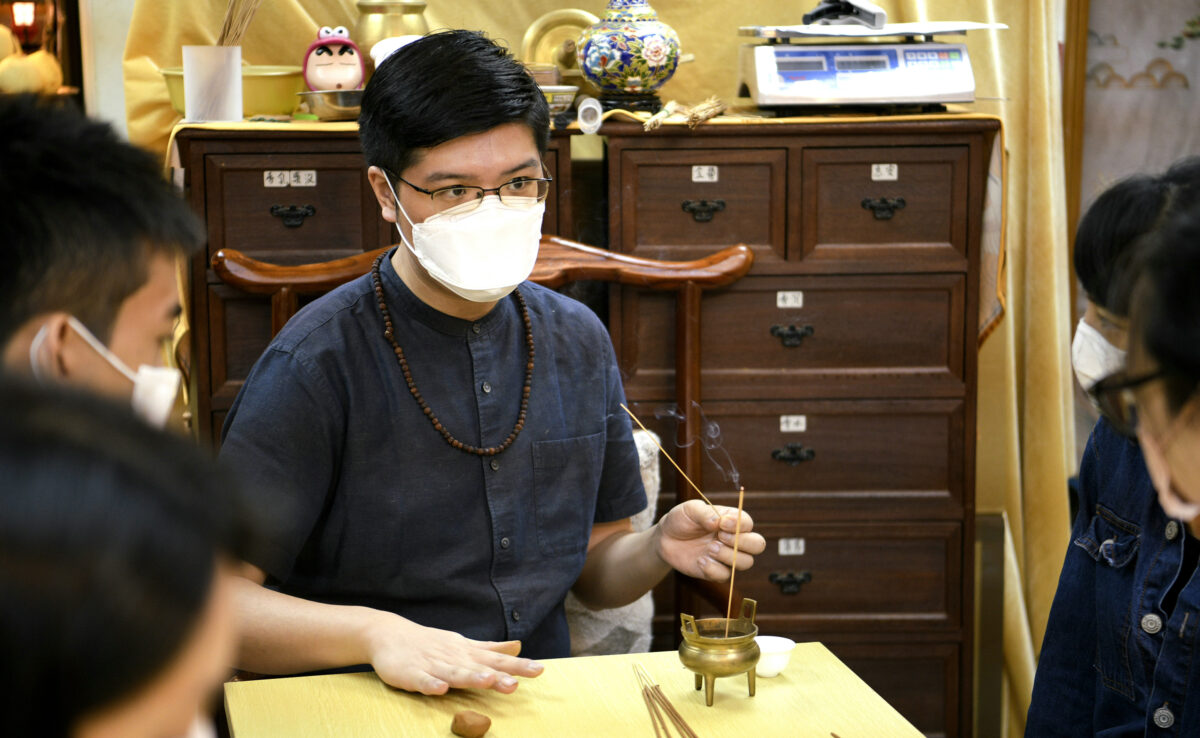 Aaron talks about incense making and his incense products in August 2021. Aaron has been “searching for incense” since he was 15 and started making his own 10 years ago. He has an incense company and is committed to promoting incense culture. (Hui Tat/The Epoch Times).
Hongkongers' Story

Aaron Tang, a Gen-Y incense artisan, had a spirit for preserving an uncommon tradition in Hong Kong culture.

Ten years ago, with strong determination, Aaron successfully made his very first incense after six months of trial and error.

Aaron hoped that more Hongkongers could experience incense-making, and through the incense they create, they can tell the world that Hong Kong is a place full of unique cultural values.

Aaron founded Hong Kong Incense Company, where he also holds incense-making classes to conserve the local traditional incense culture. Through teaching, Aaron wished to encourage more Hongkongers to experience incense-making themselves. And through their self-made incense, they could tell the world that Hong Kong is a place full of many traditional cultural values.

“As long as we continue with perseverance, we will see the future,” Aaron emphasized.

Start of the Journey

Aaron grew up in an ordinary Hong Kong family. He had always been fond of different Chinese musical instruments and cultures. “I enjoy watching the Cantonese-Chinese opera very much,” He said with a smile, knowing that his love for Chinese opera is rare in the younger generation.

One day, as he walked past a monastery after school, a woody scent in the wind caught Aaron’s interest, urging him to go around town looking for incense.

After a while, the incense shop Aaron had frequented was closing business. That stirred anxiety for him as he feared he would no longer be able to buy his favorite incense.

“I realized at that point that if I have so much love for incense, perhaps I could try making it myself.” That was the beginning of his love crossing paths with culture conservation.

With hard work, consistent trial and error, and with his persistence to succeed, Aaron finally handmade his first incense.

The Origin of Incense

The history of incense was dated as early as 6,000 years ago in different countries and religions, particularly Babylonians, Hindus, and Buddhists. It was believed the souls of the dead would ascend to heaven in the flame as the incense burned.

In some cultures, incense was used to drive away odor and demons and gratify gods’ presence. While in others, burning incense was for prayer ceremonies and worshiping ancestors, which you would usually see in Man Mo Temple in Sheung Wan or Wong Tai Sin Temple.

Walking into the Hong Kong Incense Company, paintings and calligraphy of Dr. Sun Yat-sen, Father of the Nation of the Republic of China, were hanging on the wall. Aaron described them as also “a part of his cultural conservation.” Aaron wanted to remind himself that the purpose of cultural conservation is for all Chinese, not for just one person or himself.

Hence, he felt his diligence toward the aromatic tradition was non-negotiable.

To Aaron, teaching traditional incense-making was his way of inspiring others to celebrate such a fragrant culture. “People can be inspired here and try to mix and match different ingredients before making their own. Through the art of making, we can pass on the tradition.”

According to Aaron, making incense for some people was a way to remember their loved ones.

Burnt incense was a sign of respect to the dead. To Aaron’s customers, it was also an expression of love.

The most satisfying for his incense-making journey is the zen the smell gives to people.

“After you smell the incense, you feel more relaxed and sleep better. It’s soothing and de-stressing after a long day.” People feeling good also became part of their motivation. He thought that Hong Kong could be suffocating at times with the ongoing pandemic and the overwhelming social environment.

Aaron described how life-changing making incense had been for him. “It will be my greatest merit if you feel soothed, happy, and relaxed after using the incense I make.”

Aaron said that what he had been doing was to share what nature had given everyone on earth.

Mr. Tam, a student of Aaron, visited the shop to learn how to make incense. Tam said he used to suffer from depression, so he wanted to learn how to help others and his needy friends. “I heard that benzoin has healing benefits for depression. So I want to make some benzoin incense for my friends to see if they can sleep better by using it.”

In Buddhism, incense would also be a tool for opening a path to your inner self and used for calmness, mindfulness, and meditation.

Inspired by the Buddhists, Aaron agreed that incense making could also evoke a kind heart and the benefits would be passed on; the scent of incense would wake up the desire to help others.

Local Culture Must be Inherited

The name of Hong Kong Incense Company in Chinese means “court of harboring scent.” It has the two Chinese characters of Hong Kong, which symbolize “made by Hongkongers.”

Another student of Aaron’s, Miss Chan, said she was a Buddhist who practices the worship ceremonies at home. She shared that a lot of commercial incense was full of chemicals. That was how she came to know about Aaron’s shop.

“When I go home, I will practice more so that I can make something more natural for my Buddhist rituals at home,” Chan said.

Aaron had gone through hurdles to be here today. He mentioned that he thought about giving up during the six-month trials because he kept facing setbacks.

But he talked himself into taking another small step each time.

“Just a little more. Why not try a bit harder and a little more to see what happens? Otherwise, you may never know.”

When facing the unknown, Aaron said that he would rather not overthink it and always try to do the best for himself and others.

He believes that, “Our success is not based on circumstances, but in the belief and persistence of ourselves. Only then do we see hope.”