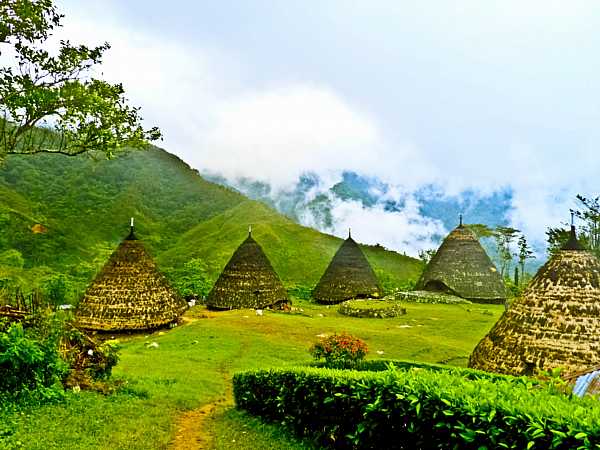 In the Jungles of Manggarai, Indonesia: Back to Basics, Back to Wae Rebo

The village of Wae Rebo is located deep inside the jungles of the Manggarai regency in Flores, Indonesia. At Ruteng, the nearest big town, we had gained respect instantly whenever we mentioned our intent to visit Wae Rebo. For the Mangarrai people, visiting Wae Rebo was a form of pilgrimage. We drove on motorbikes along a scenic road for six hours to reach Denge. From there, we trekked uphill through the jungle for four hours to reach a place called ‘mobile point’, named so because that was the last place where one could get a phone signal. Wae Rebo was right in front of us.

Wae Rebo comprises of seven conical houses neatly placed in a circle in a small lawn. The village was crafted out at the top end of a giant landscape that began with jagged peaks at one end that gently rolled over its green carpet to the sea at the other end. Our necks turned a full half circle to view this entirety. Candyfloss clouds floated slowly over this lost world. Even after a tiring climb, the view placed a spring in our feet and we hopped and ran towards the village.

As soon as the villagers saw us, they sat on an elevated circular platform, the village altar, at the centre of the village. Once we joined them, a chicken was sacrificed and its entrails studied to foretell our future. The forecast was all good. We were soon led to the main house, Rumah Gendang, where the village elders sat in a line along the diameter of the circular floor. We sat along its edges facing them. Again a chicken was sacrificed and its entrails studied. The Kepala Kampung (village head) started addressing us in Manggarai. A young man called Yos sat next to us and translated his words to Bahasa Indonesia, “I wish you well and also wish good future for the people in Wae Rebo, Ruteng and Singapore.” Then we all shook hands to formally greet each other.

After the ritual greeting, Yos showed us around the village, “The Manggarai people believe that the circle is a symbol of unity. That’s why the village is arranged in a circle, the floors of our houses are circular, and so is our village altar called kompang.” We strolled along leisurely. Everyone we came across gave us big smiles.
As it began getting darker, the temperature began to fall considerably. Wae Rebo was eleven hundred metres above sea level. The children of the village huddled together, crouching and pulling over their t-shirts to cover their arms and legs. They looked like small potato sacks but once I went near them they took out their arms from inside their t-shirts to feel my beard and laugh hysterically.

We asked Yos about life in Wae Rebo. “We grow coffee in these hills”, he said, “We carry down the coffee to the markets and on our way up, we bring back rice, soap and other supplies from the market. We follow a simple rule; twenty five kilos when going down, fifteen kilos when going up.” Another young man, Matien, joined us, “We don’t have any school or hospital here. When someone is sick, we have to carry her on our back to the nearest town. The children who go to school stay in a different village during weekdays. They come back only on weekends.”

We asked them about their houses, “All the materials for the house are from the surrounding jungles. Wae Rebo is the only remaining example of authentic Manggarai houses,” said Yos with a hint of pride, “All other villages in the region have become modern or half-imitations of traditional houses. There is a meaning behind each element. For example, all houses must face the kompang. Our ancestors who found this village wanted only seven houses. That’s why any new house is built separately from this compound.”

We entered the house meant for guests. The weak fluorescent lamp could barely light the room. “We don’t have electricity yet, so we bought our generator which we run for three hours every night,” said Yos. The roof of the house was about ten metres high. A wide bamboo with holes cut in it acted as a dubious ladder. The Kepala Kampung joined us. He was wearing a hoodie which had Princeton University written on it. He spoke in Mangarrai which Yos translated, “The roof is made of a kind of dry grass called alang-alang. It can catch fire easily. One charity from Jakarta helped us reconstruct some of the burnt houses.”

Copyright © 2014 by Vagabond Journey Travel. This article was written by Shivaji Das and originally published at www.vagabondjourney.com