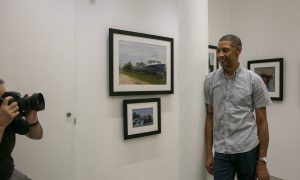 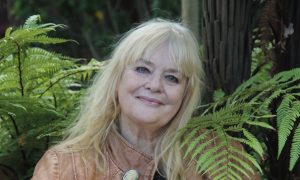 The Colorful Life of an Illustrator: From America to New Zealand
0 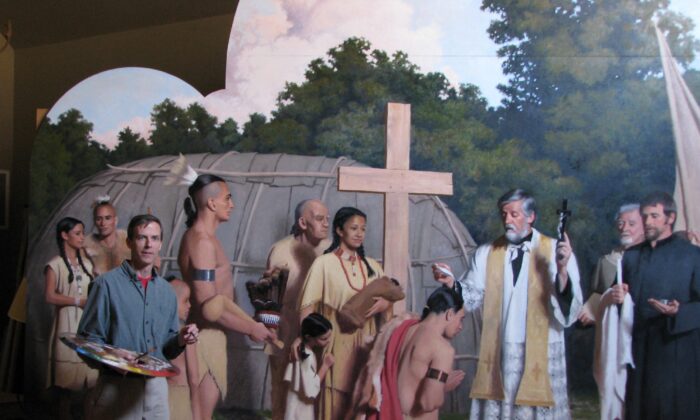 Henry Wingate and his “Father Andrew White Baptizing the Chief of the Piscataway,” which is now at St. Mary’s Catholic Church of Piscataway. (Courtesy of Henry Wingate)
Fine Arts & Craftsmanship

In the Footsteps of the Masters: The Art of Henry Wingate

BANCO, Virginia—The magic begins as you approach Banco, Virginia, the blink-of-an-eye town five miles north of Madison. The narrow two-lane rolls through dark forests and lush-green fields, the air is damp and soft, and the skies overcast—“Good light for painting,” you’ll learn later in the day. You pull into a small parking lot and study the building at the top of a short inclined yard. With its high-pitched roofs, timbered sides, and enormous window, the structure resembles one of those Baptist churches that dot the countryside in this part of the state.

Once inside, you fall even more deeply under the spell of this place. Here are shelves crammed with hundreds of books (mostly about art), paintings on every wall or stacked against a wall, drawings piled on desks and tables or strewn across a carpet, easels, Mason jars filled with paint brushes, drawing pencils, and somewhat incongruously, bird feathers. In one corner stands an open press filled with clothing and costumes, and on a shelf beneath the enormous window, which today is partly shrouded in black drapes, are seashells, bits of wood, bottles, and more drawings.

Classical music plays quietly in the background. You slowly make your way around the room, studying the paintings, admiring the eyes of a girl in a work in progress, soaking in the beauty of a woman’s portrait beside the front door, and pausing to absorb the religious meaning of three huge panels intended for a church in Australia.

Welcome to the enchanting world of artist Henry Wingate.

Born in Washington, D.C., in 1965 to Susan and Henry Wingate—his father worked at the Library of Congress—Wingate, for his first two years was wheeled in a stroller by his parents nearly every Sunday afternoon through the National Gallery of Art. Both his mother and father loved painting and sculpture, and Wingate believes this exposure at so tender an age may have profoundly influenced his lifelong love of art.

After a stint in North Carolina, the Wingate family—Henry is the second oldest of nine children—settled for a time in Charlottesville, Virginia. At Albemarle High School, Wingate’s favorite class was art, taught by a Mr. Johnson, “who let us pursue our own way.” In his senior year, Wingate searched for universities where he might study art, but found their programs stressed abstraction. “I thought art was a dead end because of modernism,” he says today.

So he selected a radical alternative: the U.S. Naval Academy.

He endured the rugged application process, was accepted, played 158-pound football, and after graduation went to Pensacola, Florida, for flight school. Once he had finished training, Wingate served on an aircraft carrier flying F-14s.

He enjoyed his time in the Navy, especially the flying and the travel. His most harrowing moment came while serving in the Mediterranean aboard the USS John F. Kennedy, when during a stormy night he had to make six landing attempts before finally touching down safely on the carrier’s deck.

After completing his obligation to the Navy in 1994, Wingate’s passion remained drawing and painting. Still discouraged by the arts programs he investigated, he was considering different professions—medicine, architecture, and teaching—when his father showed him an article he had read on ateliers, studios where working artists take younger artists under their wings and teach them the craft of painting. With his enthusiasm renewed, Wingate visited several ateliers across the country.

A Heritage of Learning to See

From the moment he entered Paul Ingbretson’s studio in Framingham, Massachusetts, Wingate knew he had found a home. The studio and the quiet intensity with which the students worked were the main draw. Ingbretson sealed the deal by telling Wingate that he wanted to inspire in his students a respect for “the good, the true, and the beautiful.”

For the next four years, Wingate studied with Ingbretson, moving from drawing casts with charcoal and pencil to the human form to still life. When he left the atelier, Wingate returned to Virginia and founded his own studio, but he realized after struggling for a short time that he still had much to learn. He trained for several months with Charles Cecil, an American who operated an atelier in Florence, Italy, and reentered Ingbretson’s atelier for a fifth year of work.

Though in their mid-70s, these teachers continue today to operate their ateliers, Ingbretson in Lawrence, Massachusetts, and Cecil in Florence.

Interestingly, both Cecil and Ingbretson had received similar instruction from R.H. Ives Gammell, an artist of the “Boston School” who trained with such painters as Edmund Tarbell and William Paxton. When modernist movements like fauvism, cubism, and futurism arose early in the 20th century, Gammell rejected these trends as ruinous to realism and counterattacked by writing books about art and technique, and by teaching young artists the classical methods of painting and drawing.

Henry Wingate, then, is an heir to the talents and techniques of generations of artists, and remains as determined as these mentors to pursue the good, the true, and the beautiful in his work.

In addition to these living masters of the brush, other painters inspire Wingate in his work, artists like van Dyck, and Raphael, Chardin for his masterpieces of still life, and Titian, particularly his work “The Assumption of the Virgin.”

But it is Velázquez who most deeply attracts him. Opening a book of the Spaniard’s paintings, Wingate gives me a short art lesson from the painter he claims was one of the first to try “to paint in the way our eyes and minds work, with some things ‘found’ and some things ‘lost’ when we look at an object or a person.” The “founds,” Wingate tells me, are those things to which the eye is drawn, either in life or in a painting; the “losts” are those things present but little remarked, hidden by shadows or darkness.

Taking as his examples Velázquez’s “Christ on the Cross” and “Pope Innocent X,” Wingate explains the artist’s extraordinary skill in using light and shadow to give his paintings what artists call breadth. “His paintings are true to life, and he recognized the way our minds and eyes see things. If we can get that sense of light and life into a painting, we create atmosphere, which makes you feel as if you can reach into the canvas.”

Wingate recounts a story from 1650, when Velázquez’s “Pope Innocent X” appeared in Rome along with works by other painters. “Look at all these nice pictures we Italians painted,” said one artist guiding some visitors through the exhibition. He then pointed to the painting of the pope. “But Velázquez painted life.”

And that is Wingate’s aim as well: to paint life.

Husbands and wives, judges, government officials, and university deans make up just some of the clients who have commissioned Wingate to paint their portraits.

For other paintings, Wingate uses models who pose on a raised stage facing the enormous window in his studio while he breathes life into their portraits with brush and canvas.

Churches from as far away as Australia have also sought him out. Four of his paintings, for example, depicting the life of St. John the Baptist hang in the Catholic church in Front Royal, Virginia. And St. Mary’s Catholic Church of Piscataway, Maryland, proudly displays “Father Andrew White Baptizing the Chief of the Piscataway.” This enormous painting, 16 feet long and 13 feet tall at its peak, contains 14 life-sized figures, including some descendants of the Piscataway.

In 2001, Wingate married Mary Rohan. Today the couple has seven children: Agnes, 18; Henry, 15; Cecilia, 13; Evelyn, 11; Esther, 7; Julia, 3; and Anna, 4 months. They have sent some of the children to Montessori school, homeschooled them, and enrolled the older ones in Front Royal’s Chelsea Academy, where Wingate also teaches a course in drawing to the high school students. To perpetuate the tradition set by his own teachers, Wingate also occasionally offers instruction to private students, young men and women who come to his atelier seeking to improve their skills.

Wingate anticipates more and more young artists turning to representational art. “I’m very optimistic about the future of it and think it’s only going to grow,” he said.  “And we need more competition so the best of the best can rise to the top.”

For the last half hour of my visit to Wingate’s studio, he works on a still life while I stroll around the place, taking in the details, listening to the soft music, and making notes on my laptop. Wingate works quietly at this canvas, oblivious to me, an angular handsome man totally absorbed by his work and his calling, trying to transform a bit of canvas into a living reality of color and form. Watching him work, I think of his teachers and those who taught them, and the legacy created by that long line of artists.

Henry Wingate brings those eyes to every canvas touched by his brush.