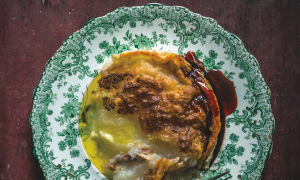 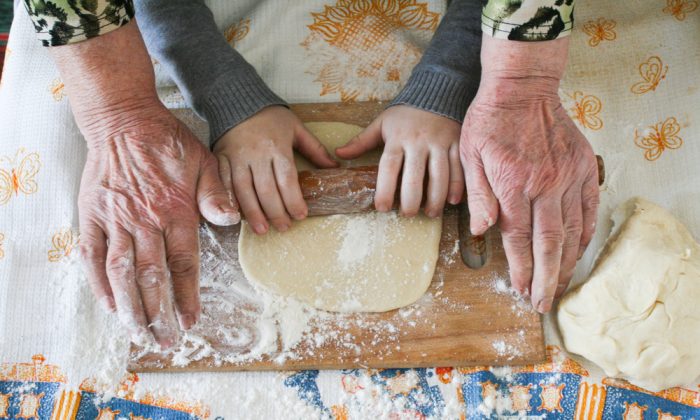 In Nonna’s Kitchen: Meatballs, Dumplings, and Goulash Do Travel

A new cookbook chronicles the stories of America's immigrant mothers and grandmothers, through their family recipes
By Ilana Sharlin Stone

It all started with meatballs. Impossibly light, delicate meatballs poached until sublime in brodo di mamma, the rich tomato sauce made by the Italian mamma of Anna Francese Gass, Connecticut-based chef, recipe tester, and author of the new cookbook “Heirloom Kitchen: Heritage Recipes and Family Stories From Immigrant Women.” It’s one of 100 recipes in this treasure of a collection of global comfort foods, repatriated by home cooks from countries as far afield as Ukraine, the Dominican Republic, and the Philippines, to the United States.

“Anyone who has Gina’s meatballs is obsessed,” said Gass, as if they needed vouching for. Gass was raised on these elegant yet nourishing polpette, which have an unusual infusion of brodo—sauce mixed into the meatball mixture for extra flavor and texture. The family recipe traveled with her mom from Calabria all the way to her new home in Westerly, Rhode Island, in 1981—not on a recipe card, but in Gina’s head, heart, and muscle memory.

It seems Gass was destined to be the chronicler of America’s immigrant dishes, which she affectionately refers to as “bowl and spoon recipes.” A quest to commit her own mother’s prized recipes to paper, before it was too late, ultimately led her to document those of 40 grandmothers, along with their personal stories of immigration challenges and triumphs.

Gass’s mother, Gina Crocco Francese, grew up on a farm in the southernmost part of Italy, eating simple home-grown food, dishes she immediately began cooking when she arrived in the United States.

“When my mom is making the dishes that her own mother made her when she was a child, she is at her happiest,” said Gass.

As an adult, Gass began to think about how her mom managed to remain connected to her family back in Italy. “I remember my mom calling Italy once a month because long distance calling was expensive and difficult. I realized, almost accidentally, that it was the food she cooked that kept the connection,” Gass said.

She began holding cooking sessions with her mom, during which Gina cooked and Gass recorded measurements and instructions. They went so well that Gass began offering her services to mothers and grandmothers of her multicultural group of friends. Initially, she did it solely for the fun, and the satisfaction of helping to preserve these family heirlooms.

“I never thought I’d get many people to do it; it seemed like an inconvenience,” she said. Yet, mothers and grandmothers jumped at the chance to have their recipes recorded in the comfortable surroundings of their own kitchens. “There was the excited realization that, ‘I’ve been doing this for years, and now someone wants to know how I do it!’” Gass said.

Gass posted recipes on her blog, along with the immigration stories of these exceptionally strong women that quite naturally spilled out as they cooked together. Eventually, she realized she had something special, and that this passion project had to become a book.

“With my first 20 or so women, I had a direct relationship. After that, we called it ‘Nonna Brokering,’” Gass said. She put the word out to friends who lived in different cities across the country, asking if they had friends or relatives with an immigrant background who might be interested in taking part.

As a recipe tester who’s worked for Food52 and Martha Stewart, Gass’s skills were still tested by the book, although in unexpected ways.

“When I test recipes for a magazine, I’m very methodical,” she said. “I want to make sure the recipe works. With my book, it wasn’t just about getting a goulash recipe that worked, it was about getting one that tasted exactly like Anke’s goulash.” The responsibility she felt to perfectly capture these dishes with their generations-old legacies was immense, as was the retelling of the women’s personal stories, frank tales of difficult circumstances and journeys to a new life.

For all these women, preserving their heritage was paramount, and it was largely undertaken through food. Gass states in her book, “While these women may have jumped into our melting pot, they held their own spoons.” They did it for their children, so these dishes would become an edible link to their heritage; and for themselves, so that they would feel at home.

One of the grandmothers is Tina Hsia Yao, a retired businesswoman originally from Shenyang, China. The daughter of a major general for the Chinese Nationalist Party, her family was constantly on the move for the first few years of her life seeking safety, before relocating to Taiwan. She married and, after graduating with a degree in Chinese Literature, she and her husband immigrated to the United States, settling in Queens, where she made a new life for herself and her family.

Yao’s recipe for Chinese New Year dumplings comes with a story about how they were communally made in Yao’s village in the northern region of China in preparation for the celebration, and how the women would sit for hours making them while eating and exchanging gossip.

Not all the women celebrated in the book grew up absorbing recipes while holding onto apron strings. Sheila Brathwaite Haire, whose recipe for arroz con pollo (Panamanian chicken and rice) appears in the book, had a comfortable childhood in the Panama Canal Zone.

The youngest in her family, she was pampered, which meant she spent little time in the kitchen. As the grandchild of a Panama Canal employee, she was able to easily immigrate to the United States at the age of 16. It was only when she arrived that she realized she had to learn to cook in order to feed herself.

“She worked with her family members to piece together her talented grandmother’s recipes and began to master them all, one by one,” Gass explains in her book.

It doesn’t take much to get Gass to tear up: remembering one woman’s story of a particularly difficult passage from Ukraine, or even seeing her own mother’s hands on the cover of her book, cutting uniform ribbons of tagliatelle.

That is why recipes are about so much more than instructions, whether it’s Shari’s tahdig (Iranian scorched rice), Morgana’s brigadeiros (Brazilian chocolate bon bons), or your own grandmother’s specialty.