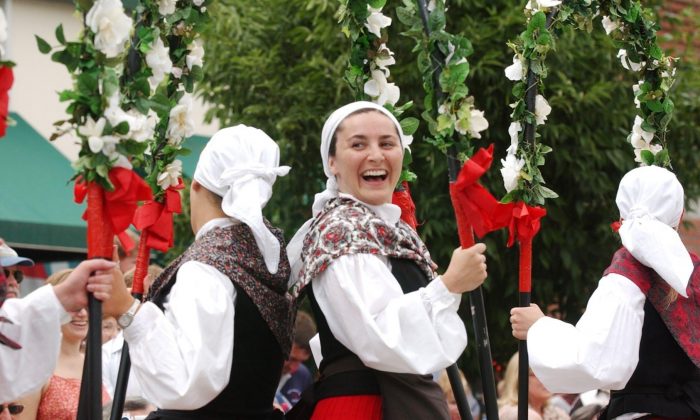 In Idaho, Basque Culture on a Block in Boise

BOISE, Idaho — Idaho is home to one of the biggest concentrations of Basques in the United States, and the best way to learn more about that heritage is by visiting the Basque Block, tucked in the center of the state’s capital city.

Basques began settling in southwestern Idaho as early as the late 1800s, with many coming from the Basque region on the border of Spain and France to work as sheepherders in Idaho. Nearly 8,000 residents of the Gem State identify as Basque today.

Boise preserved the Basque Block’s rich history with a massive conservation effort during the early 2000s. Green, red and white Basque flags now adorn the streetlights, and the street — which lacks raised sidewalks and curbs — is frequently closed to cars thanks to festivals celebrating Basque culture.

The single block offers a crash course in all things Basque. A sprawling mural along a brick wall depicts seafaring Basques of the 1500s as well as traditional dancers in red and white attire. The Basque community is largely Catholic, and the mural also depicts Boise’s St. John’s Cathedral.

For more in-depth history, The Basque Museum and Cultural Center is packed with exhibits that explore the lives of the first Basque sheepherders, including a sheep wagon and full-size sheepherder’s tent. Between April and September, the museum also offers guided tours of a restored Basque boardinghouse, which is also Boise’s oldest surviving brick building.

Next door, The Basque Center has evolved into a local gathering place. The center is home to two traditional dancing groups and hosts tournaments for traditional Basque card games.

At The Basque Market, visitors can find one of the Northwest’s largest selections of Spanish and Basque wines while shopping for specialty foods from the Iberian Peninsula, a rarity in landlocked Idaho. The market has become famous for preparing large portions of paella, served with homemade baked bread every Wednesday and Friday right on the patio for $8.99.The market also serves a revolving tapas menu every day from 11 a.m.

Other Basque eateries include Leku Ona, which in the Basque language means “good place,” 117 S. Sixth St., offering casual and formal dining, or Bardenay, a restaurant and distillery, at 610 W. Grove St. Bar Gernika, 202 S. Capitol Blvd., is an old-fashioned pub in a landmark 1948 building where you can get traditional favorites like the lamb grinder and croquetas, along with a wide selection of beer.

The traditional Basque language is classified as a threatened tongue, with fewer than 1 million people able to speak it worldwide. But it’s easy to learn one term while you’re here: “ongi etorri” (pronounced ohn-gee eh-toh-ree). That’s Basque for welcome.