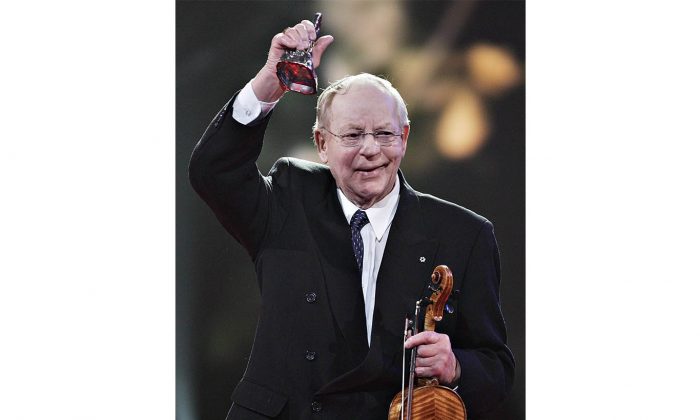 In Appreciation of a Master Fiddler

Celebrated internationally, he was perhaps nowhere more revered than in his home region of Cape Breton, where he was considered a generous mentor remembered for his distinct playing style.

“He’s been the most famous of the Cape Breton fiddlers,” said his niece and renowned fiddler Natalie MacMaster.

“When I travel around and announce off the stage that Buddy MacMaster is my uncle, everybody cheers.”

Born in Timmins, Ont., Hugh Allan MacMaster moved to Cape Breton, where he took up the fiddle when he was 11 years old. He became a sought-after musician, renowned for his flair for playing traditional folk dance music.

MacMaster was made a member of the Order of Canada in 2001 when he was formally recognized with helping lead a Gaelic renaissance, both in Canada and abroad.

His citation for the honour says he began playing the fiddle as a child after finding his father’s instrument in a trunk.

Earlier this year, MacMaster joined the ranks of music giants Bob Dylan, Pete Seeger and fellow Canadian Stan Rogers when he was awarded the prestigious International Folk Alliance Lifetime Achievement Award for his legacy and impact as a traditional musician.

“He was able to illustrate through performances and through his character that this music is a wonderful gift that we have to celebrate,” said Sheldon MacInnes, a retired teacher and Celtic music researcher at Cape Breton University.

“Preserving the music and sharing it and performing it will be another part of his legacy.”

Politicians in Nova Scotia expressed their sympathies after hearing of MacMaster’s death.

“He’s been an extraordinary ambassador for this province, for our culture,” said Premier Stephen McNeil. “It’s a sad day for the province.”

“He helped make the genre popular,” Corbett said in a statement. “It’s really no stretch to say that Buddy MacMaster did for fiddle playing what Eric Clapton did for the electric guitar.”

MacMaster’s son Allan is the Tory member of the legislature for Inverness.

Natalie MacMaster said she studied her uncle’s musical techniques or “Buddy-isms” while growing up, saying they had an incredible impact on how she developed as a musician.

“His legacy is the gift, the eternal imprint he’s left on the Cape Breton fiddle style, the gift that he’s given the world by his generosity with his music and the incredible human being that he was,” she said.

“If heaven is for anyone, it’s for Buddy MacMaster.”