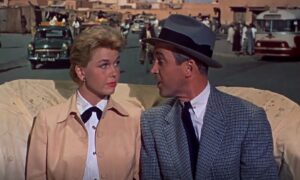 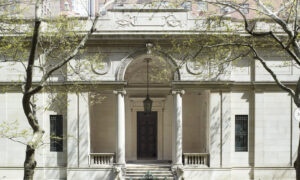 The audience were sad to see the artists wave their last farewell, and yet excited that they had seen the elaborate show in which China's artistic traditions were revived.

Ms. Antonia Schweighat, a former bank employee of credit and risk management at a German bank in Frankfurt, as well as a bank executive board secretary, was delighted to have come to see Shen Yun.

Ms. Schweighat said she loved all aspects of the show, and especially the dancing.

"I loved the show. It was so diverse and the dances were beyond description. Just thinking of the dance movements amazed me and made me think about the agility of the dancers. The movements were so soft.

"There was an intense emotional outburst and then the flexibility of the limbs—amazing! It is difficult to imagine that anyone can achieve such agility."

She noted the "strength of the men and the softness and vulnerability of the women."

Ms. Schweighat also enjoyed the digital backdrops. The interactive projected images are a unique feature of Shen Yun. Many of the backgrounds are animated to synchronize with the choreography and provide the landscape and setting to bring to life the stories behind each dance and song.

"It was rather amazing seeing the dancers appear on the backdrop and then suddenly on stage. Wonderfully done," she said.

{etRleated 55159}The Shen Yun Ochestra, with its combination of Western and Eastern instruments, was something unexpected, and the award-winning solo vocalists too were impressive.

Ms. Schweighat said, "The music is so inspirational and absolutely a pleasure to listen to. Also, the singers have a pleasing voice and it was very comfortable to listen to it."

Reporting by Nina Hamrle and Heide B. Malhotra.