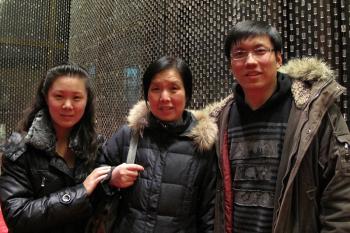 New Immigrant From Mainland China: ‘I am most touched by Dignity and Compassion

MONTREAL—In Montreal, on the evening of January 17, Divine Performing Arts (DPA) performed on stage at the Place des Arts to a sold-out Chinese New Year Spectacular show. The show’s beautiful music and dance, encompassing five thousand years of traditional Chinese culture, not only amazed the Western audience, but also comforted a homesick Chinese man who now feels very proud of his Chinese heritage after watching the show.

Mr. Tang, a new immigrant who arrived in Canada from mainland China just two years ago, was in the audience with his mother and wife. He said that Chinese people have no such  opportunity to enjoy such a traditional authentic show in mainland China, where only fashionable and government censored programs are  seen in the theaters. The DPA’s show places an emphasis on traditional Chinese culture, music and dance. The performer’s skills and art levels are very high.  Costumes are also very beautiful.

Touched by Falun Gong Practitioners in the Dance 'Dignity and Compassion'

Tang and his family members were deeply moved by the dance "Dignity and Compassion."  He said that the program genuinely displayed the kindness of Falun Gong practitioners, who, even when assaulted and abused, maintained a heart of truthfulness, benevolence and forbearance. "This is an extremely valuable message,” said Tang.  “In addition, the practitioner even protected the person who tortured her when he was going to be punished by God."

Tang's wife has been in Montreal for less than three months. "Although we are not too familiar with the spiritual practice of Falun Gong, we believe that one must show respect for another person’s beliefs," she said.

Tang noted that in China, people's values and moral standards are declining. DPA’s presentation of traditional Chinese arts and values is very commendable.

In the dance “Mulan Joins the Battle,” the two traditional Chinese values of goodness toward one’s parents and loyalty toward one’s country were well presented,” said Tang. “Modern Chinese people have lost many of these traditional values.”

Traditional Chinese Culture Is One of Great Dignity and Beauty

Mrs. Tang felt very happy to be watching the DPA show so soon after she joined her husband. “All I felt was kindness and warmth when I saw so many excellent Chinese performers on the stage at the DPA,” she said. “I was very conscious of the dignity and beauty of traditional Chinese culture as I watched the show. I also discovered that many western people like traditional Chinese culture very much. As  persons of Chinese heritage, we feel very, very proud. ”

Mrs. Tang was amazed by the energy displayed by the DPA performers. As for the piece “The Udumbara’s Bloom,” the story of a flower which blooms only once every three thousand years, she said that she learned a little more about this magical story. “This story remains amazing to me. I learned a lot about the Udumbara’s bloom from watching this show.”

Mrs. Tang added, “I am going to philosophize about the five-thousand-year Chinese divine culture passed on to humans by the divines and its influence on our human world.”

The DPA Builds a Bridge for Cultural Exchanges

The Tangs warmly praised the success of the DPA in advancing traditional Chinese culture. “In Western countries, many people are interested in Chinese culture,” said Tang. “But it is hard to find the best venue to present Chinese culture to Western society,” continued Tang. “I believe that  the DPA did a great job in achieving this objective.”

The couple wished all the DPA performers good luck and a happy New Year.