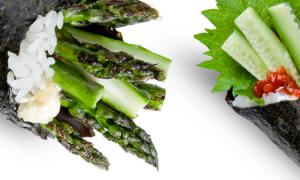 Jonathan Wu has worked in kitchens in France, Italy, and Spain, and closer to home, at Per Se and Le Bernardin. But it wasn’t till he became a private chef that he found the freedom to create.

“At first it was like Per Se food with some Asian ingredients,” Wu said. “But I realized that I didn’t want to be an imitator. I deeply value originality and soul. That led me to do a personal style of American-Chinese food that draws on my memories as well as techniques learned over the years in professional kitchens.”

What Wu developed while working as a private chef was a culinary vision for Fung Tu, an intimate eatery that embraces a modern seasonal approach to American-Chinese cuisine.

The cozy spot, straddling the border between the Lower East Side and Chinatown, features an eight-seat bar, as well as a dining room in the back, with intimate booths, over which hang glass lights. The back wall showcases local artists’ works.

Wu has introduced special dishes inspired by his family’s stories and experiences. He carefully crafts his dishes, imbuing them with flavor and depth.

His imagination seems limitless. Take for example the unforgettable Smoked & Fried Dates ($7). These are a tribute to his uncle who would tell him stories about 1950s Shanghai. But instead of Chinese dates, Wu uses medjool dates. These are then stuffed with duck in lieu of red bean paste and cold-smoked over fruitwood and fried.

Or the Sino-Indian inspired Sweetbreads Manchuri ($8), deep-fried and coated with ginger-sherry vinegar-soy-tomato sauce, with pickled cauliflower and bird’s eye chilies.

The Fava Bean Curd Terrine ($13) with its smooth, creamy texture and its delicious combination of pickled mustard cabbage, bacon, and chili oil was outstanding.

A nod to his aunt from Shanghai, the Masa Scallion Pancake ($15) is a hybrid between a Chinese scallion pancake and Mexican masa dough huarache with the salad. It is a fascinating blend of Shanghai and Mexico.

The Crepe Roll ($13), stuffed with tender braised beef, pickled cucumbers, and watercress, got my attention. The heavenly Savory Egg Custard with smoked chicken broth, with fried leeks, was very delicate and refined ($13).

Among the entrees, I was drawn to the tender, juicy, and delicately spiced Duck with Plum Sauce ($29) with fresh corn and baby turnips over rice. One can also find other inventive dishes like the Chinese Spaetzle with Sichuan Pork Sauce ($22) and the Brisket and Rhubarb Fried Rice ($23).

A terroir-driven beverage program by Jason Wagner (formerly of L’Atelier de Joël Robuchon) is something to explore as well.

Wagner has put together a special wine list focusing on terroir-driven low-sulfur wines from small producers, primarily from the Old World and California.

And rather than a pairing like a riesling, often recommended for Asian cuisine, Wagner focuses on the flavor profile of Chinese Shaoxing rice wines, which are nuttier, saltier, and sherry-like. By-the-glass options include vin jaune from the Jura, sakes, and different types of sherry, in addition to sparkling, white, rosé, and red wines.

There is also a reasonably priced six-course tasting menu ($60) with optional beverage pairing.