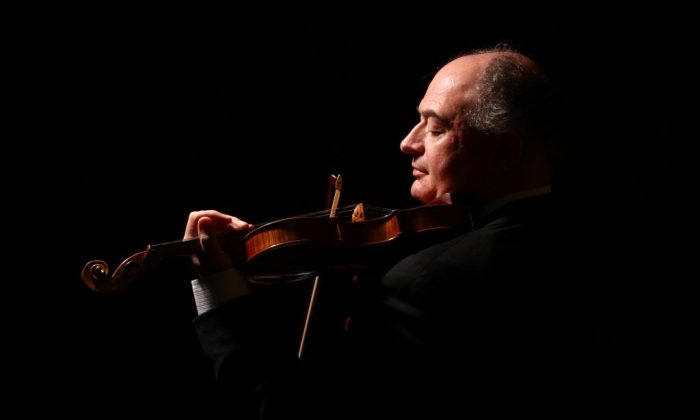 Ilya Kaler: One of the World’s Finest Violinists Today

“Do the thing, and you shall have the power,” Ralph Waldo Emerson said. Master violinist Ilya Kaler is the embodiment of this idea: He has the ability to do the thing.

I heard Kaler in a recent Chicago concert performance playing the fiendishly difficult Paganini Concerto, as arranged by the great Austrian violinist Fritz Kreisler (1875–1962). The work brought a twinkle to my eye, especially after hearing the harp enter during the brigade of violin leaps and arpeggios at the onset.

This work based on the Paganini D major concerto was transformed by Kreisler into a delightful work—it could almost serve as a prelude to a Franz Lehar opera. Incredibly difficult, it needs to be played with a charm that few but Kreisler could imbue it with, all while displaying trapeze feats of a daredevil sort.

The recordings of Kreisler playing his own works seem to evoke vignettes of his life. The elegance of a bygone age and heart-rending nostalgia of a childhood alive with sensibilities and filled with wonder are clear in these masterful performances. The adjective “jaded” is not even in his musical vocabulary.

And yet he is not a household name. Nor does it matter. Often an artist’s beautiful qualities can become tainted from pandering to what’s expected once they become famous. Often fame becomes a chain, forged from a series of gratifying ego games.

It is said that the level of string playing has improved over time. I am not sure about that. Perhaps the rank-and-file players hit fewer wrong notes at orchestra auditions now, but among the greats—absolutely not. The playing instead has deteriorated.

Early music performances have poisoned our taste for the greatest period of composing—the Baroque. In the past, full-bodied performances by masters reflected Bach’s romantic lines. Instead of beautifully dovetailed phrases, we are now pacified by impotent ghastly swells and clichéd ideas that players adhere to like a car manual. We are left with premeditated pseudo-intellect that has replaced heart, which, unbelievably, is shunned.

In recent times, PR teams and event organizers concoct box office tricks and market those who play faster and louder by concentrating on the outfits, the hairdos, the swaying back and forth onstage, to sells tickets.

What does that have to do with music? Why does pure artistry and mastery of the craft take a back seat to show biz antics?

Perhaps we are bored, narrow, exhausted human beings needing to impress our friends with just how smart we are—without our having any real knowledge. Perhaps it is an easy solution to jump on the bandwagon of the latest star.

In the past, the true test—aside from intonation and terrific facility (which is almost a given)—was a gorgeous sound and the innate ability to turn a phrase so as to capture the magic of the composer’s intent.

In the past, all was stripped down, and form and elegance without distractions mattered.

In the past, it was a hallmark of the greatest artists to see who in fact moved least and who played most beautifully.

In the past, the best playing not only reflected the composer’s intent but also stamped the performance with the fingerprint of the individual player.

Kaler is a man of the past. Born in Moscow in 1963 and trained at the Moscow Conservatory, he studied with Leonid Kogan, Victor Tretyakov, and the lesser known Abram Shtern.

In Kaler’s art is revealed a very sensitive human being and a prodigiously gifted violinist. How refreshing that such a worthy player as Kaler pays tribute to this bygone Golden Age.