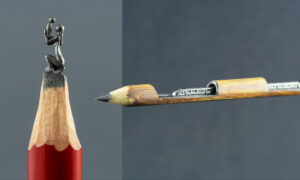 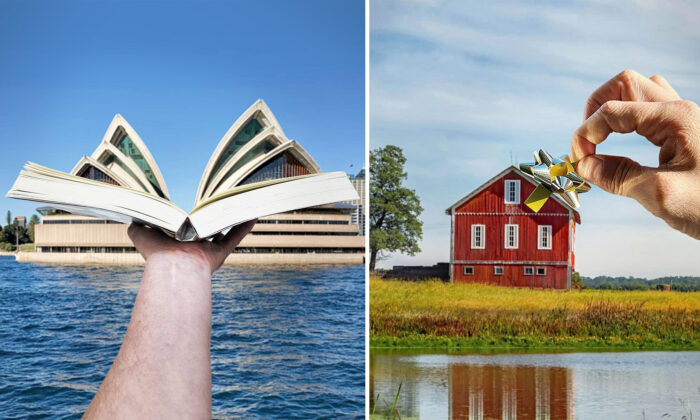 A 31-year-old photographic artist in Germany has been making a splash on social media with his inventive illusionistic juxtapositions.

Hugo Suissas, originally from Portugal, works as an art director at a German creative firm. On the side, the artist has a passion for imaginative photography—playing with perspective to compose iconic works reminiscent of surreal paintings by Salvador Dali or Rob Gonsalves.

In his childhood, Suissas used to practice magic as a hobby, sparking his love for illusion.

“I have started to use perspective in my photos, when I realized that it was a great technique to convey an idea and get a reaction from the public,” Suissas told The Epoch Times. “I believe that it was my ‘magic’ childhood that inspired me to do what I do today.”

Suissas has worked in the photography industry for the past 9 years; his desire to spawn unique and original images that have yet to be seen drives his creative endeavor.

“I often take pictures of street scenes that I find interesting and keep on my cell phone for months and months. And only later do I have an idea of this place that I saw months ago,” he said, adding that there is no specific theme behind his compositions.

Suissas boasts a prolific portfolio, but among his favorite works is a picture he took late March in Libson’s Praça do Comércio public square—depicting an imaginative interaction between a classical arch and a hand, using negative space to conjure a lightbulb from thin air.

This iconic work effectively raised the bar for future projects. “It raised the criteria I have with myself to another level and made me more demanding for the next creations,” he said.

As much as Suissas enjoys his work, the biggest challenge he faces is generating ideas for new photos worthy of that standard. He embraces simplicity as the secret ingredient, the wellspring keeping his inspiration aloft.

“I would say that perfect composition is non-composition. In my photos is the composition of only one element—simplicity,” he said.

And the response to his work—which he strives to keep relevant in the world today—has been both abundant and largely positive, in the form of comments from his followers and interactions online.

Hugo Suissas doesn’t focus on pleasing the masses so much as making what he considers artistically relevant works, he said, as public opinion tends to spoil the focus of an artists in his creative process.