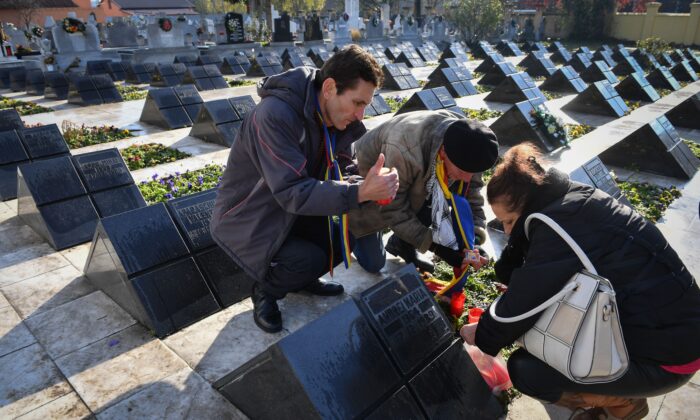 People light candles at the Heroes of the 1989 Revolution Cemetery to commemorate the 30th anniversary of the Romanian revolution's first victims in Timisoara, on Dec. 15, 2019. (DANIEL MIHAILESCU/AFP via Getty Images)
Slice of Life

Ileana Johnson: From Communist Romania to Defending US Freedom

America is forgetting what it means to be America, and that’s not a joke, says Ileana Paugh Johnson, whose arrival to the United States is one of her best memories.

Johnson grew up in communist Romania and knows intimately the ills of a socialist society; over her years as an educator, she’s seen how quickly communism’s lies can take hold.

“All youth, born in or around the fall of communism in Eastern Europe in 1989, those whose parents and grandparents survived decades of socialism tyranny under the boot of the Communist Party, suddenly became socialists, using the same playbook about the wonders of socialism as in America. How is that possible?” she said.

Johnson says the answer is quite simple. They’ve taken the same playbook used to implement communism in Europe, and it’s working like a charm in the United States.

“My first impression, as an inquisitive mind, was that when a child did not behave properly—and properly is defined as what the Communist Party deemed as proper behavior, they would get a bad grade in behavior. And believe it or not, there was a subject in school called behavior,” Johnson said.

Parents were always incredibly careful about what was said around children; something casually repeated by an innocent mind might be reason enough to haul a parent off to jail if it didn’t fall in line with what the Party deemed acceptable.

At school, students sat in straight rows with hands behind their backs. It felt primitive; they weren’t there to learn, but to behave, and if they didn’t, they were hit or slapped in the face by teachers.

If a student did get a low score, she said, the child’s parents would have to come down to the school for “an obvious, embarrassing dress down in front of everybody, because they did not raise their child properly.”

Still, even as a child in Romania, Johnson had an impulse to accumulate and impart knowledge to other people. She wanted to be a teacher, one who taught information, not behavior.

Johnson’s parents weren’t Communist Party members. Communists had confiscated her grandparents’ farm, her parents’ home, and all of their possessions.

“They were moved to a concrete block apartment with nothing much in terms of possessions and they received an “egalitarian” salary, which was about $40 a month,” Johnson said. “They understood what communism was, and they understood the rhetoric. So they didn’t want any part of it.”

Of course, that also meant they suffered more for it.

“They were always harassed more than other citizens because they were not [Party] members. They were automatically considered bad,” Johnson said.

Johnson was nearly 20 when she came to the United States, after she’d married an American citizen. She remembers coming out of John F. Kennedy International Airport in New York dazzled by the lights and the freedom—and just that she wasn’t being followed everywhere by the police.

“I wanted to kiss the ground,” Johnson said. She would have, had it not been frozen, as it was in January. New York was only the first stop, on her way to a Southern town where she would live.

It didn’t take long to see that communism was spreading its roots in America too. In the early 1980s, Johnson sought work as a substitute teacher and immediately encountered copious amounts of ominous red tape, which she found reminiscent of the communist bureaucracy state she was familiar with.

She was told she would have to be licensed to be a teacher, and then she learned all about what licensing entailed. Universities are famously left-leaning, and the teachers college where she sought her credentials wasn’t any different. Johnson saw how teachers could be indoctrinated into an ideology, and then sent off to further indoctrinate students. It was also obvious that the ideology was socialism.

“In 1989, the so-called communism fell, but it didn’t really fall—it kind of regrouped itself and morphed into this global communism,” Johnson said.

In 1989, Johnson’s father died in communist Romania the day before she graduated with her doctorate; a few months later, Romanian communist leader Nicolae Ceaușescu was tried and found guilty of genocide, and was executed for his crimes.

Johnson’s mother defected, and lived with Johnson’s family for a time. She taught Johnson’s daughters the Romanian language, and about the realities of life there under communism.

“I even took my oldest daughter [to Romania] when she was 5, and she understood enough at that age,” Johnson said.

“She remembered all the shortages of food. This was in 1985 when we went, and there was still communism then, and it was the worst it’s been, under Ceausescu. And of course, Romania had the worst version of it, because of who was in power. My children know very well what communism was like.”

As a teacher, Johnson taught economics and various languages to 11th and 12th grade and college students. She could see they too had learned about communism as children—in a different way.

“They were so indoctrinated by the time they reached me,” Johnson said, remembering the students’ Che Guevara T-shirts and casual denigration of America. In the beginning, it shocked her how little Americans understood of their own civics, how the government operates, and how the economy works.

“They were already indoctrinated, and you cannot change their minds unless you place them in a communist society for a few months and let them see for themselves and suffer what it’s like to live under a dictatorship.”

When a poll came out a few years ago showing the younger generation’s majority support for socialism, Johnson wasn’t surprised at all. She says people born around 1989, even in Romania, have been indoctrinated into thinking that socialism is good.

That’s because the same people who wrote the slanted textbooks in America have brought those textbooks into countries around the world through NGOs, Johnson said.

“International baccalaureate schools were also brought in, which shaped the first generation of globalist citizens, who reject their own history and nationalism to the benefit of global collectivism,” Johnson said.

She met several Romanian students who she said “became the young leaders of a country which had just shaken the yoke of dictatorship but elected yet again more of the former communists to power. These communists had repackaged their images and fooled the electorate who had no history of a democracy to fall back on, they were still beholden to decades of meager welfare dependency to the point of nostalgia.”

Today, Johnson is keenly aware of all the aspects of society in which communism has planted seeds. It was about 10 years ago when she started doing such research.

Johnson retired in 2008 and moved to Virginia, where she had several friends coming up against property rights issues, which were tied to Agenda 21 being brought to their locale. Johnson started seeing Agenda 21 everywhere, and decided to look into it.

“Then I started researching more and more, and a lot of things that made me uncomfortable, because it 100 percent had elements of property confiscation and nationalization—as [what] happened under the socialist tyranny that people in my country in Romania had to live under for decades,” Johnson said.

Agenda 21 is a “sustainable development” action plan drafted by the United Nations, detailing a myriad of goals pertaining to how society should be organized.

“I read thousands and thousands of pages,” Johnson said. “The document itself that was issued in Rio [de Janeiro in 1992] is about 40 chapters.”

Environmental conservation is a seemingly benign topic, and Johnson is all for conserving natural resources and not abusing them, but this wasn’t what she was reading in the plan. This was all about central planning—a key tenet of socialism, leading the way to communism. Under the guise of being environmentally friendly, comprehensive land use plans are drawn up with the goal of eroding private property rights. The jargon itself may be complicated, but the idea is not. It is the same thing that has played out in every socialist country.

“Sustainable development” sounds innocuous. It’s defined as development that meets the needs of the present without compromising the needs of future generations. Here’s the important question to ask: Who decides? Who gets to decide what the present needs are, what the future needs are, and what that compromise looks like? This is central planning.

“I started recognizing it, that it’s starting at the local level all the way up to the United Nations, which has infiltrated itself already in our society,” Johnson said. Smart meters, green building certifications, and conservation easements are a few of those commonplace and innocuous sounding things that can pave the way for collectivism. Then there are outright stated goals like “redistribution of population based on resources,” which was how communist Romania justified confiscating Johnson’s parents’ and grandparents’ homes and land.

From there, Johnson started speaking to groups here and there about what she was learning. Not everyone had the time to read thousands of pages of such rhetoric, and she was more than happy to pass on this knowledge.

“Most of this is pro bono work,” Johnson said. “I do it because I feel like it’s my way of paying back my adopted country for giving me the opportunity to have a good life. And I certainly have worked very hard to be where I am; nobody has given it to me on a platter the moment I waltzed out of the airport at JFK.”

Johnson worked minimum wage for $3.10 and ended up becoming a college professor with a doctoral degree—something she never would have been able to do in communist Romania because her parents were blue-collar workers, the proletariat, and not Communist Party members.

“I love America, because you can have the opportunity to be what you want to be,” she said. She has traveled to many countries, and to many places all over the country, and seen little pockets where education still thrives, but it is “just few and far in between.”

Education is crucial, because the multibillion-dollar public education system is teaching students to be ashamed to be American, “to be ashamed of the color of their skin or to be ashamed of all the things that America has done for the good of the world.”

Johnson asked, if they’re being taught to hate the society they live in, then how can these students then go on to do good for society? “We have to change that.”

Johnson’s greater hope is that the education system can be overturned, but for the moment she is doing her part to educate her fellow Americans.

“Eventually, they forget everything about who they are and where they came from and who they’re related to,” Johnson said. “And it’s a sad day, because they’re no longer the human beings they were born to be.”

“That’s how we are, we’re getting to that level in our country,” Johnson said.

Growing up in a communist society, you learn to be pessimistic because you’re disappointed time and again, Johnson said, so it’s hard to take an optimistic view.

“Generally by nature, I’m a realist,” Johnson said. “But I have learned to be more optimistic in this country because so far, it has been a good life for so many of us who have immigrated to the United States and have become American citizens. And we have tried very hard to make America better.”