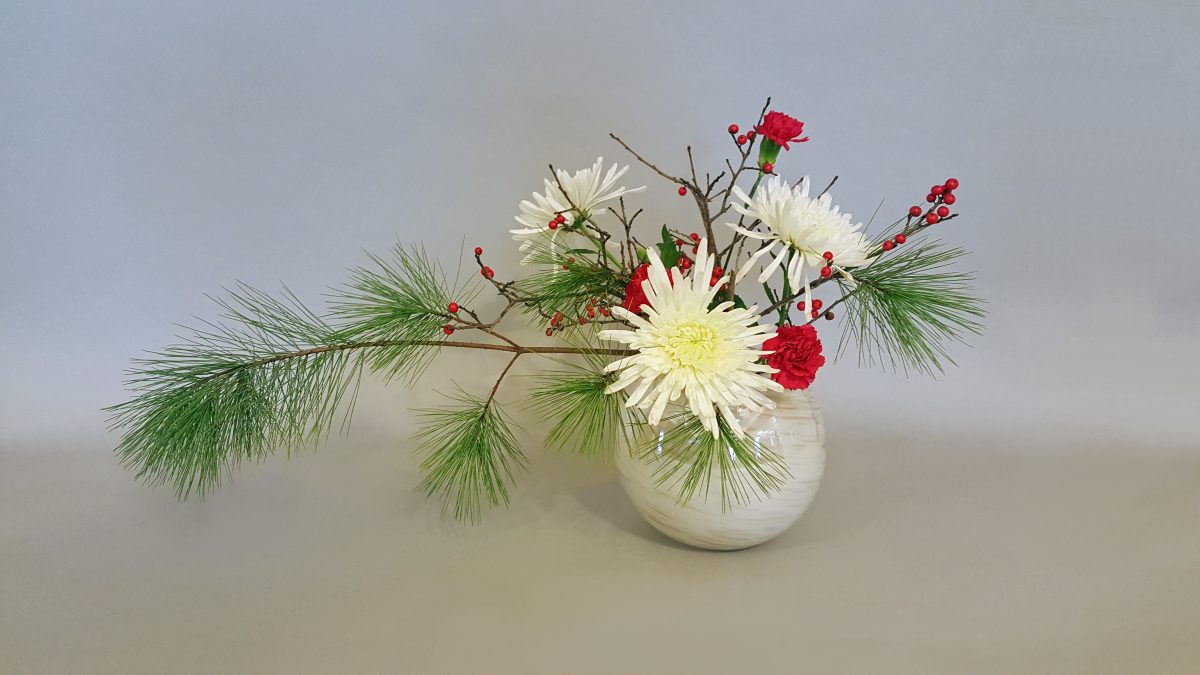 This undated photo provided by Lauren Paul shows an example of the Japanese flower-arranging tradition of ikebana. While Western floral design typically emphasizes flowers and color, ikebana is more focused on the sculptural lines, proportions and shape of the arrangement. Paul is president of Ikebana International's Detroit chapter. (Lauren Paul via AP)
Arts & Tradition

BY The Associated Press TIMESeptember 15, 2016 PRINT

Ikebana is the Japanese art of flower arranging. It’s a tradition that goes back centuries, and its design principles are governed by specific rules and techniques. But as with any art, creativity and self-expression are part of the process. And while it takes years of study to earn teaching credentials in ikebana, it’s possible to pick up a basic introduction to the craft in a lesson or two.

Not Just About the Flowers

For Westerners accustomed to vases overflowing with blossoms and rich colours, the ikebana aesthetic can be hard to grasp.

“Usually the flowers are not as prominent as they would be in a Western-style arrangement,” said Lauren Paul, president of the Detroit chapter of Ikebana International, an organization that has 165 chapters in more than 50 countries.

Instead, the focus of an ikebana arrangement is typically on the sculptural line created by the tallest branch and the space around it. Most arrangements have just a few flowers, and always an uneven number of them. The overall impression is minimalist and asymmetrical, yet harmonious and balanced.

The ikebana philosophy also stresses an appreciation of nature. Part of learning the craft involves “looking around and noticing plants in a different way, and saying, ‘I bet I could use this in my arrangement,'” Paul said. Seedpods, ornamental grasses with plumes, evergreens, moss, buds, and leafy stems are all fair game.

Ikebana originated in the Buddhist practice of offering flowers at temple altars. Monks began creating elaborate arrangements with the flowers, and the tradition spread.

The proportions that govern traditional ikebana designs are still described in terms of religious symbolism. The tallest branch represents heaven. A second stem that’s two-thirds the height of the tallest element represents man. A final component, symbolizing earth, is a third smaller than the middle-size element, hovering near the base of the arrangement.

Look for the Line

Creating an ikebana display involves identifying the most powerful, eye-catching lines of your design, and then manipulating the components to emphasize the strongest angles by gently bending stems and trimming leaves. Just as you would revise and improve a drawing, sculpture, or poem, creating an ikebana display means considering, reconsidering, and tweaking your design over and over.

“The philosophy behind the study of ikebana is that it is a meditative art and that your inner self comes out in the arrangement that you make,” Paul said.

She suggests looking at the line created by the dominant branch as if it were a brushstroke on a painting. You’ll want plenty of empty space around that line to highlight it. That means cutting back any stems or leaves that interfere.

The hard part for beginners, once you start trimming, “is knowing when to stop, knowing when it’s finished,” said Paul.

So, go slow with the clippers. You don’t want your arrangement to be too spare.

For those interested in learning more, ikebanahq.org is a good place to start. You can see examples of different styles on the site and find a local chapter to ask about classes. Among the many books on the topic, Paul says a good guide for beginners is “Ikebana: The Art of Arranging Flowers” by Shozo Sato and Kasen Yoshimura.