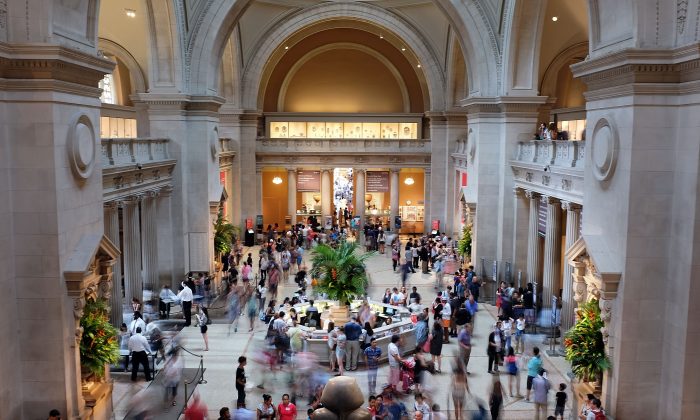 Hundreds of people walk through the Great Hall at the Metropolitan Museum of Art in New York City. (Photo by Spencer Platt/Getty Images)
New York

NEW YORK—Mayor Bill de Blasio’s administration announced on Dec. 14 that it is extending the free enrollment period for its municipal IDNYC card program till the last day of 2016.

This means that New Yorkers can apply for their IDNYC cards (that normally would cost) free of charge, if applied for before Dec. 31, 2016.

The ID program initially allowed New Yorkers to show up at enrollment sites without an appointment, but due to the high demand and backlog of applications it was switched to appointments only.

The program, now in its second year, has garnered an unexpected 670,000 enrollments, with 160,000 cultural memberships redeemed so far.

Mayor de Blasio said the program has grown to be the leading municipal identification program in the country, and it will continue to grow.

“Even more New Yorkers will be able to join the ranks of IDNYC cardholders in 2016 absolutely free, so that every city resident has the confidence to interact with law enforcement, enter a government building, or pick up their kids from school.”

The IDNYC card gives holders access to all city buildings and is accepted as a form of ID for accessing city programs and services, regardless of immigration status.

Apart from the previous 33 institution partners, the program now adds the Solomon R. Guggenheim Museum, the Museum of Modern Art, the New Museum, the Metropolitan Opera, the Museum of Chinese in America, BRIC Arts, and Pregones Theater to that list.

The first year of IDNYC, we heard countless stories of New Yorkers empowered through the program.
— Nisha Agarwal, commissioner of the Mayor's Office of Immigrant Affairs

The free yearly membership packages do not apply for those who already have an existing membership with a participating institution, or whose membership lapsed since Jan. 1, 2012. Some institutions may not offer memberships to cardholders under the age of 18.

Anyone who is 14 or older can apply for the government-issued ID card as long as they bring proof of residency and identity.

Cardholders are also given access to a range of discounts on entertainment, prescription drugs, fitness and health centers, and supermarkets.

If you are a U.S. veteran, your card will provide added benefits by connecting veterans to more services and discounts.

However, there are some limitations to the IDNYC card. You can’t use it as a driver’s license or as proof of identity to get a driver’s license. The card also does not let you purchase alcohol or tobacco products, to receive public assistance benefits, or travel on an airplane.

Although participating banks and credit unions will accept your IDNYC card as a primary form of ID, not all banks accept the card as valid identification, and it is not considered as a work authorization permit.

Nisha Agarwal, Commissioner of the Mayor’s Office of Immigrant Affairs, said in a press release that the ID program has benefited a diverse range of New Yorkers:

“In the first year of IDNYC, we heard countless stories of New Yorkers empowered through the program, including teenagers who did not previously have access to ID, and immigrant mothers who can now enter school buildings and participate in their child’s school with confidence.”