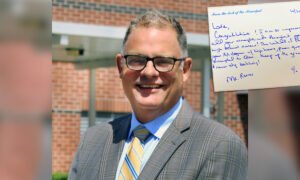 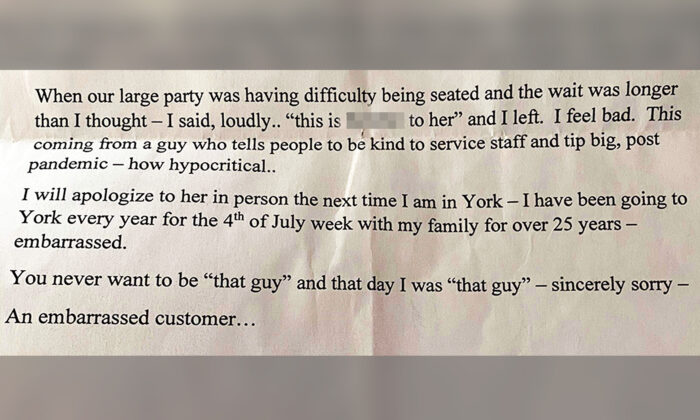 ‘I Was Very Rude’: Man Sends Apology Note and $100 Tip to Restaurant Staff for His Behavior

A manager and hostess at a restaurant in York Beach, Maine, was really touched after she received an apology letter enclosed with a $100 tip from an anonymous customer who had been rude to her while he visited the restaurant she works at on the Fourth of July weekend.

“It’s very heartwarming, it’s a very nice thing to do,” Tammy Stirk Ramsey, 50, who works at Union Bluff told The Epoch Times. “It’s the first time that’s happened. And it was really touching. It made me feel good.”

The letter referred to an incident that occurred on July 5 at around 5–6 p.m. The man—who was with a large party who were having difficulty being seated—yelled at Ramsey and her colleague Michelle Kender at the podium and left because the wait was longer than he expected.

Ramsey, who has been working with the restaurant for the last almost-25 years, has gotten accustomed to dealing with some tough customers from time to time, owing to the nature of her profession, and says that she doesn’t let their behavior affect her as she doesn’t get hurt easily.

“There’ve been so many people who have said almost the same thing who have been kind of rude, so I’m not 100 percent sure I remember who exactly he was,” Ramsey said.

However, Ramsey, who continued with her day unfazed, was touched to receive the letter.

“I was very rude to her—which is out of character for me—I have way more respect for people than I showed that day,” the man wrote. “I feel bad. This is coming from a guy who tells people to be kind to service staff and tip big, post-pandemic— how hypocritical.”

The man even explained that the pre-dinner cocktails could have contributed to his misdemeanor, adding, however, that it should be “no excuse.”

Along with the heartfelt apology, the man, who signed off as an “embarrassed customer,” also added that he would apologize to the staff at Union Bluff in person the next time, as he has been a regular visitor of York for the last 25 years.

Ramsey told The Epoch Times that she believes the man was genuinely apologetic for his mistake.

“[​​It] goes a long way, with people owning up to having a fault and making a mistake,” Ramsey said. “Everybody makes mistakes … [but] not everybody apologizes for them or owns up to it. So [it’s] commendable.”

Touched by his gesture, Ramsey decided to share the letter on a Facebook group called Seacoast Eats, which includes people such as restaurant workers, restaurant owners, and even customers, and the post went viral, amassing over 2,000 reactions and over 300 shares.

Ramsey wrote: “Sometimes good people just make bad decisions, but he was man enough to admit it and correct it.”

A lot of people have reacted to the post, said Ramsey, with some people sharing that they themselves have felt the need to write a letter to somebody. However, none have received a letter of this kind.

“Everybody had a little story to share about an incident,” Ramsey told The Epoch Times. “People being angry at them, and apologizing, but not writing a nice letter and tipping.”

Ramsey’s boss, Elena, shared the tip equally with both Ramsey and Michelle.

Owing to the pandemic, in the last 1 1/2 years, Ramsey believes it has been especially challenging for the restaurant and hotel industry to deal with manpower issues; whilst also trying to keep the customers as happy as possible along with abiding by Covid restrictions.