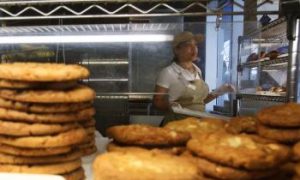 ‘I was pleasantly touched by the colors’

By Epoch Times Staff
Print
LUDWIGSBURG, Germany—After a beautiful spring day, theatergoers were looking forward to seeing the grandeur of classical Chinese dance and music being presented by New York-based Shen Yun Performing Arts Touring Company at the Forum am Schlosspark on April 21.

Shen Yun, founded in 2006, has a mission to revive the true cultural heritage of China. The production celebrates the dynasties, regions, and ethnic diversity of the vast Middle Kingdom, and honors the moral ideals of the ancient culture and its reverence for the divine.

Mr. Franck Eckhardt, an area representative in the electronics industry, had come along without any expectations and was pleased with what he experienced, he said.

Mr. Eckhardt enjoyed the colors and how they were used throughout the show. "I was pleasantly touched by the colors and their arrangement in the show. … There is something elusive in the pink and lilac; very enjoyable."

He was especially impressed by the dance, Plum Blossom, with its beautiful display of decorated pink fans that took on the appearance of the much loved plum blossom. According to the program, Chinese people are fond of blooming plum trees. Though the blossoms are tiny, they demonstrate their resilience and bloom even in snowy weather and are a hopeful harbinger of spring.

Mr. Eckhardt said he finds Chinese culture fascinating because of its age.

"The show depicts Chinese culture—with dance, music and historic vignettes. It is difficult to classify. And to make a 5,000-year circuit—amazing!"

Mr. Eckhardt's theater companion was not familiar with Chinese culture, but she said, "The show was lovely."

Shen Yun Performing Arts will perform next in Stockholm, Sweden and then Vienna, Austria. For more information, visit ShenYunPerformingArts.org