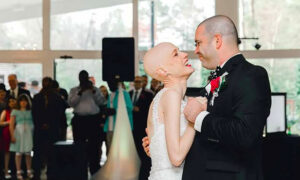 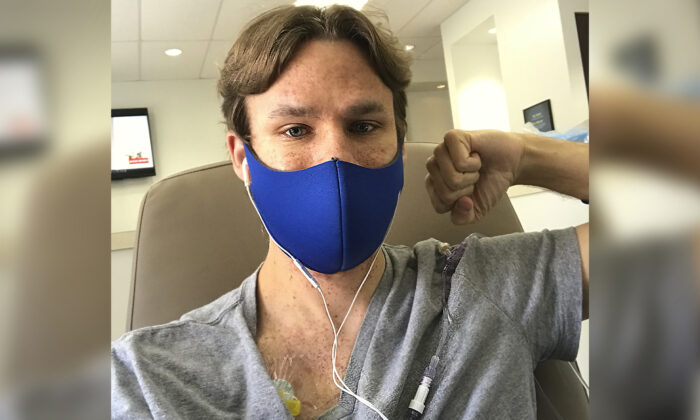 Cancer-stricken College Grad Gets COVID-19, Proposes to Girlfriend Amid Chemo

A cancer diagnosis at the age of 24 left Evan White, of Dallas, Texas, in a state of shock. White having ignored subtle symptoms, assuming he was too young to contract a serious illness, “colon cancer” felt like a bad dream the college graduate couldn’t wake up from.

Now 27 and still undergoing chemotherapy, White wants others to know that young people can be vulnerable to colon cancer, too.

“I was basically invincible,” he admitted feeling to Today. “I never went to the doctor … I never thought I needed to go tell somebody about this.”

White had noticed occasional blood in his stool throughout college, but it didn’t persist, so he didn’t worry. He had no history of colon cancer in his family. But then, he noticed becoming plagued by chronic fatigue.

“I had always been in good physical shape,” he explained. “I could play pick-up basketball with my friends, maybe for one or two plays, and then I would absolutely be gasping for air. I could barely even run.”

It wasn’t until he contracted a sore throat and fever that White finally made an appointment to see a doctor, who drew blood and took a stool sample. “[M]y blood counts were off,” White recalled.

He admitted he may never have even told his doctor about having blood in his stool if the doctor hadn’t insisted upon thorough testing. Confronting a diagnosis of colon cancer, White’s team arranged surgery and six months of chemotherapy, after which he celebrated a year of remission.

But sadly, in February 2019, the cancer returned, this time stage 4, and White had just started a fundraising drive for colorectal cancer research.

By then, the cancer had spread to his lungs. Surgery in November 2019 briefly subdued the tumors. But they grew back. Meanwhile, his fundraisers had raised upward of $20,000.

In July 2020, his health took another hit when he contracted a mild case of COVID-19 alongside his parents and partner, Katie Briggs. He struggled and recovered; at the time of writing, his ongoing chemotherapy is keeping his condition stable.

White made the courageous choice to take each day as it comes and enjoy every moment with loved ones, a strength he admits he didn’t possess before his diagnosis. On Oct. 2, he even asked his love to marry him—the couple had met two days before he first started chemo.

“I don’t know where I would be if I didn’t have someone to help me go through stuff,” the young man reflected.

Now, he advises others not to be afraid to seek consultation in the event of any suspicious symptoms—such as rectal bleeding, iron-deficiency anemia, persistent pain in the abdomen, narrow stools, and unexplained weight loss. Major symptoms of the cancer progress quickly, and routine screening starting at the age of 45 is recommended.

Colorectal cancer is the third most common cancer in both men and women in the United States, according to the CDC. Adults in their 20s and 30s are gradually being diagnosed with more frequency. Awareness is considered to be the best form of defense.

“Being able to speak up and talk with your doctor can help catch some of this stuff before it progresses,” he explained. Meanwhile, the stoic fighter told NBC that he’s keeping his chin up.

“I’m ready to take on headstrong whatever lies ahead of me with a smile on my face,” he said.