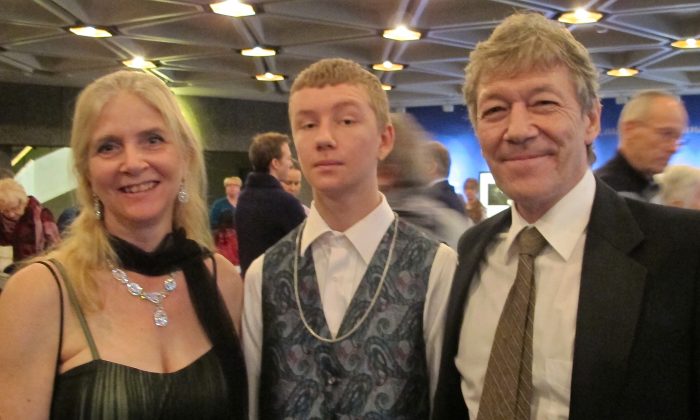 OTTAWA, Canada—Shen Yun’s music, produced by a live orchestra that includes Chinese instruments, wowed musician Karl Reznick on Saturday afternoon at the National Arts Centre—but then so did everything else about the show.

“I really enjoyed the show—it’s amazing! So is Chinese classical dance, it’s amazing, I just love it,” said Mr. Reznick, who played in a band for 40 years at venues in Ottawa, Toronto, and Montreal.

“I love it,” he said of the Shen Yun Orchestra. “Especially the traditional instruments, the sounds they produce, from the coughing of the horses, the neighing and whinnying of the ponies—it really invigorates the steps of the dances, I find.”

Classical Chinese dance, known for its incredible flips and spins as well as its gentle elegance, is at the heart of the Shen Yun Performing Arts depiction of traditional Chinese culture.

Mr. Reznick was impressed by “the choreography, the sets, and the costumes, and the complexity of the steps, and everybody in unison…”

“And it also teaches a very important message, one of the soul—how all men are equal and how we should enjoy the creations of God, that’s what I’m finding,” he said, adding that he appreciated the spiritual aspect of the show.

“It’s beautiful,” he said. “I have always been drawn to Chinese culture. … I saw [Shen Yun’s] message there and I was very intrigued. I wanted enlightenment.”

He especially liked “The Power of Compassion,” a piece set in contemporary times that depicts the injustice and brutality of a modern-day tragedy in China—the ongoing repression of adherents of Falun Dafa, a spiritual discipline rooted in ancient Chinese culture.

The mission of Shen Yun is to revive traditional Chinese culture through the performing arts—a culture that embodies traditional values like loyalty, compassion, filial piety, and respect for the divine.

Mr. Reznick added that the values lived by in ancient times “should always be important in society.”

“I think somehow it gets trampled underfoot and forgotten on purpose, maybe the governments do it, maybe the society does it to itself, I don’t know. But [Shen Yun is] the great reveal of bringing back the light.”

Reporting by Donna He and Joan Delaney.