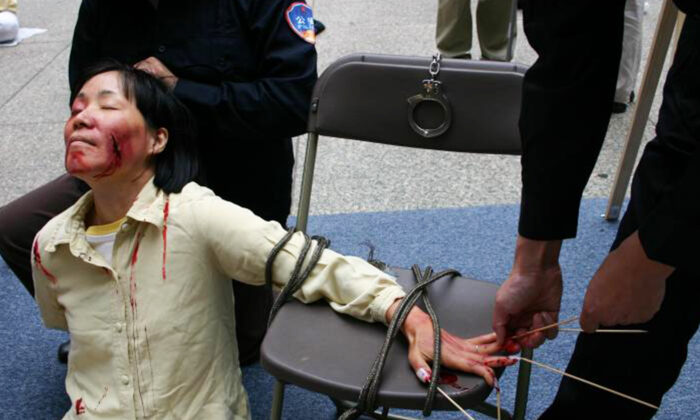 Reenactment of one of the torture methods employed by Chinese officials to coerce Falun Gong practitioners to renounce their faith. (Minghui.org)
People

‘I Told Myself That I Wouldn’t Die’: Chinese Woman’s Resilience in the Face of Brutal Torture Over Her Faith

A Chinese woman braved through hellish abuse and physical assault to honor her spiritual belief rooted in the universal principles of truthfulness, compassion, and tolerance.

Li Erying, of Qiqihar city, in Heilongjiang province, China, was incarcerated for four years without her family’s knowledge in a trial that she herself knew nothing about until she was taken to the court. She was persecuted endlessly for refusing to give up her faith or submit to the Chinese Communist Party’s (CCP) draconian atheistic ideologies.

The torture she endured included being brutally beaten by criminal inmates to the point that she was on the brink of death and being force-fed for a long period of time.

Li, who began practicing the self-cultivation practice of Falun Gong (or Falun Dafa) in 1996, has been arrested multiple times and sent to forced labor camps twice. The communist regime didn’t even spare her family members, who have also been implicated and continue to face imminent danger and constant harassment from CCP officials.

Falun Gong is a spiritual meditation system that grew increasingly popular in China in the 1990s. It has been violently persecuted by the Chinese regime since July 20, 1999.

Li, a law-abiding citizen, was arrested on Nov. 4, 2015, for practicing Falun Gong. She was sentenced to four years in prison by the Longsha District Court in Qiqihar city, reported Minghui.org, a U.S.-based all-volunteer organization that reports on the persecution in China.

She was taken to Prison District No. 11 on June 8, 2016, and was incarcerated at the Women’s Prison of Heilongjiang Province, where she underwent severe torture.

The journey of unprecedented abuse all began with a criminal inmate named Fan Xiumei—who managed 200 prisoners—trying to force Li to wear a prison uniform. However, Li, who, unlike other inmates, was arrested for her faith rather than for any offense, refused to comply.

Later, a police officer began slandering Falun Gong in front of Li and instructed the inmate to make her sit in “military-style” on a small, uneven stool that was only about 5 inches high. It is a routine torture method used to inflict pain, cause extreme tiredness, and restrict movement.

“I had to put my hands on my thighs, sit upright, and look forward,” Li recalled in her personal account. She mentioned that the inmate told her, “Don’t blink, don’t open your mouth, don’t move. You can’t even blink once.”

Li was confined to this position up until 10 p.m. and wasn’t given any food, nor was she permitted to wash. “If I moved even a bit, I was kicked and beaten,” she said.

However, this was just the beginning of the inhumane torture commonly faced by imprisoned Falun Gong practitioners.

Li was made to sleep on an upper bunk bed with Fan monitoring her every move. When she woke up to practice the Falun Gong tranquil meditation in the wee hours of the morning, another inmate picked up a stool and began to beat her. They even tried to cover Li’s mouth but failed; that day she endured beatings from different groups of people.

“I was pushed off the upper bunk,” Li said. “All nine people in the room started beating me and wanted to tie me up. I can’t remember how many times I was beaten that day. Those people were well-trained thugs who did this as a profession.”

Fan even instructed other inmates to beat up Li badly and warned them that if they didn’t, their points would be deducted or, worse yet, their sentences would be extended further.

One inmate took Fan’s words so seriously that she began to pinch Li. “She pinched me all over, especially my nipples, bruising me all over,” Li said.

Another inmate took it further; she took a shoe and hit Li on the face until her nose began bleeding. After that day, to protest her illegal arrest and persecution, Li went on a hunger strike. However, the captain successfully instigated the inmates to escalate the torture and make it worse.

“They found 15 or 16 inmates and declared that they will have me ‘transformed,’” Li said. “They stood in two rows and started beating me. Some pulled my hair, some twisted my arms, and some slapped me until I was knocked to the ground. I fainted.”

When Li gained consciousness, she found a shoe lying on her face and the floor was completely wet. “I realized that my hands were swollen and I couldn’t move my right arm or lift my legs,” she said.

After only four days in prison, Li had lost the ability to care for herself, but she refused to renounce her faith. Seeing her unwavering stand, prison officers then made the torture a step more brutal.

Li was strapped in a “straitjacket” and tied up to the bed for three days and two nights, with a few people monitoring her around the clock; she was not allowed to close her eyes. When the guards still failed to weaken her determination, they continued to escalate the abuse.

“The police took two straitjackets and tied my hands, legs, thighs, and waist tightly and put a small stool under my buttocks. Whenever I shifted, the stool would go over on its side,” she said. “It was unimaginably painful.

“I was hung up for eight hours, until nighttime when I was force-fed,” Li said. “By this time, I had no feeling in my limbs and my heart beat erratically. I didn’t have the energy to open my eyes.”

“I Didn’t Commit Any Crime”

The persecution of Li only worsened with time.

She was unable to close her mouth, as it was so swollen from all the beatings. Inmate Fan even rubbed Li’s teeth with her shoes and used a broomstick to poke her eyes. Her arm was dislocated due to the constant abuse and physical assault. And as she wasn’t allowed to wash for several days, she smelled bad.

“In an attempt to force me to give up on the hunger strike, the police instructed the medic to put the tube into my trachea. I nearly suffocated,” she recalled.

“Several people pinched my nose and force-fed me. The feeding tube broke my nose and caused excessive bleeding. I was bruised all over but still forced to sit on the stool. When I couldn’t, an inmate would pull my hair while another stomped on my feet to force me to sit upright.”

Going through endless torture, Li still refused to dishonor her faith. The police then instructed her inmates to play brainwashing DVDs that slandered Falun Gong.

On Aug. 1, 2016, when Li’s son and family visited her at the prison, they were shocked at how emaciated she had become and requested that she be taken to a doctor.

“I was taken to a hospital, where the doctor said that I had high blood pressure and severe heart disease, and should not be beaten anymore,” Li recalled. “That I could die at any time, and that I really should be admitted to the hospital.”

Li recalls being severely emaciated and malnourished due to all “the long-term forced feeding and torture.” When the warden and prison chief visited her at the prison hospital, she told them, “I didn’t commit any crime and should be released unconditionally.”

After spending six months at the hospital, Li was incarcerated yet again. Despite her condition, the captain didn’t budge in instructing Fan to torture Li all over again. With this, Li suffered from hallucinations.

During this period of time, Li fell off the bunk bed and became completely immobile.

“When I wanted to go to the restroom, they [inmates] had to pull and carry me as I couldn’t walk. The pulling fractured my femoral head,” she said. “I was once again taken to the hospital and told that I had to have surgery or my femoral head would decay.”

This time, Li remained in the hospital for 40 days before being taken back to prison. During this period, despite all the abuse she had suffered, Li says she didn’t resent nor hate those who treated her badly. Rather, she held strong to her moral integrity and faith.

“In my heart, I had always felt that those who persecuted me were very pitiful,” she said, adding that her upright faith bestowed her with the selfless kindness that changed some stubborn inmates, who later apologized to her and helped her secretly.

During the latter days of her time in prison, Li’s health deteriorated to such a point that anyone who saw her knew that she was approaching her final days. However, she recalls that she was “very alert and had a very strong faith.”

“I told myself that I wouldn’t die,” she said.

Though Li was released after the four-year incarceration, the harassment never ended.

During the ongoing nationwide “zero-out” campaign—which is aimed to pressure Falun Gong adherents to give up their faith—Li faced continuous harassment in late 2019 and 2020 and was pressured to write a “guarantee statement” to renounce her faith, which she refused to do.