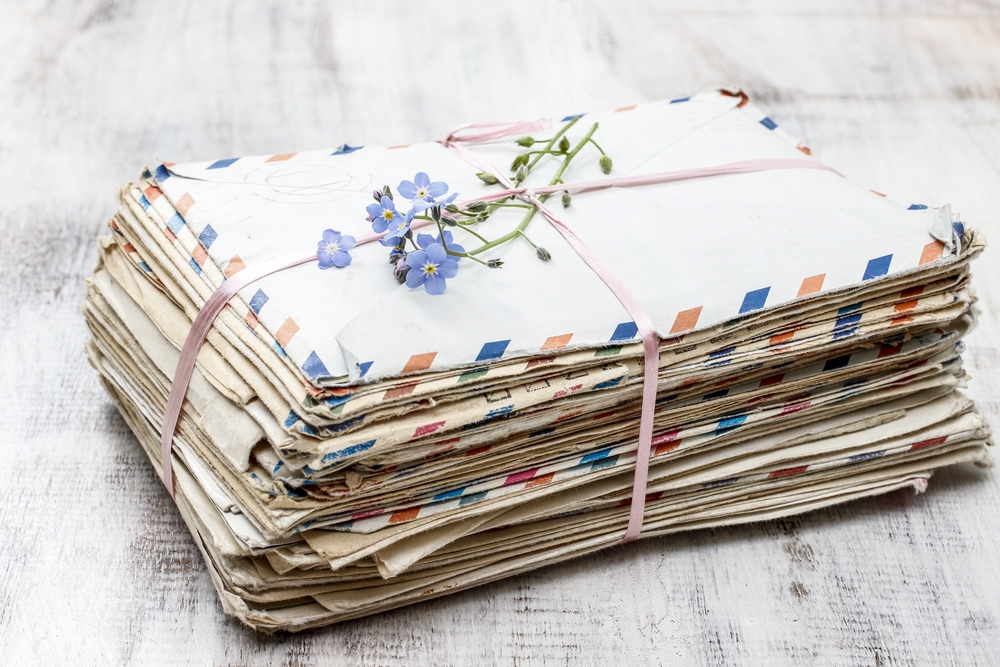 If you keep old letters, you are giving a gift to historians of the future. (Shutterstock)
Books

I like to read other people’s mail. Don’t worry, I only read the mail of dead people. Mainly dead people whose books I’ve read. Let me explain: I like to read published letters of my favorite authors.

I’m currently dipping into two volumes of selected letters: Willa Cather’s to virtually everyone she corresponded with in her whole life (“The Selected Letters of Willa Cather”) and those between Mark Twain and his good friend, author William D. Howells (“Selected Mark Twain–Howells Letters 1872–1910”).

The first I sought on purpose to become better acquainted with Miss Cather while reading one of her books; the latter I came by accidentally at a library sale.

Getting to Really Know Them

After spending time with them, imbibing their imagination through their fiction, I often long to know authors themselves. Biographies are a great way to learn some of the facts of their lives, but letters really allow one to get to know them. Biographies, after all, will nearly always betray the bias and interpretation of the biographer. Letters are the raw material, the real deal—unintentional autobiographical entries.

Some books just make one wonder: What kind of person could write a story like that? Flannery O’Connor comes to mind in this category, and I suggest that one simply cannot grasp the fullness of her weird stories without knowing the very un-weird woman who wrote them. J.R.R. Tolkien is another case in point.

There are other authors of whom we can’t get enough. When we run out of their books but wish we could spend more time with them, where do we go? To everything else they wrote! Oh, why did Jane Austen not continue writing delightful stories for us instead of dying at age 41? It couldn’t be helped, I suppose, and she did write letters, so those will have to do.

They do very well, in fact. I may sit in her parlor and go on holiday with her and hear her complaints and opinions. She becomes my virtual friend by virtue of knowing her more intimately through her letters.

Not only do I come to think of these long-dead and long-admired writers as my friends, but I have met many of their friends, as well. Imagine my delight on learning that two authors whose works I have enjoyed were friends with each other. Willa Cather and Sigrid Undset met through the publisher Alfred Knopf while Undset took refuge in America during World War II. They even shared an interest in flowering plants and exchanged specimens with one another to add to each other’s gardens. It was their friendship that compelled me to seek Cather’s “Selected Letters” during my phase of Undset fervor.

Willa Cather introduced me (through her letters) to a friend from her college years, Dorothy Canfield. While they may have had a falling out, I have gotten to know Canfield through reading some of her works, including “Understood Betsy,” “Self-Reliance,” and “The Home Maker.” I also share her interest in the work of Italian educator Maria Montessori, which she made known in America after her travels through Europe.

While becoming better acquainted with Mark Twain, I have enjoyed meeting William Howells by way of their correspondence. I have discovered that among Howells’s notable friends and colleagues are Oliver Wendell Holmes, Nathaniel Hawthorne, Ralph Waldo Emerson, and even Abraham Lincoln. History and literature surpass the notion of mere academic subjects when we come see these folks as regular people living their lives in an interconnected way. Just as we do.

Networking has never been easier! Meeting crowds of dead people through their letters collapses the obstacles of both space and time.

Dinner Parties I Would Love to Have Attended

As enjoyable as it is to read Twain’s clever published works, it is pure delight to see that his wit and warmth were not just a studied facade, but were the reciprocal delight of his witty and warm friends in real life.

Twain himself wished he could bridge the gap of distance between him and good friends. When the house next-door was for sale, he wrote to Howells, in an 1874 letter, “You or Aldrich or both of you must come to Hartford to live. … You can do your work just as well here as in Cambridge, can’t you? Come, will one of you boys buy that house? Now say yes.”

I’d have said yes, if asked! What fun it must have been to attend a dinner party at the Clemenses’ home. (Mark Twain’s real surname was Clemens.) Upon his return from a European trip five years later, Twain was clearly impatient to see his friend. When he had no word from him a mere five days after his vessel docked, Twain sent this letter to Mr. Howells:

Are you dead – or only sleepeth?

We are all well, & send love to you & yours by the hand of

It elicited an immediate reply from Howells, eager to meet. What a happy meeting it must have been!

It’s remarkable to me that so many letters from so many interesting people from so many years ago have been saved from destruction, treasured, and made available for our present enjoyment. Thankfully, decluttering is a recent phenomenon, following upon the other recent phenomenon of buying too much unimportant stuff. Don’t expect a future volume of “Selected Letters” from the currently popular decluttering superstar Marie Kondo!

When people save letters, it shows a love and respect for the person who wrote them. There may be a stack of old love letters tied with a ribbon in a trunk in your attic. They contain not only the thoughts and sentiments of the sender but also little slices of history. A letter is a bridge to a moment in the past as well as to a person removed from one’s presence. These words were conceived in someone’s mind and formed by that person’s hand on this very paper.

The keepers of these epistles kept a part of the sender in their drawer. For some, the motivation was love—a memento, a relic of the loved one. Perhaps they also knew these would be worth saving from a historical point of view. And, thank goodness.

I worry about our future in this respect. Everyone is “going paperless.” What are future biographers to use for this peek inside the private lives of today’s interesting people? Even if email and text messages could be retrieved, those media don’t really lend themselves to the same kind of warm expression as actual letters.

Ironically, though electronic media affords us unlimited space to put down our thoughts, we employ them for more abbreviated communication than was used in tangible letters on costly paper. Funny, but it doesn’t make me LOL.

In Praise of Paper

Paper used to be a serious commodity. A well-heeled correspondent of earlier days could walk into a stationer’s shop and choose from any number of weights, finishes, and sizes of writing paper.

When I see a shop these days devoted to just one obscure product, I am tempted to think, “Mafia money laundering!” How else in the world does a shop selling only socks stay in business? That wasn’t the case for stationery shops when people routinely wrote letters.

Don’t get me wrong; not all this paper was lovely. There was, even then, cheap and miserable stuff wrung from forests of massacred trees. But the destruction of those trees could be vindicated by the conveyance of wonderful thoughts and sentiments preserved for posterity. A case in point is this letter, from Cather to Elizabeth Shepley Sergeant in 1913. She began, “Dear Elsie, Damn this paper? Yes, but I got a lot by mistake and I have to use it up on people who know the worst of me. As soon as I really care about people, I begin to give ’em my worst—always.”

You see why I love Willa Cather so? I hope she would have used her lousy paper to write to me, had we met. I would surely have written her back on a paper towel, it being the only paper really easy to come by these days, there not being a stationery shop handy anywhere.

When I recently looked for a simple pad of letter-writing paper, even the gargantuan online everything seller yielded no results. Happily, I found a pad at the grocery store! Of course. That is, after all, where I go when I’m picking up what’s needed for entertaining dear friends.