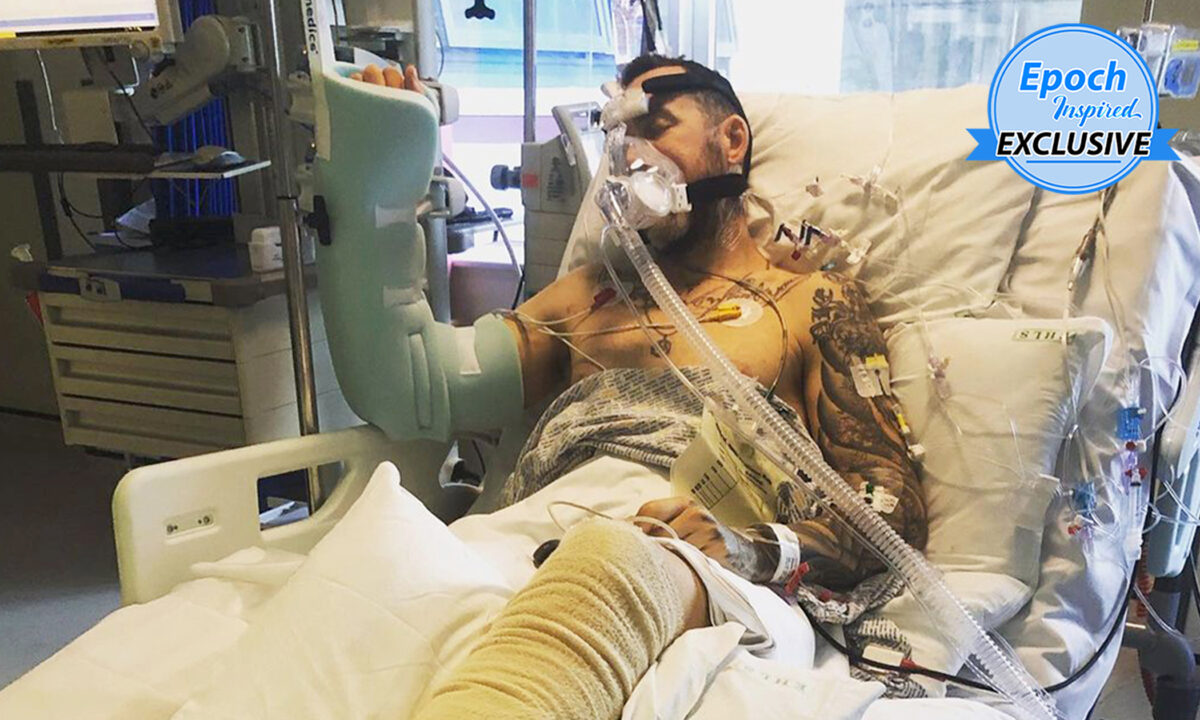 ﻿‘I Felt Nothing but Love’: Cyclist Left for Dead Forgives Driver Who Mowed Him Down

A cyclist in the UK was left with broken legs, a broken arm, a punctured and collapsed right lung, heart trauma, and bowel trauma after he was hit head-on by a drunk driver. Losing all memory of the accident and after spending almost two weeks in the ICU, he shares his amazing journey of recovery and how he made the admirable decision to forgive the driver who left him almost dead on the side of a road.

Jean-Pierre De Villiers (JP), a coach, speaker, and writer, moved from Cape Town, South Africa, to the UK when he was 20. He began coaching at age 25, wanting to make a difference in other people’s lives, and over the decade that followed he had not only become a well-known coach, but he had spoken in 17 countries and written six books. Amid all of his success, his life was moving fast. He knew he needed to slow down.

“I knew before the accident that for me to help and heal more people, I needed to slow myself down. I needed to go from more action to more spirituality, and speaking from a slower pace,” JP told The Epoch Times.

In 2019, JP’s eventual slowdown was unexpected and was caused by a head-on collision, a hit-and-run, near Ilfracombe in Devon. On day 7 of a 10-day bicycle challenge, he and his biking partner—who were both raising money for a brain cancer charity, the Addie Brady Foundation, completing 1,000 miles in 10 days—decided to change routes.

On day 8, before reaching the finish line, JP’s journey was cut short by a drunk driver, who was four times over the legal limit. After slamming into JP, the driver sped off, leaving him on the side of the road for dead.

“So, I was literally put on my back. And now I was forced to slow down,” he said. “I had this accident, where somehow I have no memory of it. It’s almost like God said, I’m going to give you this life-changing experience. But don’t worry, you’re not going to remember it.”

Posttraumatic amnesia hid the memories of the accident from him, leaving him to rely on the accounts of others to understand the accident.

JP was fortunate that the first person who stopped was a paramedic, followed by an off-duty police officer, and then someone from a rescue team, who luckily happened to have a tank of oxygen in their car.

He was airlifted to Derriford Hospital in Plymouth and immediately put in the ICU. It was not until day 10 or 11 in intensive care that he realized what had occurred. His doctor told him it was a miracle that he survived.

Remarkably, of all the attitudes that could pervade his mindset after this incident, JP’s was one of gratitude. He looked at his circumstances and the road before him as opportunities to give, rather than moments of self-pity or blame. He credits his positive attitude to two things: his skills and experience.

Having already experienced adversity in his life, JP was adept at overcoming hardship and difficulty. As a child, he had moved around a lot and was bullied for his differences. His father was an ill man who took his own life and this made JP a bigger target for bullies. Thus, drawing from his past experience, he reminded himself that he had grown through those hard times—and he could stand above new ones.

“All of these things I built up as evidence that I am strong; I can. And this is just another challenge,” he said. “I can get through this again.”

JP was also skilled at thinking like a champion and at viewing adversity as something to be overcome, rather than something threatening one’s life. Then, with confidence firmly footed in his skills and experience, he looked outward.

“I knew that I had the skills to cope with this adversity. And, I felt excited about what I was going to do next. And, even before I left intensive care, I lay in my bed and said, ‘my recovery will not be about me. My recovery will be about everyone that I can share the story with,” he explained.

Seeing his recovery as an opportunity to do what he had originally set out to do—help others through their own challenges in life—JP embarked on a new journey.

At first, his physical recovery was extremely limited.

“I knew that when I was in recovery for several weeks in hospital, physically there was not a lot that I could do,” JP said. “I could barely move my body onto my side.”

Unable to work on his body, he still did not see himself as a victim. Instead, he turned his attention to what he could work on: his mind.

“A big thing for me was never to blame the driver,” JP shared.

JP said that blaming others for things in life, such as “our husband, our partner, the driver,” results only in loss. “We give our own power away,” he said. “And when we give our power away to someone else through blame, we remain powerless.”

In refusing to bestow blame, there were four specific aspects that helped him mentally, JP shared.

First, was personal responsibility. He never allowed himself to feel like a victim. Second, he surrounded himself with the right people in recovery. Supported primarily by his wife, he also kept himself near those who would propel him forward.

Third, he said that he found “meaning” along his journey, choosing to perceive that his recovery could be utilized for the benefit of others.

About two weeks after the accident, in a recovery hospital, he said, “let me try and move my ankle one inch from the bed.” And that was his focus for the day.

He lifted his ankle five times that day, and then he celebrated. Soon, he was being lifted to stand. What he “could do” expanded and his milestones continued.

Over the tidal rise and fall of good and bad days through JP’s recovery, he began to make progress. And when he saw it, he highlighted it; he shined big glaring spotlights on it.

Every mark of progress for JP resulted in a “flood of gratitude”—whether it was the first time sitting up, standing up, walking on crutches, or going down stairs. A year and a half after his accident, he ran for the first time.

“When I feel like something is happening that allows me to acknowledge that, ‘hey, I’m better than I used to be,’ I just feel very grateful.”

However, his journey to recovery was not always smooth, and there were challenging days too.

JP said he addresses hard days by relying on habits, which he calls “sacred rituals”—the things that help him to be his best every day; the practices he maintained on the good days, and that he clings to when the days are a little darker.

For him, these things are gratitude, meditation, keeping a journal, and daily movement; all helping him pull through, even today when the days are tough.

One and a half years after his accident, JP had the opportunity to attend the sentencing of the drunk driver who had mowed him down. He knew he needed to go and he would have the opportunity to give a “victim statement.” So, he went to the courtroom.

“When I saw him, I felt nothing but love and I felt sorry for him; I felt empathy,” JP said. “I didn’t want an old man who clearly had a drinking problem and a life problem to go to jail.”

In his statement, JP publicly forgave the driver. Rather than an accusation, pity, or anger, he told the man: “I need you to know that I have no ill feelings toward you. I don’t feel negatively toward you. I love you.”

What followed stunned the courtroom. After JP’s public demonstration of forgiveness, the driver stepped out of the defendant’s box and put his hand to his heart. He and JP then shared a meaningful conversation right in the middle of the courtroom, where apologies and “beautiful words” were exchanged. The two left each other at peace. The interaction so touched the onlookers that the defendant’s lawyer even commented, saying he had never seen anything like that in his 25 years of practice.

While facing and forgiving the man had helped JP to heal, he didn’t feel that offering forgiveness is for him alone.

Two years after his accident, JP went out to cycle again, finishing what he started.  He had recovered beyond expectations. Still, having been forced to leave the charity challenge unfinished, he felt an unclosed loop still lingering.

He then returned to the site of his accident where some people showed him where he and his bicycle had been smashed to pieces. Contrary to what he had expected to feel on returning to the site that changed his life, he felt peace, crediting it to all the work he had put into himself.  Then, the following morning, JP got back on his bike and finished the challenge that had been left undone so long ago.

“I went one kilometer back so that I could drive past where I got hit by the car and I did it with grace and beauty, with gratitude, with a smile, JP said. “I just said, ‘let’s go and let’s finish this.’ And I just did it with a backpack and my bike.”

This not only gave JP closure in his own heart, but he said that sharing this “beautiful experience” online has also inspired others to finish their own uncompleted goals.

Today, he sees himself as a very different person. According to JP, even his wife finds that she is married to a different man.

Some of the changes include the following: he doesn’t procrastinate as much as he used to; he is looking for additional challenges to overcome; he has spent time in pursuit of greater understanding and self-development; and now, believing there is a true purpose to his life, JP feels he has work to do.

“I’m going to live fully, without any fear,” he said.

Reflecting back on the entire ordeal and the lessons learned, he said that he wants to pass the message to others that they, too, can overcome traumas, challenges, and adversities—that it is possible to cross your own finish line.