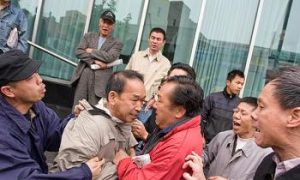 ‘I am just thrilled that Shen Yun came here!’

Visibly moved, tears kept welling up in Ms. Betts eyes as she spoke. “I absolutely loved it. The music is gorgeous. I think it’s a gorgeous fusion of those sounds. I don’t know how they did that but it’s absolutely beautiful. The dance is… I keep crying. My eyes are tearing up; it’s beautiful!”

A performance by Shen Yun Performing Arts is a presentation of Chinese culture as it once was: a study in grace, wisdom, and the virtues distilled from the five millenia of Chinese civilization.

Ms. Betts explained that New York-based Shen Yun resonated with her deeply, “I think it’s the culture: to be able to have that connection and see the struggles. The little story about the Chinese struggle, it just brings tears to my eyes. To know that China’s culture is 5,000 years old, we’re like little babies here.

Accompanying Ms. Betts was her granddaughter, “I brought my granddaughter here, so I was just very, very happy to see the little story about Pigsy and the Monkey King [The Monkey King Outwits Pigsy]. The story about the children in school and [how] the teacher was roughed up [Our Story]. [The teacher] was teaching that generation that you believe in something, and they were so moved by their teacher . . . and then lifting her up, it was just heart-warming.

Ms. Betts said certain aspects of the show would always remain with her, “To believe in your heart, and if your heart tells you that something good is happening, people who come along and want to control you, say no to that. Just believe in your heart and it will all work out. I think that human beings know that instinctively without being told.

She felt the performances were universal and said, “I think that they can see that through the music and dance and the spirit that it brings to a person. It brings tears to my eyes.”