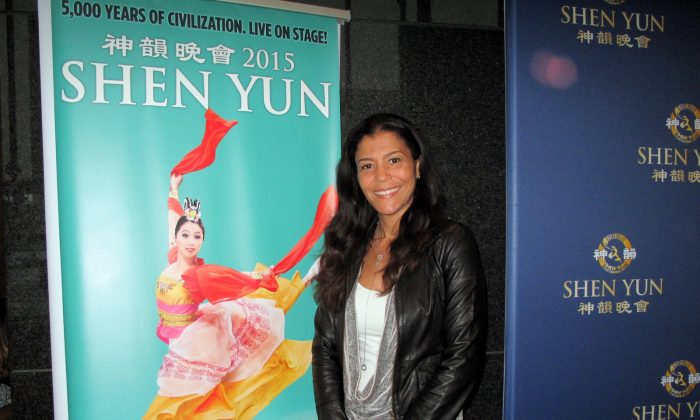 Ms. Santiago has guest-starred on numerous television series, such as “NCIS,” “CSI,” and “The Young and the Restless.” She also stars in the films “Daddy Day Care” and the upcoming “Fast and the Furious 7.” She attended Shen Yun on Saturday, Feb. 7, at the Terrace Theater.

“I found myself in tears a couple of times,” said Ms. Santiago. “It was a beautiful, beautiful performance.”

Ms. Santiago said she learned quite a bit about classical Chinese dance and the true, divinely inspired culture of China that was once almost lost. Shen Yun’s mission is to revive this culture and its principles and values.

She urged others who have not yet seen Shen Yun to attend, saying, “Hurry! Don’t miss it!”

Ms. Dodson said the Shen Yun performance was very unusual and exotic to her, but beautiful. She thought the dances were very expressive, and she enjoyed the costumes and the stories. She said the gorgeous background scenery made her want to go to China.

Ms. Dodson was also touched by the solo performance of the erhu, a two-stringed Chinese instrument. “It was amazing what she could do with that,” she said of the artist. “That was beautiful.”

“Since ancient times, China has been known as the ‘Celestial Empire,'” states the Shen Yun website. “This refers not only to China’s strength and position as East Asia’s Middle Kingdom, it also captures a more profound meaning, describing a land where the divine and mortal once coexisted. It refers to the belief that the divine, through various dynasties, transmitted a rich and abundant culture to the Chinese people.”

Ms. Dodson said she came to see Shen Yun because she had heard someone say that the performance was one of the most spiritual experiences they’d had in their life. She said it had sounded like something she’d like to see, and now she agrees that it is a touching spiritual experience.

She commented on one dance piece that showed people being concerned about and showing compassion to those who attack them, and she said that was wonderful.

“I hope that everyone has a chance to see it,” said Ms. Dodson. “If you didn’t come this year, come next year.”

‘Beautiful message behind it’

A group of six sisters were also in Shen Yun’s audience on Saturday.

“Very inspirational and very divine,” said Norma Nunez, a secretary. “I got very emotional when we first walked in because it reminded me of my mother. My mother passed away … and my mom was very religious. She would love this if she were here today.”

“It was very touching,” said her sister Evangelina Rodriguez, a visual artist. “Beautiful message behind it.”

Ms. Nunez said she felt Shen Yun sent a message that everyone should love one another and be kind to one another, and she said all the artists did an outstanding job.

As an artist, Ms. Rodriguez loved the colors and visual effects, and she was deeply touched by the spiritual elements of the performance.

“The message was that heaven and the earth were connected, and that’s what touched my heart, because we are. One day we’re going to go to that place. We’re going to have peace in our lives, because we have so much corruption now,” she said. “So this gave me peace of mind.”

She said she was happy to hear that every year Shen Yun produces an all-new program, and she said she would see it again.