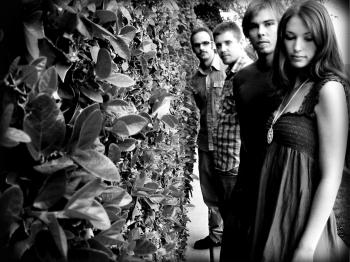 Hunter’s Point is a musical blend of piano based pop songs with jazz and blues influences. Their unique sound is born out of hypnotic melodies. The strong stance made by the rhythm section along with a technical guitarist gives the female vocals a solid and inventive presentation.

Though the band’s lineup has changed over the year, most of the music on the album is the result of four musicians from L.A. Music Academy. Their new album delivers soft piano ballads and solid jams.

I recently had a chance to talk to the band about their creative process and inspiration.

In explaining where the name Hunter’s Point comes from, drummer Mike Hughes explained, “Hunter’s Point is actually a bad area in San Francisco. We thought the name was a joke at first but it stuck and now it’s our name.”

Front-woman Tahkus Ekedal commented on the album, saying, “I think that all of the songs are honest and we all approached this with a lot of honesty … I hope the listeners get their own interpretations of the lyrics and the feelings in the songs.” In describing the group’s creative process, she said, “The fundamental parts of the songs are developed by me and Jackson and Mike is a great musician. The songs morph as we rehearse them.”

Bassist Peter Boskovich added “The primary song writers are Tahkus and Jackson and they bring the songs to me and Mike who interpret them and turn them into complete songs.”

Guitarist Jackson Allen said “We pretty much collaborate on the songs. Usually the music comes first and then the lyrics are added. As lyrics are put on we start getting more of idea of how the song should be.”

Hunter’s Point’s first album is a mix of piano ballads and more up beat songs, accentuated with soothing vocals and  that deliver them. There is a pure sound on the album and it is apparent these songs were born out of artistic merit.

For a free sample of Hunter’s Point check out their site www.hunterspointband.com or pick up the band’s self-titled debut on iTunes or CD Baby.

The group will be embarking on a West Coast Tour that starts in October. Their next live performance will be September eighteenth at Dipiazza’s in Long Beach California.