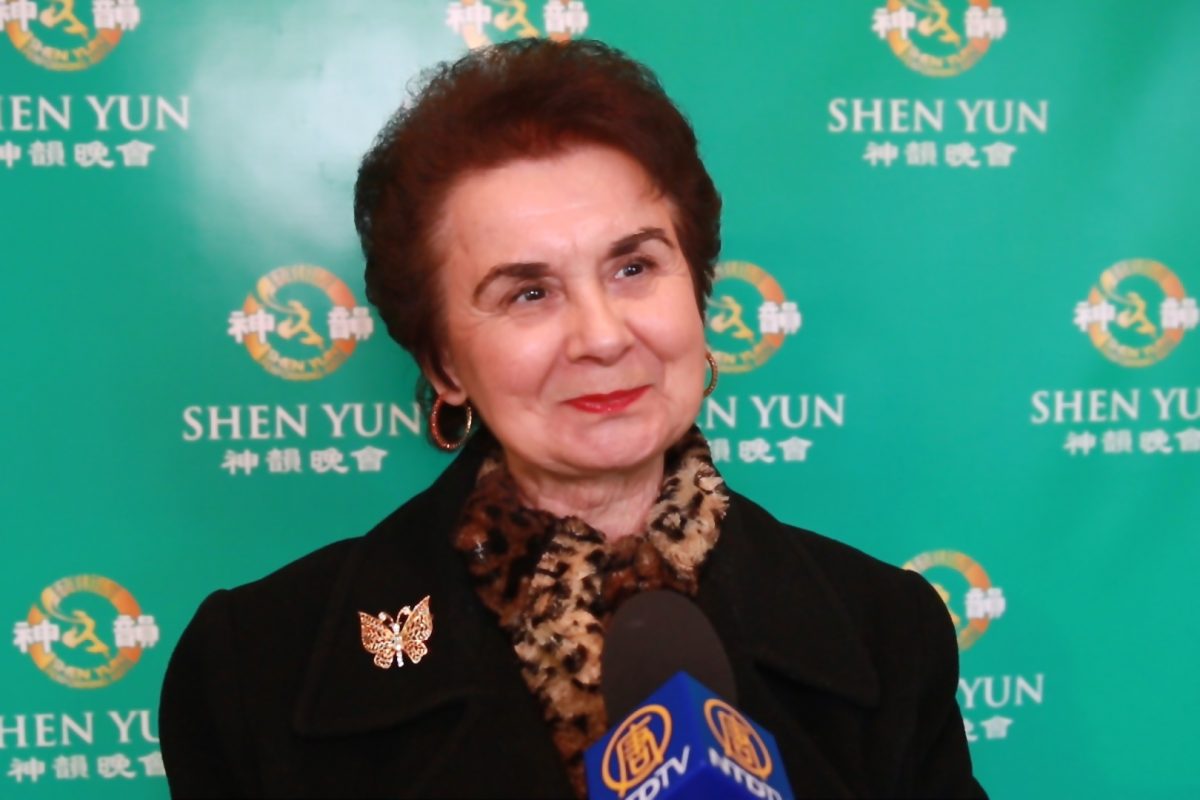 GRAND RAPIDS, Mich.—”It moves me very much. You feel closer to God, the Creator, as you call it, but I call it God,” said Julia Nagy, president of the Hungarian Club and a retired nurse. She commented after experiencing Shen Yun Performing Arts for the second year at Devos Performance Hall on Feb. 15.

“I loved it last year. It was so beautiful, and what I love about it, too, is the faith that [they] bring out, about the Creator … You feel the spirituality. That’s what I loved.” Ms. Nagy continued.

Shen Yun’s website brings the reader deeper insights into the company: “Throughout history almost every culture looked toward the divine for inspiration. Art was meant to uplift, bringing joy to both the people who created and experienced it. It is this principle that drives Shen Yun performers and their art.”

“What I feel with this show is that no matter what your religion is—that you can relate to that. We have to become compassionate to people. We have to have hope—all of that is involved in what [they]are presenting, and it doesn’t matter what your religion is because we all have the same idea of the Creator, the spirit, and we all plan to go to heaven someday. That’s what I get out of it,” she said.

“It makes me feel more spiritual. It creates a feeling of spirituality and beauty and love and understanding (for) more people,” she added.

Continuing she said, “If we have faith and we have love and hope, and we believe in the Creator, that we will all come out on top. The world is so lost today, and we need more of that.”

The richness of the performance is rooted in the noble tradition of looking to the divine for inspiration.

Shen Yun’s website clarifies:”For them, this spiritual connection is motivation for striving to excel, is the heart behind each movement of the dancer and each note of the musician. It is why audiences can feel there is something different about Shen Yun. Their source of inspiration, rooted in traditional Chinese culture, is the spiritual discipline known as Falun Dafa.”

Having lived in Hungary under the atheistic communist government, Ms. Nagy genuinely values freedom of religion, and spiritual principles.

She relates “to the Chinese people’s pain of being imprisoned by communism.”

“Shen Yun cannot be seen in China today, where traditional culture has been nearly lost,” says the website.

She loved the beauty of what Shen Yun does, and “also I feel a relationship with the people’s pain in China,” she said.

“There’s less …spirituality today, and I think a show like this—may draw people to the Creator maybe, hopefully, besides seeing all this beauty around you, which also relates. Anything that’s beautiful, I also relate to God, the Creator,” she added.

“The whole thing, [is] a beautiful performance—the colors. The colors are magnificent, and I feel kind of a kinship with the people who suffer under communism, and … the faith that is so deep.”

“We all believe in that,” Ms. Nagy added in closing.