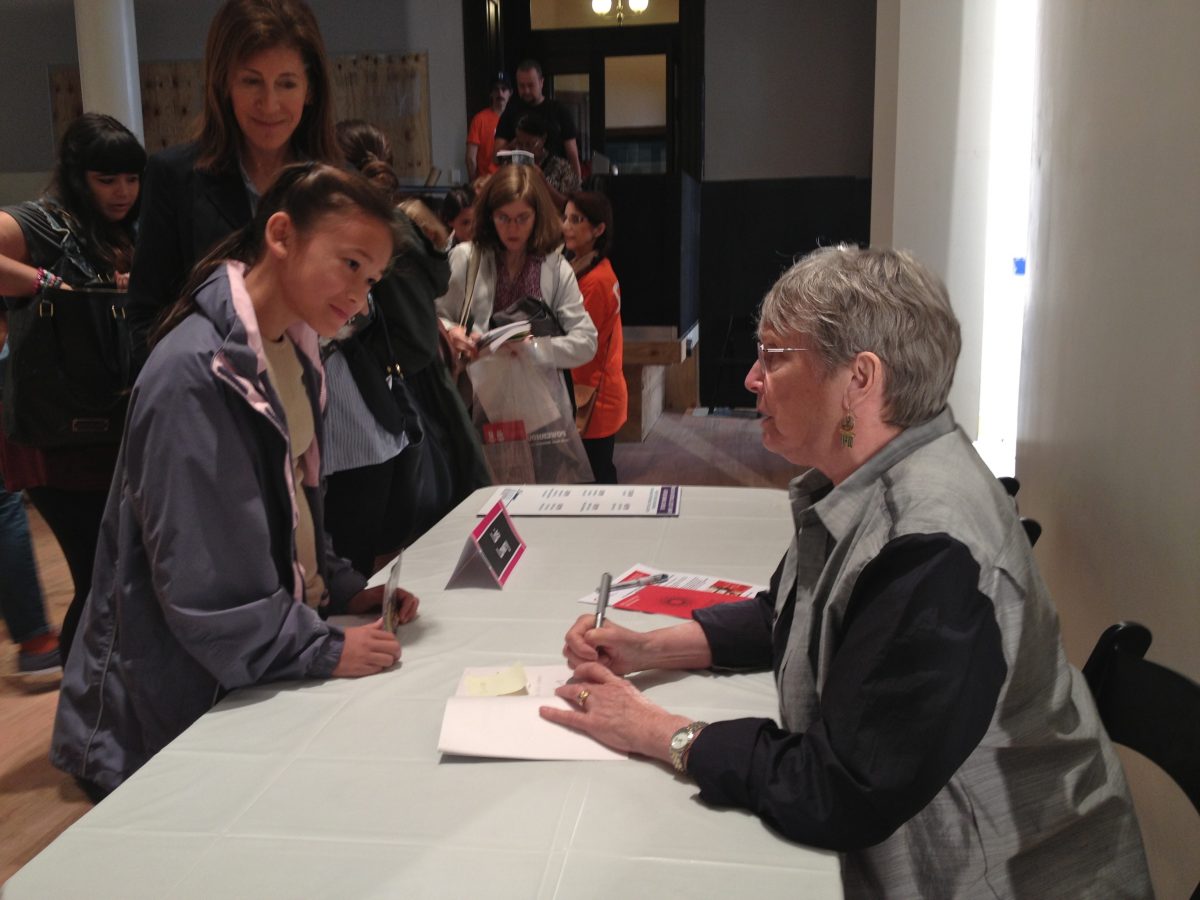 NEW YORK—To become a successful author you don’t just need luck, you also have to be persistent, original, and cope with being alone for long stretches of time. These are a few tips that award-winning author, Lois Lowry; recently published author, Ursula DeYoung; and Akashic Books publisher, John Temple shared at the Brooklyn Book Festival on Sunday.

Lois Lowry, who went to school in Brooklyn, now lives in Massachusetts and spends some time in Maine. She has written over 40 books and has won two Newbery Medal awards for her work.

According to Lowry, geography has nothing to do with becoming a successful author. “All the connections in the world are meaningless if you don’t do the work,” she said.

Lowry said that getting a book published is more difficult than before because many prominent publishing houses have merged. “You used to be able to submit your work to this publisher, and if they rejected you, you were able to submit to this [other] one,” she said.

Although there are some new benefits for emerging authors, like self-publishing, that process requires them to do their own marketing and that is difficult according to Lowry.

To become a successful writer, “it takes a lot of hard work,” she said.

One of Lowry’s novels, The Giver, is being made into a film in South Africa, staring Alexander Skarsgård, Meryl Streep and Jeff Bridges. The screenplay adaptation is by Vadim Perelman.

The sci-fi drama is set in a utopian community where a young boy learns about the truths of the world from an older man called “The Giver.”

Something Lowry says to her kids who want to be writers is that they need to be willing to be alone for long periods of time, usually by sitting alone in a room all day, every day.

Although Lowry faced challenges early on in her career, trying to balance her work with the demands of raising her four children, she stuck to writing because of her love of literature.

“Reading is what kept me motivated,” Lowry said. She reads a lot of non-fiction and biographies and memoirs.

Ursula DeYoung, a young author who was introducing her first novel at the Brooklyn Book Festival, agreed that to become a good writer it’s important to read a lot. She said, the process of getting published could be lengthy.

DeYoung was one of the five emerging authors who read an excerpt from her first-published novel, Shorecliff, a family drama that takes place after the first world war at a mansion in Maine. The 30-year-old author signed books at Borough Hall and talked about the ten-year-long process of getting her novel published.

“It’s very lucky at all to get into the industry,” she said. DeYoung has an extensive background in history studies having completed her Bachelor’s at Harvard and her Master’s and PhD at Oxford University.

DeYoung said that although her strong educational background helped her with doing research when writing historical novels, at the end of the day it’s about “Luck, talent and being able to write,” she said. But the most important factor of becoming a good writer is that, “you have to read a lot,” she said.

For the ten years of sending out her manuscript to different agents, she encouraged emerging authors not to be afraid of the lengthy process.

“Don’t worry if 50 people say no, because all you need is one yes,” she said. She said looking for agents is a process that doesn’t cost anything, so it’s good to stay determined.

Although DeYoung has always wanted to get published, she said that before she got published it was just a distant dream.

“I never though I would be able to make a living out of writing, because it’s such a long shot,” she said.

DeYoung is now working on another historic novel set before the first world war, a time period she enjoys writing about.

“We’re trying to publish to fill a void,” he said about picking up books that weren’t accepted by other publishing houses. Akashic Books publishes a lot of writers from the Caribbean, in its goal to expand the audience base for new writers.

Temple says that small publishing houses have been on the rise, making the publishing landscape more vibrant. According to Temple, Akashic Books is successful because they’re not pressured, like the big companies, to publish books that have big commercial appeal.

“It’s all about trying to make books and literature accessible to people,” he said.

Temple also calls himself the catalyst of the festival. After he moved to Brooklyn from Washington, DC, he’s noticed that independent authors need more exposure. He worked with Borough President, Marty Markowitz on establishing the Brooklyn Book Festival.

“Look at all these people hungry for books,” he said about the event. Hundreds of visitors roamed the streets that were peppered with white and blue tents where publishing houses and bookstores sold and promoted books.

“You can’t beat this in terms of a place to network,” he said about the value of the event for emerging writers.

The Brooklyn Book Festival attracts thousands of visitors each year and is the biggest free book festival in New York. Over 350 authors, new, old, and international attended the event on Sunday.