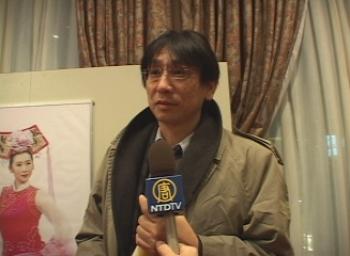 Shinichi Tokunaga, an attorney of the legal team of Global Lawsuit Against Jiang Zemin. (Courtesy of NTDTV)
Arts & Culture

From 2002 to 2007, Falun Gong practitioners have filed more than 50 criminal and civil lawsuits against Jiang in more than 30 cities and regions. Jiang is charged with genocide, torture, and crimes against humanity. The number of cases against Jiang is constitutes the largest international human rights lawsuits in the 21st century. It is also a joint legal action involving attorneys from the largest number of distinct nations worldwide since World War II.

Mr. Tokunaga is the plaintiff's lawyer for this case in Japan. Japan became the 15th country to file lawsuit against Jiang.

Upon watching the show, Mr. Tokunaga said, “Good programs come one after another. The two and half hours just slipped away so quickly. I can feel that the performance conveys China’s traditional moral values. That’s the same as last year’s DPA performance. In China’s long history and ethnic culture, I can sense mankind’s traditions and Asian people’s feelings. I felt it, just like the Chinese people would.

“This is a very wonderful performance. It unveils tradition, unfolds truth—the world’s truth, the universe’s truth, and the truth that’s covered by politics. These [truths] are conveyed through arts; it is easy to understand and goes straight into the heart. Through bringing people to back to traditions, we can rethink the present. In this way, all the truths became clear. It’s very interesting.”