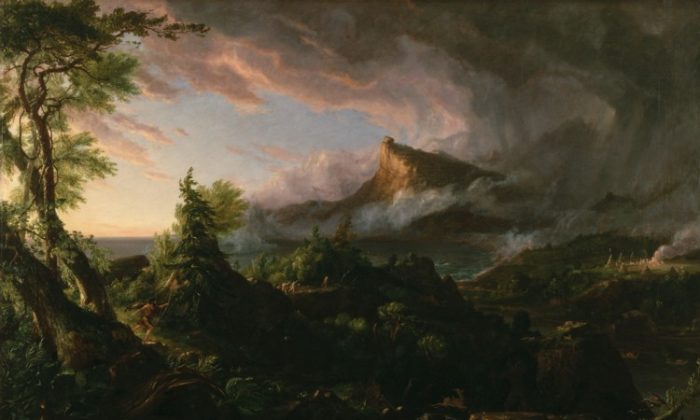 NEW YORK—Amidst the quietude of the New York Historical Society’s second floor, gasps of “extraordinary!” and “amazing!” can be regularly heard. Visitors delight at the sublime landscapes captured realistically in oil paint by the Hudson River School artists of the 19th century.

The exhibit, on now through Feb. 21, is understated in its presentation, consisting of one large and open rectangular room lined with some of the greatest works from this loose association of artists. No grand marquee reads: “This is the Hudson River School; bow down in respect,” but perhaps there should be one.

Before movies, television, and even photography, these paintings played a huge role in giving people a sense of creative fulfillment.

As one Hudson River School artist Asher B. Durand put it, a 19th century man who owned a landscape painting could sit down after a long day of work and mentally walk into the painting, finding “pleasant reminiscences and grateful emotions will spring up at every step, and care and anxiety will retire far behind him.”

In one case, painter John Trumbull decided to create a large circular panoramic view of Niagara Falls, which he planned to take to London and sell tickets for. The venture fell apart, but the long thin paintings remain. The story, among others, is recorded in an excellent book on the Hudson River School by Linda S. Ferber of the Society.

The centerpiece of the exhibit is a five-paintings series by Hudson River School figurehead Thomas Cole that tells the epic story of the rise and brutal decline of an ancient empire. Each painting giving us glimpses across the millennia from roughly the same vantage point with a single boulder on a mountain in the background remaining the same.

It wasn’t just relaxation and entertainment value, but also a spiritual experience.

“The carefully observed details … embodied the artist’s belief that unmediated contemplation of unspoiled nature offered opportunities for spiritual reflection and renewal,” according to Ferber.

Of course, who needs all that when you have, say, the sweeping landscapes of the “Lord of the Rings” movies? Therein lies the real magic of the Hudson River School. While movies might feel greater, after leaving the exhibit you might wonder if they really are greater. Is art today going forward or backward?

The Hudson River School paintings created fulfillment at a fraction of the cost (even when adjusted for inflation) and with no residual neglect of the environment. Quite the opposite, they inspired people to value the environment.

In his famous quote, Cole exhorts: “[American scenery] is a subject that to every American ought to be of surpassing interest; for, whether he beholds the Hudson mingling waters with the Atlantic—explores the central wilds of this vast continent, or stands on the margin of the distant Oregon, he is still in the midst of American scenery—it is his own land; its beauty, its magnificence, its sublimity—all are his; and how undeserving of such a birthright, if he can turn towards it an unobserving eye, an unaffected heart!”

At a time when so much of our environment has been subjugated to civilization and ruined by pollution, Cole’s words are perhaps more relevant than ever.

The school’s paintings not only resonated beauty, but also enshrined the highest level of technical discipline as one of their main themes.

In training aspiring painters, Durand said, “Proceed then, choosing the more simple foreground objects—a fragment of rock or trunk of a tree … paint and repaint until you are sure the work represents the model—not that it merely resembles it.”

If we had television programs with main themes like that, we’d be telling our children to watch more of it, not less.