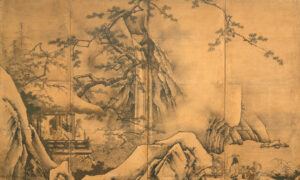 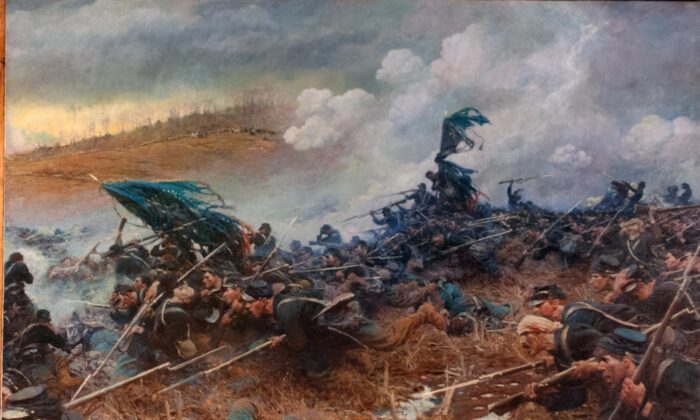 The Story of Art: What we can learn from the lives of artists
By Eric Bess

I’ve taught in college for over a decade now, and I often wonder what makes a good teacher? I often conclude that moral character is a teacher’s most important quality.

With that said, good teachers don’t force their understanding of morality on their students. Instead, I believe a good teacher inspires students to think empathetically but critically. Good teachers give of themselves for the benefit of the subjects they teach. With these qualities, anyone can be a teacher by way of example.

The 19th-century illustrator Howard Pyle—often considered the father of American illustration—may provide us with an example of a good teacher.

We will introduce Howard Pyle’s life as an artist, illustrator, and teacher by way of Lucien L. Agosta’s book “Howard Pyle.”

Pyle was born in 1853 in Delaware to Quakers. His mother had significant influence on his later artistic career, as she had unfulfilled artistic and literary goals herself and exposed her children to as many pictures and children’s stories as she could.

Pyle did not do well at school; above all else, he preferred to draw and hear stories. He learned more at home, reading through his mother’s collection of children’s books. By the age of 16, Pyle’s parents took him out of school and had him privately tutored to prepare him for college. Pyle, however, did not do well with these studies either. Finally, his parents had him learn from an academic painter and teacher named Francis Van der Weilen. This experience would be Pyle’s only formal training in art.

Around the age of 23, he began to send short verses and illustrations for publication to New York. To his surprise, his submissions were accepted, and he was paid for his illustrations. He thought he might have a successful illustration career.

While traveling to New York on business, Pyle’s father stopped at the offices of Scribner’s Monthly on behalf of his son. Because of this meeting, Scribner’s Monthly offered Pyle a job in New York City, which he accepted. After moving to New York, however, Pyle had several artistic setbacks. Initially, he was not as successful as he thought he’d be. He became insecure about his artistic ability. But he refused to give up and decided to enter the New York Art Students League to improve his drawing skills.

In 1876, he went to work for Harper and Brothers, in New York, but it wasn’t until late 1877, after meeting Charles Parsons, the art director at the company, that Pyle would catch his big break. Pyle requested that Parsons allow him to finish a complete illustration for publication instead of handing it over to one of the more experienced illustrators.

Parsons reluctantly agreed, and Pyle spent six weeks developing his illustration. Not only was his illustration accepted, but it also was a double-page layout in Harper’s Weekly. This event would be the turning point in his career.

Through hard work and endurance, Pyle finally became a successful illustrator and one of the most sought-after illustrators in New York.

He produced hundreds of illustrations for Parsons and began writing and illustrating children’s books like those his mother exposed him to when he was young. Between “1883 and 1888 Pyle published six books, four of them enduring masterpieces for children,” Agosta says.

Pyle also gathered the respect and admiration of U.S. presidents Woodrow Wilson and Theodore Roosevelt with his illustrations of American history.

It wasn’t until 1894 that Pyle decided to teach. By this time, he was at the forefront of what would become the Golden Age of American Illustration.

“In deciding to teach, Pyle wished to do more than merely share with younger artists the skills he had so painstakingly acquired. Ever zealous to raise the standards of American Illustration … he crusaded for a native art characterized by American methods used to depict American subjects,” Agosta says.

Pyle taught according to two principles: mental projection and original composition. Mental projection consisted of “the ability to thrust the self imaginatively into the scene being depicted.”

Original composition was one of his most important teaching tools. He encouraged students to compose pictures in whichever way would allow their artistic intentions to be expressed freshly and powerfully to the viewer.

The Teacher Who Gives

Pyle first offered to teach at the Pennsylvania Academy of Fine Arts in Philadelphia, but the institution turned him down, citing that it was a school of fine arts and not of illustration. Pyle instead began to teach at the Drexel Institute of Art, Science, and Industry.

He excelled so much as a teacher that the Drexel administration decided to expand his classes into a School of Illustration—the first school of its kind—under his direction. It wasn’t long before Pyle was overwhelmed by the many students who needed basic instruction.

Frustrated by a lack of commitment from many students, Pyle, according to Jeff A. Menges, requested from the Drexel administration a summer class for which he would carefully choose students who would do the best with his methods. He also offered to teach these classes for free.

The Drexel administration agreed, and Pyle was able to implement his teaching methodology quickly. He reported that his students improved more from two months of summer study than they had in a year of regular training.

After six years of teaching, Pyle decided to resign from Drexel and open his own art school—the Howard Pyle School of Art. He would accept about 200 students throughout his teaching career and never charged them any money. Instead, he lived off of what he made from his illustrations.

Through his teaching with a generous spirit, Pyle would deeply inspire some of the greatest American illustrators of the 20th century, including Maxfield Parrish, Jessie Wilcox Smith, and N.C. Wyeth.

According to Agosta, several of Pyle’s students had nothing but praise for their teacher. Maxfield Parrish had this to say about him:

“It was not so much the actual things he taught us as contacts with his personality that really counted. Somehow, after a talk with him, you felt inspired to go out and do great things, and wondered by what magic he did it.”

“Wyeth … wrote of Pyle’s ability to make his pupils see life and art in a new way … Wyeth described his first composition lecture from Pyle as having ‘opened my eyes more than any talk I ever heard.’”

Pyle’s love of art fascinates me. He was willing to teach for free students who were ready to commit themselves to a life of illustrating.

According to his teaching methods and how he lived his life, I believe that a life devoted to illustration requires certain character traits.

First, an illustrator has to be imaginative. By imagination, I don’t think Pyle meant altering reality for the sake of being quirky or original. Instead, he said, “My friends tell me … that my pictures look as though I had lived in that time.” And he told his students, “Project your mind into the subject until you actually live in it … Throw your heart into the picture and then jump in after it.”

To me, this lesson in illustrating is also a lesson of empathy. It asks the students to step outside of themselves and consider what somewhere or someone else looks like, feels like, thinks like, and so on.

Second, the illustrator has to effectively communicate empathy by way of the composition. Illustrators must again step outside of themselves to consider how the viewer will best experience and understand the illustration. Thus, the illustrator practices empathy twice over with each new work.

Thirdly, illustrators give of themselves, not only their images but also some of the most precious things they own: their time and their efforts.

In other words, the illustrator must constantly consider others.

How might we imagine other places and times as a practice of empathy? How might we be more empathetic in the ways we communicate with the people around us? And how might we use our time and our efforts to uplift and encourage those around us?