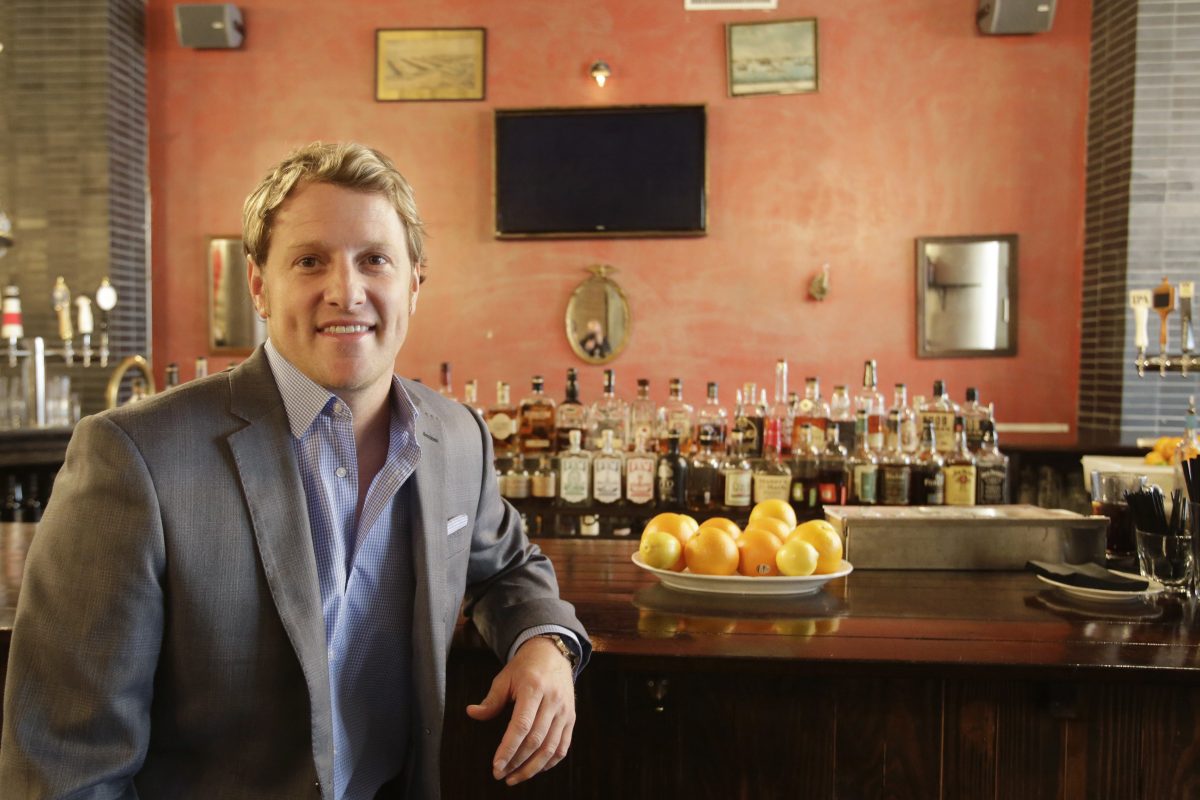 Jayson Seaver poses for a photo in New York's Harding's restaurant, of which he is a part owner, on Dec. 16, 2014. Seaver feels the wealth gap has affected his relationship with his sister. (AP Photo/Mark Lennihan)
People

NEW YORK—When Jayson Seaver thinks about why he makes so much money while some Americans can’t catch a break, he thinks of the sacrifices he’s made, the jobs he worked to pay for college, the 12-hour days he spends at the office now.

And he thinks of his youngest sister, Jackie, whom he practically begged to go to college and how she refused and is “paying for it” now, watching with envy while he flies around on vacation and enjoys his wealth.

At least that’s how he sees it. She has a different view. But they don’t talk much.

It’s a story as old as humankind: People raised in the same home, at the same time, by the same parents, who as adults land in vastly different financial circumstances.

Experts see a growing trend. The same forces that have increasingly separated the richest Americans from everyone else is dividing brothers and sisters, too. It’s given rise to a mix of often conflicting emotions — jealousy and resentment, disappointment and distance, but also frequently understanding and respect.

From 2009 through 2012, income for the wealthiest 1 percent of households surged 31 percent, after adjusting for inflation, according to research by economist Emmanuel Saez of the University of California, Berkeley. For everyone else, income inched up just 0.4 percent.

As the wealth gap has widened, some mental health professionals say they’ve seen more patients for whom such a divide has become a personal issue.

In 35 years practicing psychotherapy, Janna Malamud Smith says she’s never had so many clients troubled by sibling wealth. The complaints have grown so familiar to her she can riff on them without pause:

“‘My sibling can afford to join this country club, and I can’t.’ ‘My brother has houses in four countries, and why can’t he help me out?'”

There’s more than one reason Stuart Schneider and his siblings stopped speaking years ago. But Schneider, 53, thinks the problem began when he struck it rich in the late ’90s selling high-end textiles and began driving a Land Rover and sporting a Rolex watch.

“I thought they would be proud of me,” he says, referring to his sister and recently deceased brother. “But it really wasn’t that way.”

Likewise, VP Young Chang, co-owner of a Los Angeles clothes company, thought his cousins would be pleased he could afford a Ferrari and BMW 7 Series — until he showed up to a family party a few years ago in one of the cars.

Now, when the family gets together, Chang borrows his mother’s van.

A decade ago, sociologist Dalton Conley produced research suggesting that income inequality in America occurs as much within families as among them. Yet the similarities tend to end there. In comparing yourself with rich strangers, Conley notes, you can always convince yourself that they inherited wealth or attended elite schools or had parents with connections to lucrative jobs.

That doesn’t work if your brother or sister becomes wealthy. A disparity in siblings’ fortunes can feel, Conley says, like a judgment on intelligence or drive.

“You had pretty much the same advantages and disadvantages growing up,” says Conley, author of “The Pecking Order: Which Siblings Succeed and Why.”

Such tangled feelings of success and failure can have a public impact, too. How Americans feel about the wealth gap within their families shapes how they feel about it nationally — whether or not they see it as an inequity that must be addressed, says Lane Kenworthy, a sociologist at the University of California, San Diego.

Economists ascribe the wealth gap to a range of factors. Some cite superstar pay for the financial and technological elite. Others highlight the role of low-wage workers overseas in shrinking wages for middle class Americans or how machines and software are replacing people on factory floors and in office cubicles.

Poll results suggest a paradox in the public’s view: Americans might resent a wealthier sister or brother. Yet many people think the wealth gap is due mainly to the tendency of some people to work harder than others.

And it’s not even clear most Americans worry about income inequality anyway. Fewer than half in a Pew Research poll last year thought the gap between rich and poor a “very big problem” — nearly the lowest level among the 14 rich countries where Pew conducted polls.

“They know, or think, it’s due to effort and choice” in their family, Kenworthy says “And they think that’s probably how it works in the nation as a whole.”

The last time Jayson Seaver tried to persuade Jackie to attend college was Christmas 2004 at their parents’ home in Appleton, Wisconsin. She had just quit a waitressing job so she could move with her boyfriend out of state. She had little money, no health insurance and, as far as Jayson could see, a bleak future.

But Jackie, then 18, was having none of it. And the anger between them mounted.

“You’re destined for a life of mediocrity,” he said.

Economists differ about how much weight to give the various factors behind the wealth gap, but they generally agree on one thing: College matters, in part because many of the middle-income jobs once available to those who skipped it are disappearing.

According to a Pew Research analysis of Census data, the average income of a household led by someone with just a high school degree fell 5 percent from 1991 to 2012, adjusted for inflation. By contrast, income for households led by the college educated rose 9 percent.

As with the nation, so with the Seavers.

Jayson went on to make big money at a commodity trading company — $300,000 or so in his last job, by his own estimate. He invested in a restaurant in Manhattan, where he lives. He vacations in Florida, Costa Rica and Hawaii.

Jackie went back to waitressing, married the boyfriend and took a job at a drug company, where her boss called her a “top candidate” for promotion. But he turned her down because he said she needed a college degree. Now, rather than jet around on vacation like her brother, Jackie and her husband tend to go camping. Yet she says she’s happy with a more modest lifestyle.

Asked about the nation’s wealth gap, Jayson says, “You get paid what you put in. We’re in control.”

Jackie isn’t so quick with a response. She wonders if there’s more behind the trend than some people working hard and making the right moves and others not. Still, in the end, she essentially agrees with her brother.

“It’s self-motivation that’s at the root of success.”

Jeff Nash, 68, thinks the nation’s income gap largely reflects peoples’ varying talents and careers, a trend he sees in his own family. He became a stock broker, then a venture capitalist. His brother chose acting, his half-sister, teaching.

“There’s been income inequality since Adam and Eve,” he says. “Different siblings have different abilities.”

Only 3 percent of America surveyed about the wealth gap by Gallup in March felt it was the country’s “most important problem,” fewer than those who cited foreign aid and immigration. Asked in an October poll by Pew Research to name the most important reason for the wealth gap, 24 percent chose “some work harder than others,” more than tax policies, foreign trade or the educational system.

Among dozens of people interviewed by The Associated Press, many revealed similar views. Jessica Sonday, 31, a software saleswoman in Oregon, says it’s only natural that her brother, Benjamin, should earn multiples of her pay. He was always “academic” and focused on career, she more of the “social” type.

She went to work in radio after college. He earned a Ph.D. in mathematics from Princeton, then made more than $200,000 at Goldman Sachs before joining an auction website for art collectors.

Nathan Spencer, 33, an insurance salesman in Raleigh, North Carolina, does think the wealth gap is a problem. Yet he’s quick to defend the wealth of his brother, Eric, a partner at a New York architectural firm:

Spencer took a circuitous career route after dropping out of college before landing at an insurer in North Carolina, where he’d moved from Boston to escape the city’s high costs.

Psychotherapist Smith says people seem almost “hard-wired” to measure themselves against others with more material success. With siblings, the comparisons can be particularly fraught. Relationships among brothers and sisters are so complex, she says, that siblings often seize upon gaps in wealth as a shorthand for other differences between them.

Jackie Seaver says she doesn’t envy her brother’s wealth. What really separates them, she says, are differences in age and expectations, priorities and desires.

Still, she says her brother was correct about college in that fight at Christmas all those years ago. After being rejected a third time for a promotion, she started attending school at night to earn a bachelor’s degree.

For his part, Jayson seems to have inched closer to his sister’s view. In 2015, he will take a new job at a commodity brokerage that lets him work from West Palm Beach, Florida, where he hopes to buy a home and can “slow down and get back to the way I grew up” — a bit like the way his sister is living.

“I do envy her sometimes her simple quality of life,” he says. “It’s hard to determine who is the smarter, who is in a better position.”