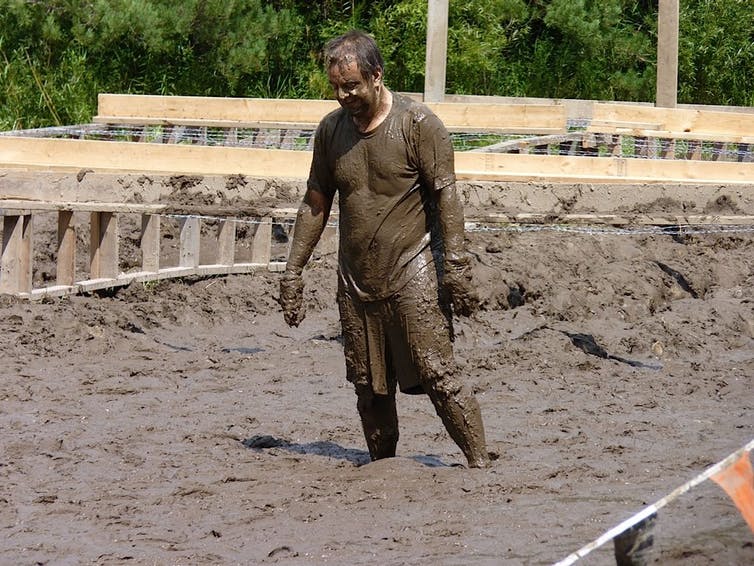 The author, Joe Recupero, as he competed in the Tough Mudder race in 2014. (Alison Webb, Author provided)
Wellness

How to Use Sport as a Defence Against Ageism

We have been taught from the time we are children that outbursts of anger are unproductive and socially unacceptable. But if channelled properly, there is an upside to anger—and is most often evident in sport.

The field of play has always been an acceptable outlet for healthy aggression and combat. We compete as athletes, weekend warriors and casual recreational players at sport and events like Tough Mudder to fulfil needs, to seek out camaraderie, attain a sense of team and community, to test our bodies and our limits, and to blow off steam from our everyday lives and workplaces.

Tough Mudder is an extreme endurance event which comprises a 10- to 12-mile obstacle course run and is an example of this connection between sports, masculinity and modern capitalism.

When competing in any athletic or recreational sport there is a battle of wills and bodies to achieve success and be the ultimate warrior. We learn this from an early age in the schoolyard and sports field. We then take this into adulthood and our careers.

It teaches us how to relish our victories, but also how to bounce back from setbacks and disappointments, which we can also translate into our professions, ambitions and corporate boardrooms.

I have worked in sport media and production for nearly 30 years. For many years I worked at CBC TV Network Sports as a producer and had the privilege of working on 13 Olympic Games, many other multi-day sporting events, World Cups, and championships in almost every sport.

During the last 10 years, I have taught sports journalism and production, and I’m the Program Director of Sport Media in the RTA School of Media at Ryerson University. My creative and research interests focus around resiliency and diversity in sport and media.

I have often used sport as a source of resiliency when going through anything traumatic in my own life. Running marathons helped me cope with the stresses and anxieties of school, work, and even the early deaths of my parents. Sport and endurance races also have the subliminal effect of outrunning old age, illness, and death: If you can only keep active and regularly exercise and keep running, then the bad stuff can’t find you.

A few years ago, when I turned 50, I was in a career transition. After one job interview, someone told me I was “not the right fit.” I interpreted this as a subliminal form of ageism because on paper I fit all the criteria. This created a low-grade depression. I did what I had done many times before—I dug in deep and channelled my anger into pursuing an athletic challenge.

A recent article and study in Zoomer magazine looks at the toxic effects of ageism in the workplace and society and addresses how it is bad for the health for those over 50, and for the younger millennial set who face a disconnect about getting older.

Enter a friend who was in rehab for a knee injury with the suggestion that I join him and three of his buddies for a Tough Mudder event. It was only three months away and the biggest question was would I be ready in time?

The last couple years had put me in a fitness deficit and I was definitely not in shape to do a half marathon (which had become more my speed in the last decade), let alone a Tough Mudder, which I knew very little about. I did a bit of homework and found obstacles with fear-inducing names like “Ring of Fire,” “Electric Shock Therapy” and “Arctic Enema.”

What I neglected to pay attention to was how much upper body strength training was advised. I have always been more concerned with cardio workouts—running, playing sports and biking. But the Tough Mudder is non-stop monkey bars and jungle gyms for miles. I now have huge respect for all those people who paid attention to strength training and its benefits, especially for those of us later in life.

Come race day, we found ourselves in a sea of millennials, many sporting the different colored Tough Mudder headbands that indicated how many you had previously completed—the badge of honor. I knew the goal was to walk out at the end of the day with one of those headbands.

We were clearly the oldest team competing, but that did not sap our energy and enthusiasm. In fact, we let that fuel us. We knew we were old enough to be the parents of most participants, but as we went through each obstacle and “earned our way in” we would catch the looks of surprised staff and teams who must have thought we somehow ended up on the course by mistake.

But with age sometimes comes some wisdom. Through some climbing and water obstacles, we were also able to point out smarter, faster ways of working. A couple of our teammates were the first to easily mount “Everest”—a half pipe snowboarding obstacle which required you to run up the curved wall, grab the top and throw yourself over and straddle. They were able to grab onto and help over many younger competitors that struggled getting over the lip of the half pipe.

Yes, we were all older and our bodies definitely not as lean, muscular, or imposing, but we were there slogging through Tough Mudder just like the rest of them.

In a sporting arena where ageism can be so prevalent, the mere sight of older folks is a bit disconcerting to some. Sport can be a tremendous source of support and resiliency. Somehow the playing field can be the great equalizer and challenge stereotypes as it dismantles myths around aging.

Crawling through one of the last and most challenging obstacles, “Mud Mile,” was definitely the moment I thought “what am I doing here?” But we persevered and finished the course.

Getting through Tough Mudder turned out to be one of the proudest physical achievements in my life. At the end of the day, as we tried to shower off the never-ending mud in the huge communal outdoor showering area, I let the water wash over me and I felt euphoric.

Is 50 the halfway point, mid-life? This is what I have heard from many of my friends as they attempt to make me feel better about getting older. Previously, I would disagree: “How many 100-year-olds do you know?”

After conquering Tough Mudder I plan to be one of those centenarians still fighting the good fight and not giving in to ageism.

Joe Recupero is progam Director – Sport Media / RTA School of Media / Assistant Professor at Ryerson University in Canada. This article was originally published on The Conversation.