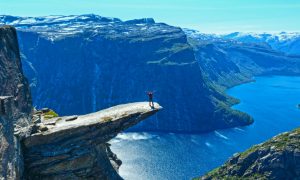 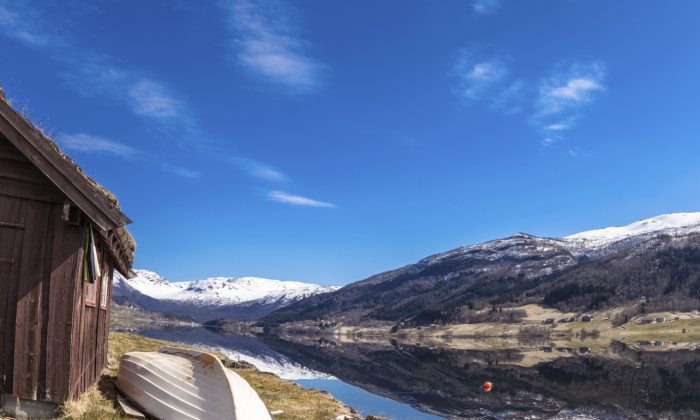 How to Travel Scandinavia Cheaply

It’s no secret that travel in Scandinavia can be expensive, so I am going to tell you how back in 2008 I managed to spend several weeks traveling through Norway, Sweden, and Finland on an average of $15 a day.

Considering that a beer in Oslo can cost $15 you may think I am a little nuts, but this is a post for those who want to see Scandinavia, but are put off by the costs. It can be done.

Forgive the quality of the photos in this post, but they were done on an old mobile phone in 2008 with a 2-mega-pixel camera!

First of all a disclaimer: This is not a post for people who are looking for a lot of comfort travel around Scandinavia. That being said, I did have some very comfortable living at times, and it didn’t cost a thing.

What is one of the best reasons to visit Scandinavia?

With wild mountains, forests, deep fjords, beautiful seaside locations, it can easily be considered the “New Zealand” of Europe. That should lead easily to the answer: Visit Scandinavia for the nature.

And what better way to see nature? Hiking and camping of course. That should give you a rough idea of where this post is going.

Yes, when I decided to pay a visit for a few months during the summer of 2008, I went mainly to see the great outdoors. They have a law where you are allowed to camp anywhere, as long as you are a few hundred feet away from someones property. That makes things a lot easier.

So the first step toward traveling cheaply is to camp everywhere, it wont cost you anything. Also, these days I would use couchsurfing to stay with people in the cities and towns. I didn’t have couchsurfing when I did my trip, so I basically explored a city or town just for the day when passing through and then camp in the wilds outside.

It’s easy to do this in summer, as it’s warm enough and you have 24 hours of daylight. As far as winter goes, the advice here would not really be valid, except for the couchsurfing aspect.

Getting between places I would hitchhike. People stop, no problem, for hitchhikers, especially in the north, where public transportation is not as common. And with hitching comes another benefit: Sometimes the people who give you a ride will also invite you to stay with them.

The Top Tourist Attractions in Sweden Not to Miss!

Oslo, Norway—Is It Really That Expensive?

Don’t count on being offered somewhere to stay, but when it happens it is great!

I had a family of seven in a camping van pick me up at 10 at night. Upon asking where I was staying that night, I replied that I would camp by the side of the road. They said no way and invited me into their lovely big house in the countryside. We ended up taking a sauna until 4 in the morning.

Another time two teachers gave me a ride and offered for me to stay at the university with them. And so on. You will meet some very hospitable people, especially in the north where it’s more remote.

Now for single women traveling, it could be a little more worrying about the hitchhiking, and staying with strangers. Just use your instincts and do what you feel you are comfortable with. If you don’t want to hitchhike, you can still save loads of money by camping, which is perfectly fine to do, as often you will be on popular hiking trails.

Hiking in the mountains of Norway and the north of Sweden really is worth it and is a highlight of Scandinavian travel, for me anyway.

As for food I lived of typical hiking fare such as ramen (instant noodles), instant mash, tinned tuna, chocolate bars, amongst many others. These are cheap to buy and were actually my only travel expense. Sometimes I would spend as little as $5 a day. I wrote $15 a day at the top to average the costs out.

When invited to stay with people they would often give you food as well. Again don’t rely on being offered places to stay, but if you are lucky, it will happen.

As far as keeping clean, I would wash in the cool streams in the wilderness and wash my clothes by the side of them as well. Wearing only synthetic hiking clothes meant they dried very quickly. Just choose a sunny day to do it.

Now you may be saying “well this is all good and fine if you have camping gear, but what if you don’t”?

If you are already traveling in Europe without camping gear and only planning a week or two in Scandinavia, then it wouldn’t be worth the time to do what I recommend anyway, in fact it would be almost impossible.

Indeed to see Scandinavia properly, you will need at least several weeks, to appreciate the nature. From the mountains and fjords in the south of Norway, to the islands of Lofoten in the north, and the wild hiking trails in North Sweden, and the forests and lakes of Finland. And you could do more.

So given that you have at least a month to explore, then purchasing camping gear on the way to Scandinavia (say in Germany or Denmark) will actually pay for itself, over that month of camping. Then you can sell it at the end and probably get half your money back. Or keep it and use it for future camping trips.

Either way it will be cheaper than some of the other hotel/hostel options, and don’t rely on couchsurfing for everywhere. Having the camping gear will also give you the freedom to hit the trails and stop whenever you want, without having to worry about finding somewhere to sleep for the night. It really is the best way to see the place.

Now if you want to go out drinking and eating, take public transportation everywhere, and stay in hostels/hotels, then this post is obviously not for you, and you will not be able to see Scandinavia cheaply. But my travels are geared toward similar-minded people, looking to travel around on a budget, and still get to experience the best the countries have to offer.

So I hope this helped some budget travelers out there get an idea on how they can travel cheaper around this amazingly beautiful part of the world.

Copyright © 2014 by Backpacking Man. This article was written by Jonny Duncan and originally published at BackpackingMan.com.