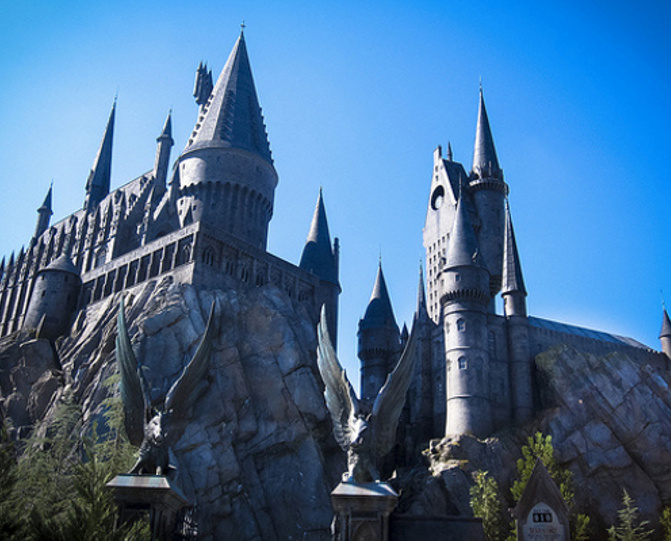 (Be My Travel Muse)
Travel

Nerd alert: I am a huge fan of Harry Potter. I’ve read every book, cover to cover, and naturally fancy myself a Gryffindor, even though every online Sorting Hat quiz comes back with my best match as Slytherin (what’s up with that? Weird).

When my equally nerdy friend, Brittany, told me that the Wizarding World of Harry Potter at Universal Studios in Orlando was actually pretty well done and accurate, I decided I had to see it for myself. With that, the planning and execution of our Orlando Trip began.

It was highly important to me that we not go in the summer months, when it would be the most crowded, expensive, and hottest (90 degrees and higher with 50%+ humidity… no thanks). Ergo, we selected my favorite shoulder month: September.

On the way in, we passed through a colorful (albiet a little run-down) Dr. Seuss land, and I felt like a 6-year-old again.

These rides weren’t really made for people our size though, so we moved on. Time was a’wasting.

We rounded the corner and entrance of Hogsmeade greeted us with a friendly reminder:

Real-life Hogsmeade did not disappoint. Despite the frosty roofs being a bit unbelievable in the 80-degree heat, the similarities with the books and movies were pretty spot-on. We stopped by Ollivanders to watch him pick a budding “wizard” from the crowd of tourists.

He didn’t pick me. Whatever.

He performed three tests to select the perfectly matching wand. Oddly enough, every wizard who passes through here does the same three tests, and performs each one the same, ending up with the exact same results… must be magic.

Then we made our way through a very crowded Dervish and Banges where they had wands galore. Resolving that I probably couldn’t get much practical use out of a wand, I marveled at the Monster Book of Monsters instead:

Just outside sits the Owl Post where one can mail really dorky Harry Potter postcards to her equally dorky friends at home, saying things like, “Hey, I’m at Harry Potter land, and the only person not with me right now who likes Harry Potter is you… and perhaps you would have liked to be here. Oops, now I’m bragging.”

Other notable stops include Zonkos, a toy shop that would have really appealed to me, were I a 13-year-old boy (think whoopee cushions, extendable ears, and the like). Along with the very best and most tempting of all: Honeydukes. I loaded up on chocolate frogs, pumpkin juice, and rock cakes, somehow managing to pass up the acid pops, Fizzing Whizbees, and exploding bon bons: