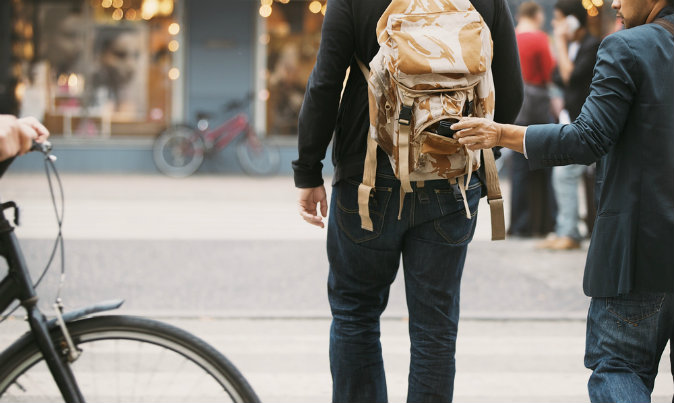 How to Prevent Against Being Pickpocketed

I can’t be pickpocketed. Well, I’ll rephrase that: I have no fear of being pickpocketed. In fact, I don’t even thing about pickpockets when traveling. This is because I keep nothing worth taking in the external pockets of my pants, jacket, or backpacks. This is a simple remedy for making clandestine street theft a moot point: don’t carry anything of value in a place that can be pickpocketed and you have nothing to worry about.

Now, if someone wants to lift the dirty socks that are zippered up in the outside pockets of my rucksack or the toilet paper I keep stuffed in my back pants pocket they can be my guest, but I highly doubt they will be too thrilled by the fruits of such labor.

In 13 years of travel I’ve never been successfully pickpocketed, and I’ve only caught people trying to pickpocket me once or twice — which, of course, only resulted in me being on the receiving end of a good butt squeeze. Not the worst thing in the world, I must say.

Now, I do keep a small amount of money for daily expenditures (less than ten or twenty dollars) in the left front pocket of my pants that could potentially be pickpocketed, but my track record with with such thieves is so unmarked that I don’t feel that it’s necessary to inconvenience myself over it — especially for such a small amount of cash. In point, I’d rather risk losing $10 each decade of travel than have to reach my hand down inside my pants to access a hidden pocket every time I want to buy something.

It’s simply not worth the mental hassle for me to go around the world worrying about pickpockets. If you want to play a little pool in my pocket, go for it — I probably stand to gain more from the encounter than you will. But, I have to admit, I do have excellent situational awareness and I know the tricks and techniques of pickpockets well — both of which more than likely keep me out of many potentially compromising situations in this regard.
How pickpocketing works

There are a few methods that pickpockets employ almost universally around the world. This is one art form that is truly global. More often than not, pcikpocket schemes involve one of two strategies:

The stealth tactic is usually a crime of opportunity, and involves a victim who does not have their possessions properly safeguarded. This often happens when the pick sneaks up behind a mark and tries to insert their hand into the pocket of their bag, purse, or article of clothing without being detected. Often the target is busy doing something — such as working on a computer in a cafe, or is engrossed in watching a street performance, or is walking down a crowded street ect . . . Backpacks or purses slung over the backs of chairs are golden beacons for pickpockets.

Two pickpockets fighting each other and a third (or fourth or fifth) robbing anyone who stands around watching.

A pickpocket pulling up the skirt (or otherwise sexually assaulting) a woman who is with a group of friends. When her friends jump to her aid and try to fight off the offender his accomplices lift their wallets and valuables.

Someone squirts ketchup/ mustard/ bird shit onto your pants and then a friendly stranger serendipitously appears with a napkin to wipe it off. Of course, they are also stealing your wallet. This one is incredibly common and completely irritating.

The bump and run involves someone bumping into you as a diversion while digging in your pockets. This is often done by women with purses — they push their purse up hard against you while swiftly doing a sweep of your pockets.

The stop and grab attack often happens when you’re walking down a street and the person in front of you all of a sudden stops, which makes you run into them or otherwise stop in your tracks while the person behind you “accidentally” runs into you. It is the person to your rear that’s the thief.

The funnel is when two pickpockets squeeze you from both sides while one or both work your pockets.

The lure of attraction is when an attractive individual, usually a woman acting drunk, comes up and clenches your arm or gropes you in some way as a distraction while they swipe your possessions. This one is especially onerous, as you are lead to believe that you’re about to score. When there is the prospect of sex your defensive instincts tend to wan, or you decide that the potential of getting lucky is worth the risk of being robbed. This scam is truly screwed up.

The do-gooder pickpocket tactic involves creating a situation where the mark is put in a position to be a good citizen. Such situations involve someone falling in front of you and then you get pickpocketed as you help them back up to their feet. Another scenario is where one member of a pickpocket team will spill a bag of groceries (or something) right in front of you, baiting you into bending down to help them pick it up. While you are engaged in doing so, another member of the team will be lifting things out of your pockets. These schemes involve cuing in on a person’s natural inclination to help people, and then using this to bait them into a trap.

The lost tourist scam involves asking directions while pulling a big map out in front of you. The map serves as a diversion as well as a prop to block your view of the person pickpocking you.

A similar tactic involves a pickpocket reading a newspaper while sitting next to you a bus. They start a friendly conversation while unfolding the newspaper out a little over your lap. The newspaper blocks your view of the thief removing items from your pocket.

1. Prevention. This is key to staying clear of all types of theft. It is always best to not make yourself a target to begin with. First, you do this by not baiting thieves with exposed wallets, nice watches, expensive handbags, fanny packs, valuable jewelry etc . . . When traveling abroad, you’re a big enough target for street crime as it is, so keep the status symbols at home. Second, you do this by keeping all your valuables in inaccessible places. Someone would need to physically restrain and hold me at gun/ knife point to get anything of value because I keep it all in hidden pockets sewn into the interior of my clothes or in a money belt that’s tucked inside my pants. Neither can be readily pickpocketed.

2. Awareness. It is key to know what’s going on around you when traveling, especially when there are distractions. Know the types of places and situations that thieves operate in as well as their strategies. If an old lady falls down in front of me I look around and check out the scene before deciding to help or not. If someone just randomly stops walking in front of me I give them a good push (except in China) and look to see if a pick is approaching from behind. If I’m in an urban area and the crowd I’m walking in funnels and slows (such as when going through construction zones or when approaching major public transport hubs) I become hyper-aware of my surroundings, as this is a prime set up for theft. In point, anytime strangers are packed in close to me little warning sirens go off in my head telling me to be on guard. This is just a general safety procedure rather than solely a precaution against being pickpocketed.

3. Detection and defense. If you feel a stranger intentionally touching or bumping into you with seemingly benign intentions in public there is a reasonable chance that they or their partner is trying to pickpocket you. There is rarely a reason for a stranger to touch you in public anywhere in the world, so if a friendly person tries to move from talking to touching, make distance from them fast. Especially don’t trust people trying to help you with any sort of body contact — remove yourself from the situation first and take care of whatever the problem is yourself or, if you truly need help, go into a shop or restaurant and request the assistance of the people working there.

As a tourist in a foreign place is not expected to feel responsibility for the people there. So many scams involve guilting travelers into helping locals. There are incredibly few scenarios when a local is ever going to genuinely need the help of a foreigner. If someone requests your help in a foreign country for any reason, suspect that you are being lured into a trap.