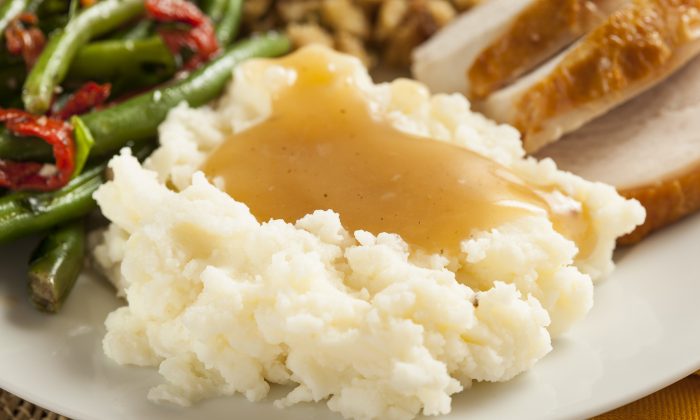 How to Make Mashed Potatoes for Thanksgiving: Recipes From Scratch, With and Without Skin and Milk, etc

Thanksgiving is almost here and people are wondering how to make mashed potatoes.

There are a number of different ways to create this delicious dish, including with or without skin.

Let’s check out multiple methods of delivering this creamy delight onto the table. All the recipes are from scratch.

First, bring a pot of salted water (enough to cover the potatoes) to a boil. Add the approximately two pounds of potatoes, which are peeled (or not) and quartered.

Cook the potatoes until tender but still firm, which should take about 15 minutes. Then drain them.

Next, in a smaller saucepan heat up two tablespoons of butter and one cup of milk over low heat until the butter is melted. Using a beater or masher, blend this mixture into the potatoes until smooth and creamy.

With Sour Cream and Skin

Dice a 16 ounce bag of potatoes and combine with one cup buttermilk, four cloves of finely chopped and roasted garlic, and four teaspoons of butter seasoning in a pot.

Cook for about 12 minutes on high on a stove or microwave on high for the same amount of time, stirring halfway through.

Mash until creamy but lightly. Garnish with chopped chives. Via Sandra Lee

Take them off the stove and let them cool.

Use a masher or a ricer over a bowl. Mix in salted butter with a wooden spoon until it has the right consistency, usually about three to four tablespoons. Add salt to taste. Via Steamy Kitchen

Cook potatoes after rinsing, and then rinse again after boiling.

Drain and spread out on baking sheets, then dry in a warm oven to remove excess moisture. Use a masher or ricer or similar device after adding butter and sour cream. After they’re mashed well, add some cream.

Put in a baking dish and cover with plastic and this will last for as long as five days.

When ready, take out and let sit for about an hour.

Spread in a casserole dish. Add a topping such as the recommended mix of bacon, cheddar cheese, and scallions. Cook on 350 degrees for about 45 minutes and the topping is browned. Via Serious Eats.

See all our great THANKSGIVING RECIPES