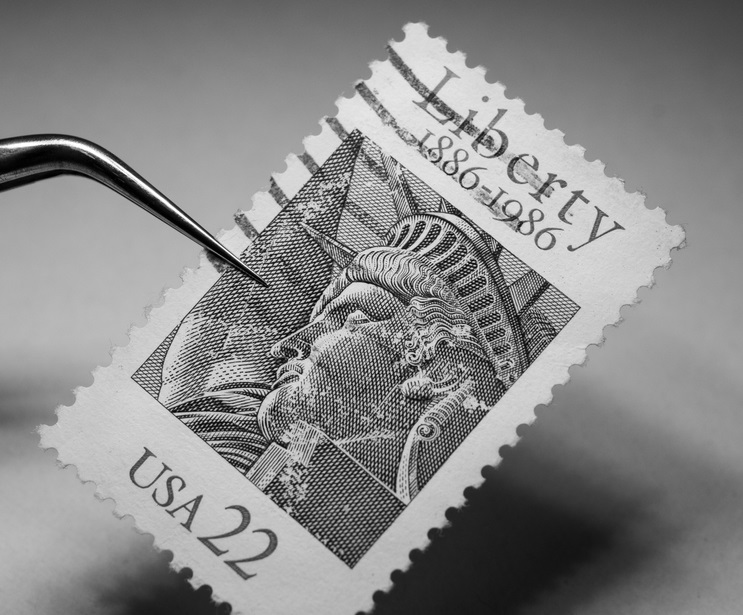 How to Invest in Postage Stamps

Some stamps qualify as miniature pieces of art, which by itself makes them collectible. Read on to see why these heritage assets are viewed by many as viable alternative investments.
BY Bill Lindsey TIMEJuly 23, 2022 PRINT

What we now call stamps were invented by Henry Bishop, London’s postmaster general, in 1661. Originally, a handstamp was used to indicate the postage had been paid to send a parcel or letter, coining the term “stamp.” In 1840, Sir Rowland Hill invented the first adhesive stamp, the forerunner of today’s postage stamps.

We use them to send postcards and pay utility bills, but for the most part, as more goods and services are paid for via online methods, postage stamps seem to be from a bygone era.

With their diminished use, collecting stamps as a hobby has fallen out of favor, but under some circumstances, stamps can be part of a diversified investment portfolio. Stamp collecting isn’t to be confused with investment-grade stamps; in a personal collection, there may be emotional connections, such as countries visited, while as an investment, the only compelling factor is the potential for appreciation.

Not unlike old coins, the vast majority of stamps don’t qualify as investment grade. While this means that old cigar box in the closet or attic full of dusty stamps probably doesn’t hold one with the same value as a private island in the Florida Keys, it can happen.

In 1873, a 12-year-old Scottish boy spotted an odd stamp among his uncle’s papers; he sold the worn and unusual stamp to a collector. The stamp, a one-cent 1865 British Guiana, was later acquired in 1878 by Count Philippe de la Renotière, who owned what has been described as the most complete worldwide stamp collection ever to exist. After the count’s death, the stamp and the rest of his collection were donated to Berlin’s postal museum and then made their way around the globe.

In 1980, the Guiana stamp was acquired by John E. du Pont for $935,000. After du Pont’s death, which occurred while he was in prison for murder, the stamp was sold at auction in 2014 for $9.5 million, making this rather odd-looking stamp the most valuable in the world, and du Pont’s investment a rather good one.

The world’s overall supply of investment-grade stamps is limited. However, this supply can be diminished by fire, theft, water damage, insect damage, and other unforeseeable scenarios. As a result, while every investment has risks, a carefully chosen stamp can increase in value, with such increases usually taking place over the course of many years, making stamps a long-hold proposition.

Unless you happen across an inverted Jenny stamp (a run of 100 stamps in which a World War I Curtiss JN-4 biplane is depicted flying upside-down) in a stack of old mail found in the attic, the two most common sources of investment-grade stamps are dealers and auction houses.

Before you buy, you need to know what to look for. Rarity is always a huge factor in determining current value and potential appreciation, but another factor to consider is the stamp’s condition; this ranges from mint, never used, and perfectly printed with zero defects, to good, with defects, creases, tears, faded ink, and other obvious signs of use. These factors will impact the purchase price regardless of how or from whom you acquire the stamp.

An auction held by a reputable, experienced house such as Sotheby’s, David Feldman, Corinphila Auctions, Stanley Gibbons, Daniel Kelleher Auctions, or others can be a sound way for a knowledgeable investor to acquire asset-grade stamps. Potential buyers can attend these auctions in person or online. Dealers represent another source, and a bargain may be possible if a stamp dealer needs to liquidate inventory to make another acquisition.

As is the case in buying anything as an investment, there’s no such thing as having too much knowledge of the time under consideration. Sotheby’s postage stamp auction catalogs are highly sought-after sources of information and value.

Be aware that buyers at an auction will have to pay a buyer’s premium in addition to the winning bid. Premiums are typically 10 percent of the winning bid; always confirm the premium amount prior to bidding.

Investors should consider dealing only with auction houses that will agree to have the stamp certified for quality and grading prior to the buyer taking delivery. If the quality or grade is found to differ from the auction’s description, the transaction can be canceled or perhaps revised. In any scenario, having a stamp certified can help to avoid conflicts between buyers and sellers.

Protect your investment-grade stamps by storing them in a cool, dry place inside sleeves and/or upright albums. Consider insuring them against theft or damage.