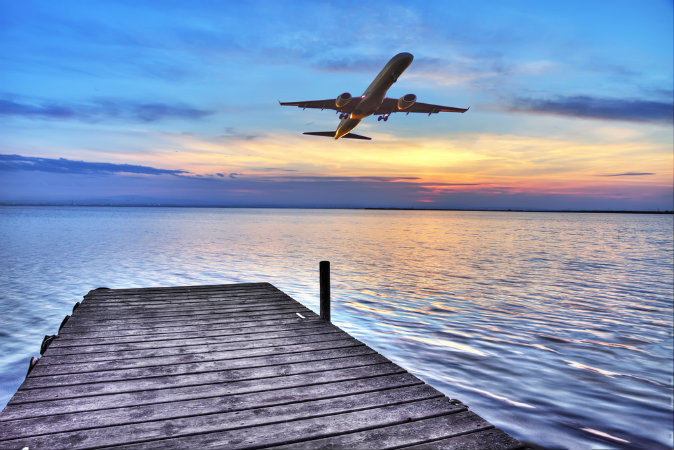 How to Find Cheap Airfare

There are a handful of trick and tips that any traveler can use to find the cheapest airfare possible without putting an enormous amount of effort into it. The following is some advice on how to fly for less.

The algorithms that airlines use to price their tickets are complex. Keep in mind that there are roughly ten different pricing tiers on each flight for economy class alone, and only around 10% of these tickets will be at the cheapest fare. This means being one of the lucky passengers that lands one of these cheap seats is not only a matter of chance, but is also a true art form. Now, I’m not going to get into the specifics of airline pricing here, but I will say that competition with other airlines, the date and time you book your fight, supply and demand, as well as the simple luck of the draw plays into what price pops up on your computer monitor when shopping for a flight.

Where to buy airline tickets

I have to admit that finding cheap airfare is no longer the art it once was. I can remember having to dig through the depths of the internet in order to uncover deeply buried super cheap plane tickets. Now, as the major airlines, ticket brokers, and comparison sites like Kayak have, for the most part, consolidated their efforts, and the chances of finding the “oddball” cheap fare has greatly decreased. But, on the other hand, getting a good idea of the price range for flying to a particular destination and buying tickets has never been easier.

Generally, one big airfare comparison site has just about the same prices as all the rest. Now, there is sometimes variation, but the times that I now see big differences are rare. So what booking engine you use is a matter of personal preference, but quickly checking a couple more won’t hurt. I usually begin my flight searches with Kayak, and then do quick checks on Momodo and Skyscanner.

Now, keep in mind that many of the smaller and/ or budget airlines don’t list their prices on these big comparison engines, so if you’re really into getting the best fares you’re going to have to do some leg work and also check on these airlines’ own sites as well.

Another thing to look out for are deals that airlines sometimes only offer if you book through their website. So, when you find yourself interested in grabbing a flight that you find through a comparison engine, opening a new window in your browser (or better, using a second computer), and doing a quick search of the airline’s own site may save you a little cash.

Contrary to this tactic is that fact that some airlines sometimes offer special deals only for users accessing them through the comparison engines, so the advantage can go either way depending on circumstance. My advice is to check them both.

I usually browse a couple airfare comparison engines just to get a good idea of what I’m going to have to pay for a flight in a particular range of time, and then I try to find these flights cheaper through more specified means.

When to buy plane tickets: don’t buy at the last minute, but not too far in advance either

Aim to purchase a flight between three and a half months and three weeks prior to your departure date. Booking earlier or later than this and you’ll pay more.

A multitude of individuals have told me many times over the years that you can get super cheap airfare by buying your ticket at the last minute. Though it’s not my impression that any of these people have actually done this. But, believe me, I’ve tried and tried, and I must admit that 13 years after I began traveling I’ve never landed a super cheap last minute fare. In point, planes are all too often packed these days, so the “once upon a time” last minute deals that used to help airlines fill their flights are no longer necessary — and they now even boost their price roughly 10 to 14 days prior to departure to take advantage of business travelers who don’t know their schedule far in advance, and are often less likely to care about dropping the extra cash for a flight. Now, if you try to book a flight right before departure date the airline will be likely to assume that you’re a business traveler flying on your company’s dime, so don’t try this method.

But don’t buy too early either.

Many airlines don’t start managing their prices (i.e. pricing competitively with other airlines) for a flight prior to four months in advance, so you’re not going to have access to the cheapest flights until you’re inside of this window.

There are many myths surrounding this tip, including “buy just after midnight because that’s when the fares are cheapest.” These “insider tips” are often BS. Though you can use airline price changing habitsto guide when you push the “purchase” button.

Generally speaking, the cheapest days to buy a plane ticket are at the beginning of the week. Some analysis say Tuesday at 3PM is the best time to buy a flight. I’m not so sure about this, but I know that looking for flights on Monday, Tuesday, and Wednesday will generally produce cheaper results than later in the week.

Keep in mind that airlines generally change their prices at various points throughout the day as they try to match or beat their competition, so keeping on top of this game will often mean getting a cheaper fare. I advise looking for price changes around midnight, in the morning, and in the mid-afternoon, though this is only my speculation.

Book one ticket at a time

If you are flying with other people, airline booking systems are programmed to give everyone in your party the same fare, even if cheaper fares are available which one or two of you could of had otherwise. To make sure everybody you’re traveling with gets the best priced flights, purchase them one at a time and worry about seating later. This minor hassle could save you a decent wad of cash in the end.

Fly at the right season

The first rule to finding cheap airfare is to be aware of the seasons and know when the prices of flights rise and when they fall for your departure and arrival points.The key is finding when the fewest other people want to travel your path.

For example, Costa Rica is a prime location for people from the USA/ Canada/ Europe to visit on their holidays, so the country is usually packed full of people from these countries during the summer months, December, as well as during college spring break. During these times the cost to fly to this country skyrocket. But if you go there in January, February, October, or November it is rather easy to find dirt cheap airfares.

Likewise, be aware of the yearly college schedules of the country you’re flying in or out of. Countries like the USA and Canada have huge amounts of foreign students, professors, and researchers piling into them just before university semesters begin and trying to get out of them when the semesters are finished. So trying to go to these countries at the end of August and the beginning of January, and leaving them in early December and June are bad bets for finding cheap airfare.

Another thing to be aware of are local holidays. In point, you do not want to be flying to or away from China during their national holidays when then entire country seems to trying to travel. Attempting to book a flight in or out of here during this time is a sure shot way to add hundreds of dollars to the fare.

The same goes for all other destinations in the world: know the culture and yearly schedules of your departure and arrival cities, and, if you can, fly when the demand is lowest.

*Image of a plane via Shutterstock