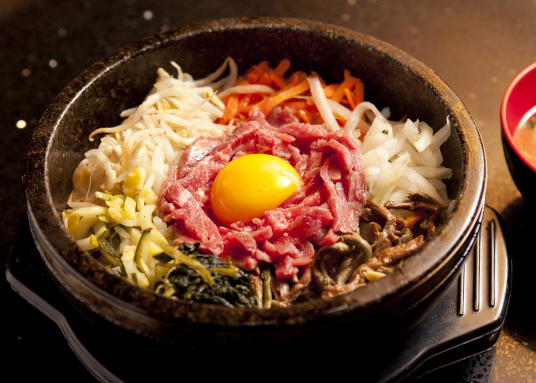 How to Eat Dolsot Bibimbap

NEW YORK—Dolsot Bibimbap, literally meaning “stone pot mixed rice”, is a combination of rice, vegetables, meat or tofu and egg served in a hot stone bowl. At home, most Koreans simply eat bibimbap (“mixed rice”) out of a regular bowl, sometimes made from leftover ingredients, sometimes made fresh with the ingredients already cooked.

Other variations include hoedeopbop made with seafood, or heotjesa with soysauce instead of chili sauce and fried fish and jeon, a Korean pancake. Bibimbap can be eaten hot or cold, depending on the season or preference, but dolsot bibimbap is always made hot with the raw ingredients in a hot stone bowl.

“We get about 80% westerners,” said Sung Min, the owner of Hell’s Chicken, a Korean restaurant and bar in Hell’s Kitchen neighborhood of New York City. “I would say about half are not too sure how to eat it [dolsot bibimbap].”

To start with, most Koreans add gochujang, or chili sauce, and sesame oil on the top to give it more flavor. Then they mix it up like a tossed salad so that the raw egg, meat or tofu is cooked from the heat of the bowl. Again, it is supposed to be mixed (unless you prefer raw meat and eggs).

Once it is mixed up, it takes a few minutes for the meat to cook thoroughly, and if you like the rice a little crispy, leave the rice to cook at the bottom. To make sure the meat is well done, push it to the bottom of the bowl so it is kept warm by the other ingredients and close to the hot sides.

You may be served several side dishes even before the bibimbap arrives. While it is not wrong to chow down on those when they arrive, they are meant to be eaten with the meal to add some variety of texture and flavor. Koreans rotate side dishes depending on the season and also from meal to meal, so even if the main dish is the same, it always tastes a little different.

The dolsot bibimbap is meant to be shared so you will most likely be given a personal bowl where you can combine the sides with the bibimbap. These side dishes can include but are not limited to combinations of seaweed, kimchi, radish, ginseng, lotus root, spinach and scallions.

Soup is usually eaten with the bibimbap because, if the main dish is dry, Koreans think a wet side dish should accompany it.

“A lot of people ask whether the side soup goes into the bibimbap,” said Sung Min.

While he says you can do whatever you want, “Most likely the answer would be ‘no.'”

Koreans usually drink water during the meal, Sung Min says, and a sweet tea afterwards. Dolsot bibimbop is usually only served in Korean restaurants, but for those who have their own stone bowl and want to try it at home, a plethora of recipes can be found with a google search of “dolsot bibimbap”.