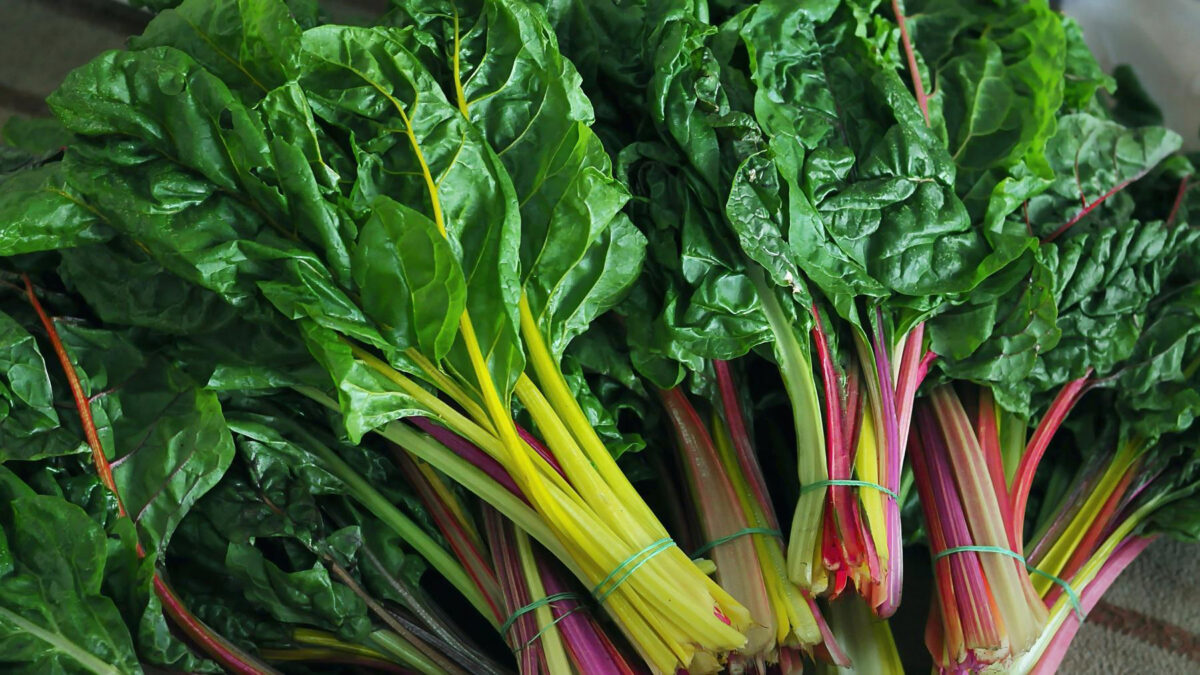 How to Cook Swiss Chard

If you’re wandering through the grocery aisles or farmers market in the spring and summer, there’s a solid chance that you’ve spotted chard, and its brightly-colored stalks may have drawn your attention. But what is that rainbow-colored leafy vegetable that sits near the kale and spinach? And what’s the best way to cook chard?

Also called rainbow chard or Swiss chard, chard is a relative of the beet and the greens of chard look really similar to beet greens. Unlike beets, you won’t find the root of chard for sale at the store or farmers market — it’s inedible.

It’s likely chard will stand out to you amid other leafy green vegetables because of its vibrantly colored stalks. It isn’t called rainbow chard for nothing — this veggie can be white, red, golden yellow, purple, orange, green and so on, and it’s really quite pretty. Each of these stems taste slightly different, too, creating a delightful eating experience.

The stalks, meanwhile, are crunchy, crisp and have a sweetness that falls somewhere between celery and beets.

Chances are, if you like spinach, you’ll like Swiss chard; the two are often compared to each other since the leaves taste similar and the vegetable can be prepared in a similar fashion. You can — and should! — eat both parts of chard, but it’s easier to separate the stalks and the leaves for cooking and storage.

How to Shop for Chard

You can spot chard at farmers markets from late spring to early fall, and it will be comparable in price and located near the kale at grocery stores. Select bunches that have crisp, dark green leaves free from blemishes or holes. The leaves should be firm, and the stalks should look snappy. Definitely skip chard with brown stems or wilted leaves.

How to Store Chard

Chard is easy to store. Just keep it unwashed and loosely wrapped in plastic, and it will be good for about four days in the vegetable drawer.

If you want to extend the life of your produce, you can do so by separating the leaves and the stems. Wrap the leaves in paper towels loosely, roll them up into a bundle and put them in a plastic storage bag. The stems will be fine simply stacked and wrapped in plastic wrap.

You can cook chard in many of the same ways that you cook spinach, and it’s a fine swap in salads, sauteed preparations or in quiches. Just know that when eaten raw in a salad, chard leaves will have a texture that’s more similar to kale.

One of our favorite (and more accessible) ways to cook chard is to use it in a cheesy gratin. Swapped for spinach, a large bunch of Swiss chard will bring a tart, robust flavor. And the best part about this recipe is that it uses the leaves and the stalks in all of their glory. If you find rainbow chard, that means you’ll have a bright and beautiful family-friendly side on the table.

Before making this Swiss chard gratin, or cooking chard in general, just be sure to wash it very, very thoroughly. Grit easily finds its way in the folds of the leaves and in the stalks, and nothing ruins a great veggie side dish like sand and dirt.

Once you master this recipe for Swiss chard gratin (and other chard preparations), read up on more spring produce and how to make those ingredients really shine.

This recipe by Peter Kemp originally appeared in The Chicago Tribune.

Step 1: Cut or tear the chard leaves away from the stalks and wash each separately. Cut the chard stalks into 1-inch pieces.

Step 2: Heat a pot of water to the boil. Add a few generous shakes of salt to the water and then the chard stalks. Cook until the stalks are easily pierced with a sharp knife, about 5 minutes. Remove the chard stalks with a slotted spoon and allow them to drain.

Step 3: Heat the water back to a boil and add the chard leaves. Blanch about 30 seconds. Remove and immediately run cold water over the greens to stop the cooking. Drain well and squeeze out excess water.

Step 4: Roughly chop the chard greens and combine with the chard stalks. Set aside.

Step 8: Bake the gratin until the top is browned and the chard is tender, not mushy, 10 to 15 minutes.