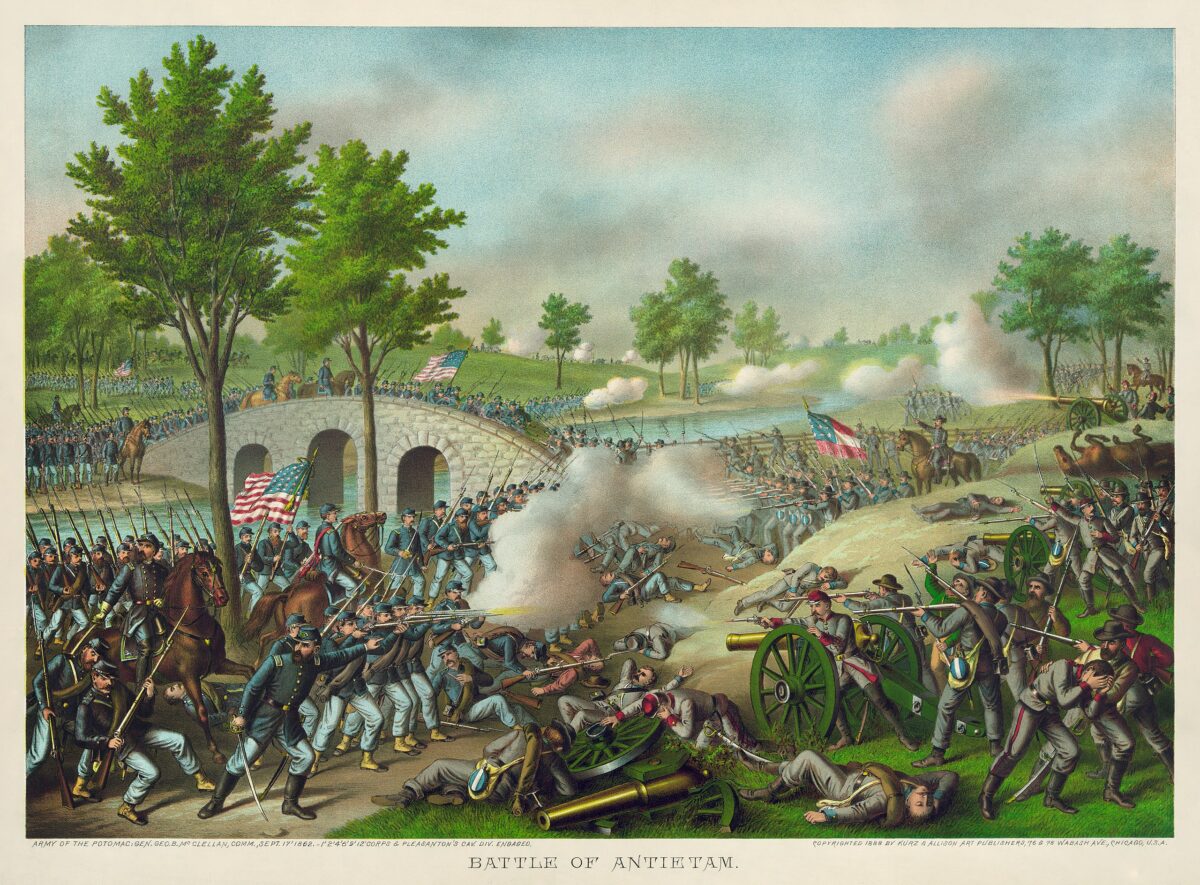 A color lithograph portraying the Battle of Antietam, the bloodiest battle ever fought on American soil, circa 1888. (Library of Congress)
American Essence

The bloody Battle of Antietam set the stage for President Lincoln to make a historic announcement
BY Rachel Pfeiffer TIMEJune 1, 2022 PRINT

President Abraham Lincoln had a great deal on his mind in the summer of 1862. The Civil War dragged on, and the very fate of the nation hung in the balance. As he considered his responsibilities and authority as president, his resolve for a new measure grew.

He invited Secretary of the Navy Gideon Welles and Secretary of State William Seward to accompany him one day in July. As his carriage rolled toward its destination, for the first time Lincoln spoke of a proclamation—a document that would change the course of American history.

“He dwelt earnestly on the gravity, importance and delicacy of the movement—said he had given it much thought and said he had come to the conclusion that we must free the slaves or be ourselves subdued,” Welles wrote.

The discussion continued throughout the carriage ride, and Lincoln urged Welles and Seward to give the proclamation more thought. The president felt strongly that something must be done.

Later in July, Lincoln drafted the document. However, he wanted to give this momentous proclamation added strength by coming on the heels of a Union victory.

Two months later, Union General George B. McClellan and the Army of the Potomac marched to halt the advance of Confederate General Robert E. Lee and the Army of Northern Virginia. Lincoln anxiously awaited news as the armies clashed northwest of Washington, D.C., in what would become known as the Battle of Antietam.

Robert P. Kennedy of the 23rd Ohio Volunteer Infantry later remarked on the significance of what unfolded in the late summer of 1862. “Upon this field of Antietam was fought one of the most desperate battles of the War of the Rebellion, upon the outcome of which hung the destinies and liberties of millions of human beings.”

After he received command of the Army of the Potomac on September 2, General McClellan wrote, “This week is the crisis of our fate.” This crucial week began with the lesser-known Battle of South Mountain.

After crossing the Potomac and entering Maryland, Lee thought the Confederate presence alone would drive Union forces from Harpers Ferry, a crucial location for ensuring lines of supply and communication. When this didn’t happen, Lee issued Special Orders 191 on September 9. The orders split the army, with the largest number of troops ordered to take the Union garrisons at Martinsburg and Harpers Ferry. Lee ordered the rest of the army to South Mountain and Hagerstown, where they were to protect several key mountain passes.

Robert Hall Chilton, Lee’s assistant adjutant general, wrote these orders and sent them to Lee’s generals. Before the orders were issued, General D.H. Hill was under the command of General Thomas “Stonewall” Jackson, so he received his orders from Jackson. However, the orders established Hill as an independent commander, so Chilton drafted a separate copy of the orders for Hill. This additional copy is where the confusion around Special Orders 191 erupted. Hill claimed he never received the additional orders Chilton sent. Instead, the orders fell into an entirely different set of hands.

Union troops fled Martinsburg, and the Confederates positioned themselves to take Harpers Ferry. However, this had taken longer than Lee had thought, and Union troops made an important discovery.

While resting from their march, troops from the 27th Indiana Volunteer Infantry discovered Lee’s orders enclosed with two cigars. They quickly realized the importance of the find and passed it along. The orders reached McClellan on September 13. He had no way of knowing how accurate the days-old orders still were. However, he did now know that Lee had divided the army. With this information, McClellan ordered an attack on the Confederate forces at South Mountain, aiming to take control of the South Mountain passes.

Casualties mounted as the battle raged. Union troops finally succeeded in driving the Confederates back, but the delay allowed Confederate forces to take Harpers Ferry. However, South Mountain marked a crucial victory for Union forces, and it set the stage for one of the fiercest battles of the war.

The Battle of Antietam

“Tomorrow we fight the battle that will decide the fate of the Republic,” some heard Union General Hooker tell his staff on the eve of the battle.

The fighting the next day was some of the worst of the war.

“It was the early gray light that appeared just before the sun rises above the horizon, and we could little more than distinguish each other,” Captain Albert Monroe of the 1st Rhode Island Light Artillery recalled. “We could see the first rays of the sun lighting the distant hilltops, when there was a sudden flash, and the air around us appeared to be alive with shot and shell from the enemy’s artillery. The opposing hill seemed suddenly to have become an active volcano, belching forth flame and smoke.”

Some of the heaviest fighting that day took place in what became known as the Cornfield. This 24-acre field changed hands no fewer than six times in just three hours. The Union troops eventually succeeded in driving the Confederates from the field, only to sustain many casualties in the West Woods. In total, the fighting in the Cornfield and the West Woods accounted for around 10,000 killed or wounded in just four hours.

“In the time that I am writing every stalk of the corn in the northern and greater part of the field was cut as closely as could have been done with a knife, and the slain lay in rows precisely as they had stood in their ranks a few moments before. It was never my fortune to witness a more bloody, dismal battlefield,” General Hooker reported.

The fierce battle continued on Sunken Road, later dubbed Bloody Lane, and at the bridge that crossed Antietam Creek. General Burnside and his men finally succeeded in taking what is now known as Burnside Bridge. Though the Union troops launched one final attack after taking the bridge, Confederate General A.P. Hill arrived just in time to drive them back. A horrific day of fighting came to a close. On September 18, Lee and the Army of Northern Virginia retreated back across the Potomac.

The Battle of Antietam marked the bloodiest day in American history, with 23,000 men dead, wounded, or missing after 12 hours of fighting. However, it also provided the opportunity the president had been waiting for to fulfill his promise.

Lincoln made a pledge, to both himself and God, that if the Confederate army retreated, he would issue his historic Proclamation. With Lee’s failure, Lincoln stayed true to his word. He issued the Emancipation Proclamation on September 22, 1862.

On January 1, 1863, the Emancipation Proclamation took effect, declaring that the slaves in the Southern states “shall be then, thenceforward, and forever free.” When President Lincoln signed the Proclamation, he did so without any doubt.

“I never, in my life, felt more certain that I was doing right than I do in signing this paper,” he said. “If my name ever goes into history it will be for this act, and my whole soul is in it.”