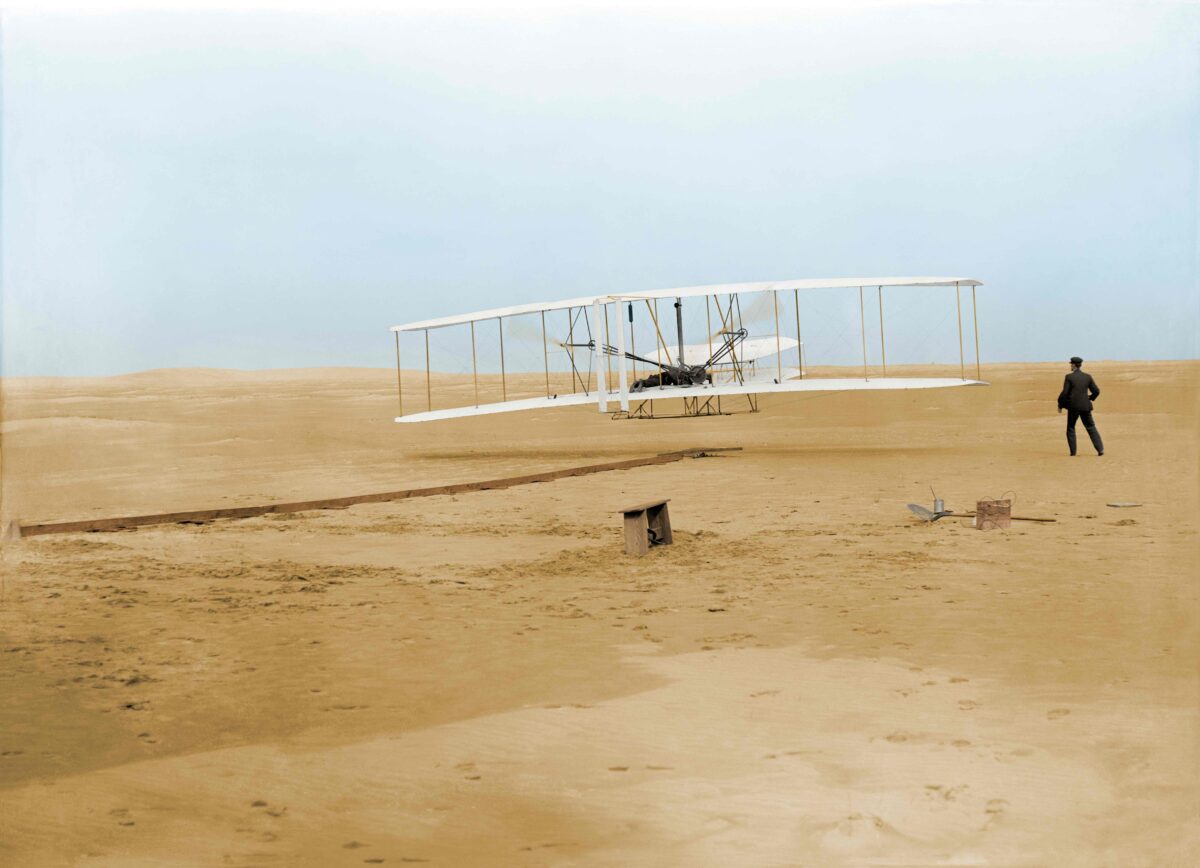 The first powered, controlled, and sustained flight was achieved in 1903 with Orville at the controls and Wilbur running alongside the plane to help maintain balance. (John T. Daniels)
American Essence

Standing near the sand dunes of Kitty Hawk, North Carolina, Wilbur Wright took a coin from his vest pocket. It was a sunny, warm day on December 14, 1903. After four years of experimenting with gliders and flying machines, the day had come. The flip of a coin with his brother, Orville, would determine who would make the first controlled flight in a heavier-than-air, motorized airplane, known as the Wright Flyer.

An attempt would have been made a day sooner, but the brothers had promised their father, Milton Wright, a Protestant clergyman, that they wouldn’t fly on a Sunday. They had also promised him that they wouldn’t fly together. At 1:00 p.m., the final adjustments were complete, and the brothers stood next to each other as they said a prayer. The coin was flipped, and Wilbur, the older brother, climbed into the cockpit.

The Flyer, which had been moved to the top of Kill Devil Hill, began the take-off roll down the 60-foot launching rail, which was built with four 15-foot two-by-fours laid end-to-end. The airplane rolled down the track on a small, wheeled dolly that the brothers called a “truck.” They called their launching rail “The Grand Junction Railroad.” Orville held the right wing until 35 feet down the track. At 40 feet, the Flyer started to lift. Unfortunately, the aircraft climbed too steeply and stalled when Wilbur pulled back quickly, and the aircraft crashed on its right wing. The flight lasted only 3.5 seconds and measured a minuscule 18 inches long—not even enough to count. Wilbur wasn’t hurt, and over the next several days, the brothers repaired the airplane.

Aviation pioneers Wilbur and Orville Wright didn’t set out with intentions of making history or seeking fame; rather, fame found them. They didn’t start with lofty goals but grounded themselves with interesting projects. If it wasn’t interesting, they didn’t tinker with it. Both brothers credited a small toy given to them by their father when they were young as an influence that piqued their interest in flying. It was a rubber-band-powered little flying apparatus known as a Pénaud’s Helicopter, designed by French aviation pioneer Alphonse Pénaud. The brothers spent time constructing several copies of it in different sizes.

Wilbur, born in 1867, and Orville, born in 1871, were two of Milton and Susan Wright’s seven children. Reuchlin and Lorin were the older brothers, and Katherine was the youngest. Twins Otis and Ida died in early infancy. Their parents encouraged intellectual curiosity and urged them to read anything they wanted from two massive libraries kept in the home. As a bishop in the conservative Church of the United Brethren in Christ, Milton had a large library of religious-themed books. The other library was filled with volumes ranging from literature and poems to scientific and mathematical themes. Their mother, Susan, had attended college, which was not the norm for young women in the 19th century. The boys may have adopted their interest in tinkering with projects from their mother, who acquired an extensive mechanical aptitude as a young girl by spending time with her father in his carriage shop. She learned about tools and how to use them. As a wife and mother, she designed and built simple appliances for herself and toys, including a favorite sled, for the children.

Of the two, Orville was more compulsive and had more of a knack for coming up with inventions than did his studious older brother. Wilbur, or Will as he was known to family and friends, was described as bright and excelled in school. He was outgoing, strong, and a healthy athlete until a hockey injury to his face caused him to withdraw and become depressed at age 18. Prior to the accident, Wilbur had wanted to pursue studies at Yale University. He had almost completed graduation requirements at Richmond (Indiana) High School, but a sudden family move back to Dayton, Ohio, kept him from completing his final courses for graduation. Orville had multiple outside interests, including making woodcuts for a newspaper, building a printing press, and launching a newspaper business. Neither brother received official educational diplomas or degrees.

Wilbur wrote about his brother:

“From the time we were little children, my brother Orville and myself lived together, played together, worked together, and, in fact, thought together. We usually owned all of our toys in common, talked over our thoughts and aspirations so that nearly everything that was done in our lives has been the result of conversations, suggestions, and discussions between us.”

Neither brother ever married and had children of their own, but they enjoyed doting on and playing with nieces and nephews.

Orville recruited his older brother to be editor of his newspaper, “West Side News,” and they opened a printing business, Wright & Wright Job Printers, in their hometown of Dayton in 1889. Soon, however, their interest turned to the bicycle craze that was sweeping the nation. Within three years, the brothers bought bicycles, left day-to-day operation of the print shop to a trusted employee, and opened the Wright Cycle Company. They not only fixed and rented bicycles but also developed their own brands. They were always tinkering with projects, and the bicycle shop became the workshop for their aviation aspirations. Customers entering the shop with bicycles on their minds had no clue that in the back existed a wind tunnel that would eventually change the world.

Taking to the Air

The sand dunes of Kitty Hawk were chosen by the Wrights for experiments with unmanned kites and manned gliders because of the soft landing potential. High winds on the Outer Banks of North Carolina and privacy were other factors that made the location as close to ideal as possible. Flying kites and gliders was a hobby that Wilbur introduced to Orville. Yearly vacations from the Dayton print shop were spent at Kitty Hawk. The older brother was inspired by books in the family library written about the aeronautical work of Sir George Cayley, Alphonse Pénaud, and others. Wilbur wrote letters to the Smithsonian Institution asking about other publications on aeronautical subjects. He also wrote to aerial experimenter Octave Chanute, who in 1894 authored the book “Progress in Flying Machines.” In 1899, the first Wright “kite” became the brothers’ first aeronautical experiment.

Many experiments, failures, adjustments, and trials followed; each time after the North Carolina vacations, the Wrights went back to the bicycle shop in Dayton, Ohio, and worked on solving the technological and mechanical challenges. Orville commented later in life that although the mosquitoes “chewed us clear through our underwear and socks,” the Kitty Hawk vacations and experiments were some of the happiest times of the brothers’ lives.

December 17, 1903, three days after Wilbur’s unsuccessful 18-inch flight of the Wright Flyer, Orville climbed into the cockpit of the repaired aircraft. The weather had turned cold and windy. The nearby government weather station clocked 27-mile-per-hour winds, which prompted the brothers to abandon Kill Devil Hill and devise a level track. At 10:35 a.m., Orville started the engine, and the propellers began to turn. This time, Wilbur ran along beside the aircraft. After a 12-second flight, the brothers began taking turns; by noon, on the fourth and final flight of the day, Wilbur flew 859 feet in 59 seconds. The first controlled flight of a heavier-than-air, motorized plane had been accomplished.

After eating lunch, the brothers walked to a Kitty Hawk weather station and sent a telegram to their family reporting four successful flights and that they would be home for Christmas.