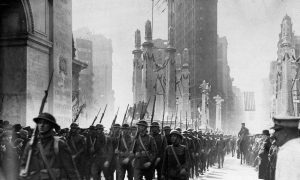 From an early age, I was fascinated by any story about war. Being born in 1969, and being a child in the 1970s, a large number of my “play” options were linked to the war. I read comics such as Warlord and Battle, which were focused on World War II. I made Airfix models, almost all of which were aircraft from the two world wars. I played with Action Man figures for whom there were a range of World War II uniforms.

I watched countless films and programmes about that war and knew the difference between the silhouette of a Heinkel 111 and a Dornier 17. In this, I was no different from most of the other boys at my primary school. This was what was available and what we were fed, though we did not object.

World War I was absent from most of this play, except the model-making, but we were all still left with a fascination for anything military. So to find pictures in albums of family members in uniform was exciting and followed by questions.

The Grayson family roots are in Lurgan, County Armagh, from where both of my father’s parents hailed. Both sides of the family were unionists and had signed the 1912 Covenant against Home Rule in large numbers. In the unionist tradition, service in World War I is a matter of pride.

The three people who lived through the war and whose stories have shaped my study of it are my grandfather, Edward Grayson; his wife, my grandmother, Maud Powell; and her brother, my great-uncle, James Powell.

From my family’s photo albums, I knew great-uncle “Jimmy” had been killed in the army. I knew my grandfather had been in the Royal Flying Corps and the Royal Air Force and had survived to serve in the Home Guard in World War II. I found a postcard which Uncle Jimmy had sent to his sister, Maud, and we had photos of all of them.

Other fragments of the story were that Uncle Jimmy’s family had gone to Australia after he died; that Maud had other brothers who had served “on the Somme”; and that Uncle Bob Grayson had been a padre at the front.

I was told tales of my grandfather flying in the World War II. My father remembered him sitting head in hands, on 3 September 1939, listening to Neville Chamberlain on the radio, and saying: “I can’t believe they are doing it again.” The sense that the “Great War” was supposed to have been the “war to end all wars” was palpable just from this image.

Names of the dead and the Menin Gate. (Amanda Slater, CC BY-SA)

It was not until 1987, when I was 18, that I seriously began to research these stories. The opportunity came from a chance conversation with some school friends about how we might visit France and Belgium after our A Levels, perhaps taking in some war memorials. We did, and I found Uncle Jimmy’s grave just outside Ypres, along with a curious reference to someone of the same name and rank, in the same regiment, on the Menin Gate, which is only for those who had no grave. On my return home I found out from the Commonwealth War Graves Commission that there was only one Sergeant James Powell killed in the Royal Irish Rifles so this remained an open question.

Since then, after a convoluted journey, I have found myself specialising in the history of World War I. That in itself is a tribute to the memory of these three people. Their experiences directly affect what I do on a day-to-day basis.

I have met Uncle Jimmy’s descendants from Australia. His granddaughter had been Googling for some information about her grandfather, and found a piece online which featured me talking about my great-uncle.

She told me that her grandmother, Annie, had left Lurgan in 1926 to go to Australia. Nobody had any idea why, but one possibility became clear just last year. Detailed records of graves and their movements where then closed (although they have recently been made available on the Commonwealth War Graves Commission site).

I enquired of a contact at the CWGC why it was that someone killed in 1915 is buried in a cemetery that was not opened until the end of the war and is also on the Menin Gate. The answer came back that James’s body had not been found until February 1926 when it was identified by the serial number of his boots. It is easy to imagine that until this point Annie had held some hope that he will still alive and only then could begin a new life.

Intriguingly, the photo which James’s granddaughter provided of her grandfather looks like quite a different man to the one in the photo we had always assumed to be Uncle Jimmy. Clearly, the photo from Australia was the right man as it had always been with his widow. But our photo became a mystery.

Who was this man we thought was Uncle Jimmy? Certainly, some members of later generations of the family look uncannily like him. Perhaps he is one of those other relatives who served.

But in any event, this photograph is illustrative of the problems of researching the war. Here I am, an historian coming from a family which talked about the war a lot, but I cannot identify this photo. More surprisingly, despite being a “professional” historian, I have not been able to establish anything concrete about family members who might have served on the Somme (there is no evidence that any did), nor of Uncle Bob who apparently served as a padre.

Some of these things we will never know, their records the victims of the Luftwaffe’s bombing of the Arnside Street repository in London in 1940.

What we can do though, is record as much as we know through the Lives of the First World War project, led by the Imperial War Museums. That way we can piece together the fragments of a fragile history as best we can.

Richard Grayson receives funding from the British Academy. He is a member of the Labour Party. This article was originally published on The Conversation. Read the original article.