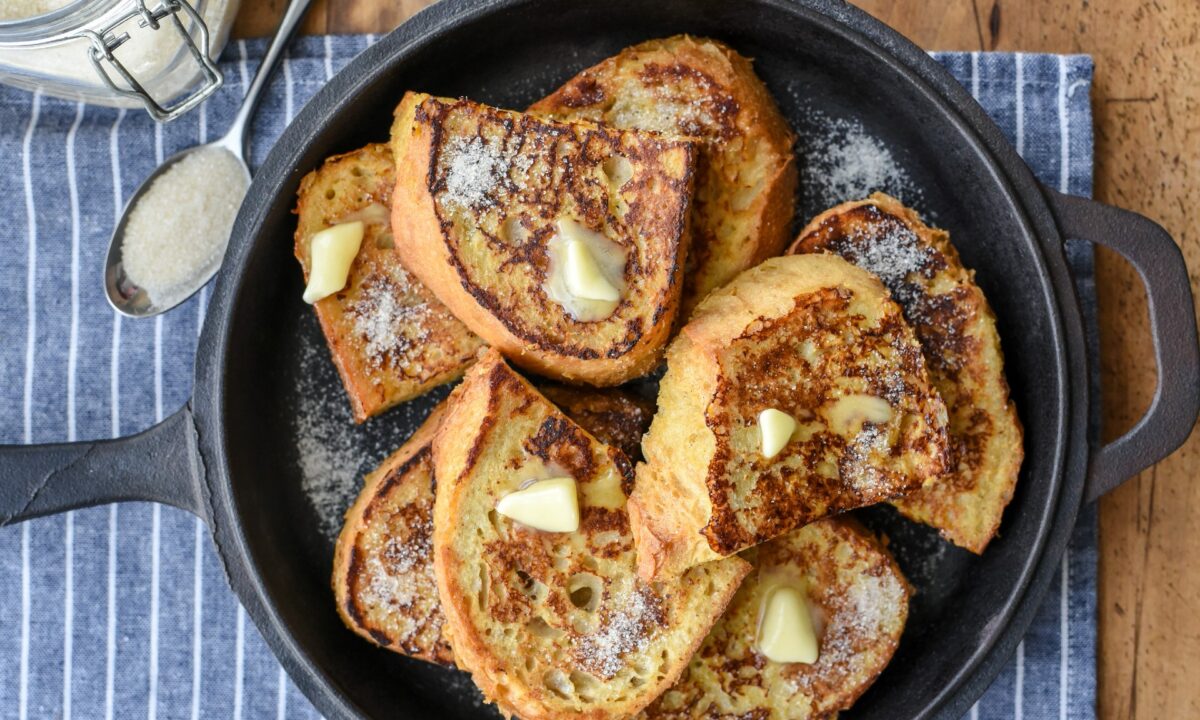 How the French Make French Toast

The French take their bread seriously. Perhaps more than any other food, bread holds the highest status—and greatest symbolism—in France.

For centuries, it was a necessity for eating and feeding the family, being a daily staple food for 90 percent of French families up until the 20th century. In the 18th century, a bread shortage, combined with mass starvation and other grievances, was a catalyst of the French Revolution.

After the chaotic days of the revolution were over, a 1798 law was passed to regulate the bakeries of Paris, including their ingredients, prices, opening hours, and baker’s days off, to guarantee a constant daily supply of bread for Parisians. More than just food, bread truly became a symbol of the right to decent living. Since then, this legislation has been loosened and updated several times, but it still coordinates when bakers can take time off to ensure there are always open bakeries nearby for all Parisians.

The symbolism and social tensions surrounding bread have slightly faded away in today’s France, but it remains perhaps the most treasured food in the country. Bread shall always be affordable, appreciated, shared—and never wasted.

It’s no wonder, then, that the French have mastered the frugal art of transforming day-old bread into French toast, croutons, panades, and more, ensuring that not a single crumb goes to waste.

In France, French toast is known as pain perdu, which translates literally to “lost bread”—reflecting its use of stale bread, so that it isn’t “lost.” Warm, sweet, and tender, the humble treat is a home cook favorite, as it’s easy to make and a great way to use up day-old baguettes or other rustic country loaves.

While it’s typically thought of as a French invention, however, the French weren’t the only ones—or even the first—with this thrifty idea. In fact, some accounts trace the dish back to ancient Rome. During the Middle Ages, poor European families also widely adopted it to make do with bread and other staple ingredients.

Where did the name come from, then? When the recipe was imported from England to America in the 16th century, rumor has it a certain Joseph French replicated the recipe and gave it the name of “French toast.” Another theory, perhaps more plausible, is that American chefs decided to add “French” to the name of this humble dish in order to make it sound fancier and add a few extra dollars to its price.

French or not, French toast and its global cousins are now widely enjoyed. Of note is that pain perdu is a staple mid-afternoon snack or dessert in France—unlike its American counterpart, it isn’t typically enjoyed for breakfast. And while Americans will often reach for a bottle of maple syrup, the French like to enjoy their pain perdu with extra dabs of butter and a sprinkle of sugar.

Not a Crumb Wasted

Pain perdu is but one way the French have come up with to give new life to day-old bread. Here are a few more.

Croutons are cubes of day-old bread that have been flavored with butter, seasoned with minced garlic and sometimes dried herbs, and baked until crunchy. Use them to garnish salads, as in the famous salade Lyonnaise, and to top soups for more substance and a satisfying texture.

Mouillettes are little 1-inch-thick fingers of toasted bread, used to dunk into soft-boiled eggs. This combo, oeufs-mouillettes, is a childhood favorite for most French. It’s often prepared as a comforting Sunday night dinner, to use up the last remains of the weekend’s bread.

A mixture of crumbled bread and milk worked into a paste, a panade is mixed with ground meat to make meatloaf or meatballs, to keep the texture moist and tender.

Whether it’s for coating a cordon-bleu or sprinkling over a Bordeaux-style fish gratin, the French like to keep large chunks of very stale baguettes hidden in a drawer, then pull them out and grate them when needed to make quick breadcrumbs.

Very popular in the French mountains, including the Savoy, Jura, and Auvergne regions, cheese fondues involve holding chunks of bread by long-stemmed forks and dipping into a pot of melted cheese (fromages fondus, in French). They’re usually served in a communal pot and kept warm over candles.

For making pain perdu, I prefer a tight-crumbed bread that will retain the egg mixture nicely—although any type of day-old bread will do. Cut the bread into 1-inch-thick slices, no thicker, or the inside won’t cook properly. Pain perdu is best enjoyed warm, right out of the pan.

In a large mixing bowl, whisk together the milk, vanilla extract, calvados, brown sugar, and eggs.

Dip bread slices in egg mixture, turning to coat both sides evenly. When taking bread slices out of the mixture, let them drip off the excess liquid for a few seconds.

In a large skillet, melt the butter over medium heat. When the butter sizzles, fry each slice of bread until golden brown, about 4 to 5 minutes on each side. Transfer slices onto a plate and repeat until no slices are left.

To serve, sprinkle with sugar and top with small dabs of butter.