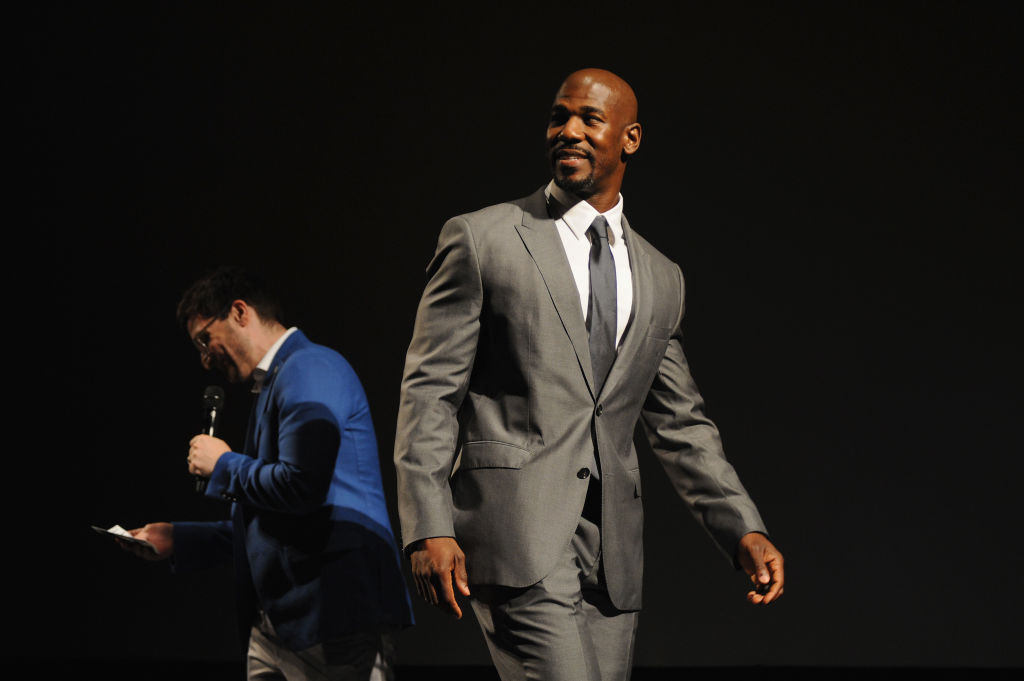 Remi Adeleke attends the U.S. premiere of "Transformers: The Last Knight" at the Civic Opera House in Chicago on June 20, 2017. (Photo by Timothy Hiatt/Getty Images for Paramount Pictures)
People

Remi Adeleke is gifted. He is a writer, actor, mentor, former Navy SEAL, and father of three. When people hear his story, their eyes widen in awe and exclamations soon follow. For years, people have asked Adeleke to write a book.

After telling his story on The Today Show, Kathie Lee Gifford said he had to turn it into a book and movie. He laughed it off. After the segment, she pulled him aside to tell him she was serious—this was a story that could inspire countless people. And then she took him straight to a publisher.

“I think there’s a lot of transformations in the book, and I think ongoing, I think I’ll continue to evolve into the man that is within me,” Adeleke said. “I think I’m always going to be transforming into the person that I’m called to be until the day I die.”

Happy Father’s Day to all the fathers, step-dads, uncles, and mentors who hold it down. Much respect to you all. From the Adeleke family! . #fathersday #weekend #fatherhood #dad #fathers

Silver Spoon to Life of Crime

His father’s life was a tremendous success story; after meeting Christian missionaries in West Africa and impressing them with how quickly he learned, he earned a scholarship to study engineering in London and returned to Nigeria to become the creator of one of the first man-made islands in the world.

Adeleke, whose mother is American, was born with a silver spoon in his mouth. He, his brother, and their parents traveled the world and had a comfortable life. His mother saw the corruption of the Nigerian government and urged his father to move their assets to the United States, but it was important for Adeleke’s father to invest in his home country, where he felt almost a parental responsibility.

The corrupt government indeed seized his father’s assets. When Adeleke was 5 years old, his father died in Nigeria under suspicious circumstances, and they were left with nothing.

They moved to the Bronx, New York. Adeleke’s mother worked hard as a single parent to provide for her two sons, but he remembers her asking for advances even after having stretched every dollar.

Without fully comprehending it at the time, he turned to the streets to fill the void of fatherhood. He saw gangsters and rappers who had, in his mind, “made it,” and sought to emulate their behavior.

It started out with stealing cash from his mother’s purse and escalated to selling drugs and cellphones.

Though he would fluctuate between agnosticism and atheism for several more years, Adeleke says it was the voice of God that prompted him to join the military.

It took a leap of faith on the recruiter’s part, and many tiny miracles that came together, but Adeleke, who didn’t even know how to swim, joined the Navy.

Though he now believes it was God’s plan, he didn’t give it too much thought at that point. The military brought him a better life, and he thought it was his turn to live it up.

“I just really hit a rock bottom point in my life,” Adeleke said.

It was that drop that led him to opening his eyes to God. His brother had turned to faith years ago and his mother is a devout Christian, but Adeleke had rejected religion for most of his life. Deeply depressed and without recourse, he finally cried out to God.

Once he found his faith, nothing was ever the same.

“I didn’t feel hopeless anymore, I felt like I was fulfilled, I felt like I had hope,” he said. “I felt that even if things are going wrong, there’s a plan that I may not understand.”

“To this day,” he said, “things go bad in my life, I fail, I make mistakes, things don’t go the way I intend them to. But every morning I wake up, I just have hope.”

His foray into Hollywood also came out of the blue.

Adeleke’s first exposure to Navy SEALs had been seeing a Michael Bay film; little did he know, years down the line during his military career, he would get a call to play an extra in a “Transformers” film.

It was supposed to be a small appearance, but he kept getting more directions and more lines, and it grew into a bigger part.

As a SEAL turned actor and model, he started telling his story, and it started gaining traction. Eventually, he committed to writing it all into a book so others could benefit from his lessons.

At first, he planned to write the book together with his mother. She wrote the first two chapters and he read them over.

He realized it wouldn’t work—the book needed to be in his voice.

S/O to the @118thwing ! Thank you so much for letting me share a bit of my life with my brothers and sisters in arms. Once again, I apologize about the lack of books in the Nashville area. Hopefully the publisher can work that out soon🙏🏿 . . #transformed #book #signing #veteran #veterans #airforce #base #nashville

He got halfway through the book when his publisher got worried it was going to turn into a big 200,000-word ordeal. They had him hire a ghostwriter for the second half, and the results, Adeleke said, had him “turn red.”

He started rewriting the chapters he was sent. When the writer read them, he agreed Adeleke was the only one who could tell this story.

“I had five weeks to turn in the book,” Adeleke said. “I worked until 2 in the morning, woke up at 6 in the morning, and got back at it, and was able to turn it in a week before my due date.”

The process just flowed, he said, and he would think of stories and events he’d forgotten as he was writing. He also did extensive interviews, including with people with whom he had sold drugs and cellphones, because it wasn’t just personal for him, and he wanted to represent everything correctly. As a member of the military, the book needed to be vetted as well, so as to not disclose confidential information.

The book isn’t the only thing he’s written: Adeleke has an espionage thriller screenplay coming out to market soon, and is now finishing up a black historical military screenplay.

Despite his tremendous arc, he says a main theme of his story is failure.

“I want people to realize that, you know, none of us are immune to failure,” he said. The important part is to not be defined by failure, but use it as a lesson.

There is another takeaway of compassion he hopes people can glean from the book.

“There were so many times that I did not deserve a second chance at all. But people came along, along the way, and gave me a second chance,” Adeleke said. “And along with that, the importance of giving yourself second chances—nobody’s harder on me than me … sometimes you just have to be willing to give yourself a second chance, a third chance, or a fifth chance, and never give up on yourself.”

Everything he does now, Adeleke said, is to give his sons what he never had, and more.

“That’s why I work as hard as I work,” he said. “I know that they have the potential to be very, very great men.”

Parenting has been an interesting journey for Adeleke. He and his wife, Jessica, come from very different backgrounds and families, and have to negotiate how they will raise their kids, which he realizes is a common thing for parents.

He wants to be able to instill in them values like integrity, keeping your word, and leading by example. His eldest just started kindergarten, and they turn frustration into a lesson on perseverance.

His children are the greatest joy in his life. Adeleke said he realized even before he became a father how crucial it was for him. He’s been volunteering as a mentor for more than a decade now, which came out of his own volition without any organization asking him to. He knew he wanted to be able to give back somehow, and one day found himself going to an inner-city church to volunteer his time for the local youth.

“People ask me all the time, who’s the most famous person you’ve ever met or would like to meet, and I always go back to my kids,” he said. “Sometimes when I’m looking at them, I am in awe. I can’t believe that I’m blessed to have three boys and just have them and have them love me and just be with me.”

From growing up as a a boy without a father, to being a father of 3 boys. That storyline alone has reinforced in me the fact that redemption is absolutely possible for all!!! Never forget that, and never give up. Life may be beating you down now, but brighter days will come. And if you don’t believe ask my mom, @paulineadeleke who struggled for years to raise two Bronx boys by herself, and now rejoices everyday. . . #hope #redemption #neverforget #nevergiveup #dontquit #motivation #motivationalquotes #grind #betterdays #dontgiveup #motivational #family #legacy #future #hopeless #bronx