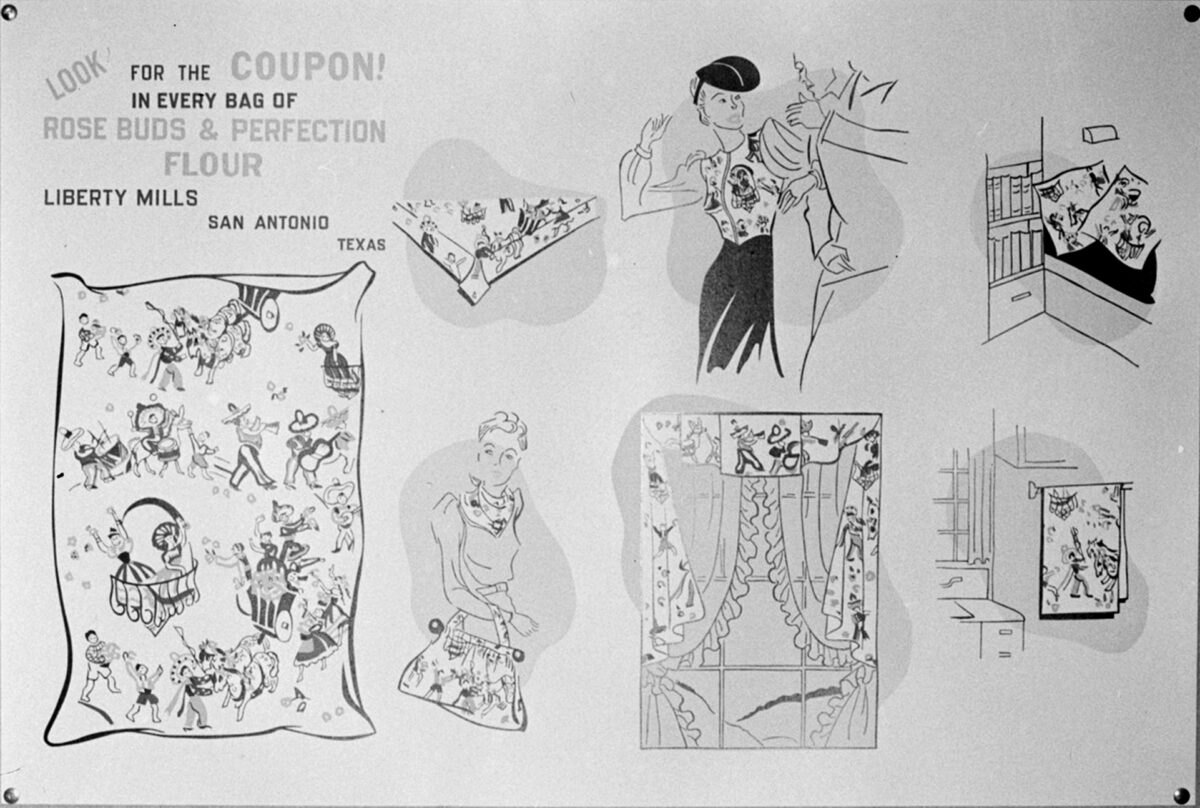 A chart indicating the various uses of feedsacks. Throughout the rural areas and in migrant camps, garments made of this sacking were common. (Library of Congress)
American Essence

How feedsacks became the fabric of life during the Great Depression of the 1930s
BY Nancy Whiting TIMEApril 12, 2022 PRINT

Chicken linen was the result of changing technology merging with historical trends. The homely practice of using what you had on hand still sparks memories. For example, knowing the skill and work that went into old quilts, many pieced with chicken linen, I cannot resist them.

When I was a girl in Kirksville, Missouri, my father and I refinished a bed my grandmother found in a chicken coop and bought for $2. I slept in it under a Grandmother’s Flower Garden quilt that my grandmother made from what she had on hand, including feedsacks.

Over the years, I’ve collected several handmade quilts that have a common construction period, hand-piecing, and quilting, and they all contain patches from feedsacks.

From Canvas Bags to Feedsacks

During the early 1800s, most goods were shipped in wooden barrels or crates. Local mills also sold goods in labeled, reusable 50- and 100-pound canvas bags. Households kept these bags and brought them to the mill to be refilled. Farmers often brought their grain for milling by the wagon-load and carried the ground product home in those bags.

Two things made canvas bags obsolete: the development of a functional sewing machine and inexpensive fabric—lightweight, tightly woven cloth—in large quantities. Combined, these made feedsack production possible and practical. As a result, feedsacks replaced canvas bags as the popular packaging material of the day, and thrifty individuals put this source of fabric to good use.

Sewing machine invention was an “Aha!” moment. For 150 years, people tried to invent a functional sewing machine that imitated “needle-pulling-thread” hand-sewing. While inventions that purported to sew had been made as prototypes, they were not further developed.

In 1846, however, Elias Howe patented and produced a functional chain stitch sewing machine, a predecessor to the common lockstitch sewing machines used today. (Chain stitching loops a continuous thread back on itself, while lockstitching hooks two threads together to form a seam.) Howe became wealthy—not from the machine, because his didn’t perform reliably, but from lawsuits over patent infringement. Howe’s lawsuits became the first U.S. patent war.

In 1851, Isaac Merritt Singer designed, created, and patented the first practical, functional sewing machine with co-founder Edward Clark, a shrewd businessman whose marketing innovations included America’s first installment payment plan. Although Singer himself was pushed out of the business, his name lives on with the Singer company.

Feedsack assembly by a chain stitch machine using lightweight string rather than thread makes opening feedsacks simple. A steady tug on the correct string makes the whole seam unstitch like magic. That “magic thread” is why clothing isn’t usually made on chain stitch machines. Chain stitch construction made turning a feedsack into fabric simple.

Fabric for Other Uses

Cotton sacks printed with company logos brought branding, product identification, and marketing to consumers in one fell swoop. But many people saw something else in those sacks: a source of fabric.

Manufacturers soon noticed this recycling. In October 1924, the first patent, filed by Asa T. Bales, was granted for a product packaging bag made from printed fabric with a label that was designed to wash out easily, so that the fabric could be more and universally reused. Feedsacks made of colored instead of unbleached cotton or linen were produced initially, followed by gingham checks. When simple prints were produced, they quickly became popular.

Feedsack popularity really took off during the Great Depression. While many attribute the adage, “Use it up, wear it out, make it do, or do without,” to Calvin Coolidge, whoever said it first doesn’t matter. Those concepts were in place long before that adage was created. Waste not, want not, make and mend was a way of life.

Manufacturers took full advantage of the marketing possibilities: with one simple, reasonably-priced change in packaging, the companies appeared altruistic and public-spirited. They built brand recognition and brand loyalty while increasing sales. No matter how severely curtailed the household income, folks still must be fed and clothed. Even with what appear to modern eyes to be low prices for fabric by the yard, not having to actually lay down cash for dress goods was a valuable bonus—a true free gift.

As the Great Depression ground on, available feedsack fabric designs could be suitably sewn into clothing for anyone. The fabric was used for a multitude of purposes: dishtowels, diapers, quilt pieces, dresses, blouses, shirts, skirts, shifts, nightclothes, aprons, pillowcases, wash curtains, or any clothing or household item that would reasonably be made from lightweight fabric. With the stern Depression economy practiced by people in financial straits, multiple uses for the same fabric prevailed. Cut a garment from the feedsack fabric, but save the scraps for a secondary purpose—quilt pieces, dishcloths, rags, and patches. A child’s dress would be handed down to the next child. As the garment wore out, shirt collars and cuffs were turned, a dress cut down to a skirt, and pieces from a worn-out garment would still be firm enough to make for more quilt pieces.

Companies became delightfully creative with the value that packaging could add to the purchased product. Feedsacks printed with the pieces needed to make dolls, stuffed animals, and toys meant a birthday or Christmas gift could be made at the expense of only some time. Not only did the individual prints become more extensive, feedsacks with border prints, quilt squares, appliqué patterns, or embroidery patterns appeared. Having a series or collection meant that specific feedsacks—and the products in them—would be in demand.

A 100-pound feedsack, measuring 36 by 42 inches, yielded roughly a yard and a half of fabric—enough to make a child’s garment. A dress for an adult woman required three or four feedsacks. The desire for several similar feedsacks led to high levels of creativity for the women involved. Possibly the most straightforward method was to find and purchase more of the product, but that wasn’t always practical. How many 100-pound bags of flour does a family need at one time? Certainly, incidents occurred where someone from the household went with Father to the feed store and insisted on a specific feedsack. Women arranged “trade parties” to swap feedsacks, ideas, and possible sources—bakeries, for example, purchased flour and sugar in large quantities, and some sold the empty sacks or otherwise passed them along.

Companies seized the opportunity for cross-marketing: Popular pattern companies designed and produced patterns specific to feedsack yardages. Department stores carried some of the same fabrics feedsacks were printed on. The Percy Kent Bag Company was licensed to print feedsacks with Disney character motifs, including Alice in Wonderland.

Just as the feedsack trend began with new technology, new technology ended the trend. In the late 1940s, cloth feedsacks cost 32 cents to produce, while the double-layer paper bags that flour and sugar are still sold in today cost a dime then.

By 1948, roughly half the fabric feedsack market was lost to paper bag technology, and it faded out through the 1950s. In the early 1960s, manufacturers tried a revival campaign, but even with popular culture prints, the attempt failed.

The feedsack story isn’t over. Reproductions of feedsack yard goods are widely available and used by crafters. This can make it difficult to determine whether a feedsack item is genuine or a reproduction.

Collectors abound for original feedsacks: for the clothing, toys, and goods made from them; for contemporary photographs related to feedsacks; and for the advertising and marketing materials used to promote them, as evidenced by lively eBay and Etsy house markets in feedsack nostalgia. One oddity: Goods made from labeled white feedsacks are popular now, too—and setting the dye to preserve the label has overtaken removing the label.