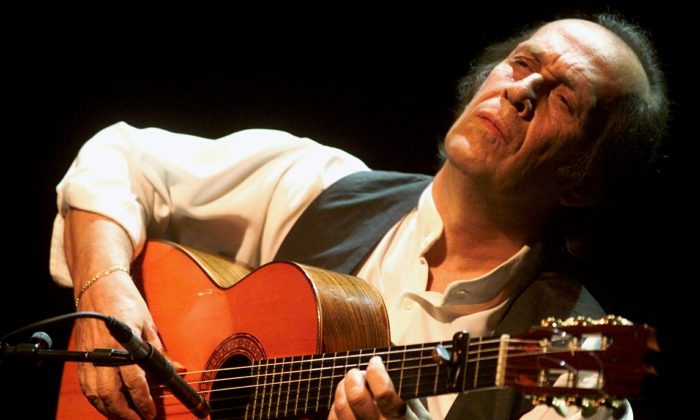 As I think of the recently deceased guitarist Paco de Lucía, there is one thought that immediately comes to mind: he has arguably brought about the most thorough transformation of flamenco in the second half of the 20th century. He brought into effect an enormous range of stylistic innovations and was involved in a huge number and variety of artistic collaborations. This makes it very difficult to give his oeuvre a precise location in the complex constellation of styles that forms the universe of flamenco today.

But if one had to describe his contribution to this music in only a few words, it would be fair to say that he pushed its boundaries in unprecedented and innumerable directions. He mixed flamenco with jazz and other popular music styles and opened it up to the colourful charm of the electric bass, saxophone and flute, among other instruments.

By incorporating the Peruvian cajón, which is now a standard in most flamenco ensembles, he arguably payed tribute to the tradition of cantes de ida y vuelta (round trip songs) that emerged through commerce between Latin America and Spain during the 19th century. This is only one example of many such developments. Paco de Lucía fully brought into effect a hybrid conception of flamenco that undermines any attempt to establish a stylistic canon. And so, he also brought the politics of exclusion on which those canons rely under question.

Like most – if not all – innovators, Paco de Lucía is not without illustrious precedents. One could count cantaores (singers) Antonio Chacón and Silverio Franconetti among those who have similarly explored and pushed past the generic limits of flamenco and charted territories unknown in their time. Paco de Lucía’s hybrid innovations not only have deep aesthetic value: they undeniably also hold profound ideological implications when seen in hindsight.

Probably more than any of his contemporaries – although some of his collaborators, above all famous cantaor Camarón de la Isla, should equally deserve credit – he managed to reverse a process started in the 1920s, when poet Federico García Lorca and composer Manuel de Falla tried to establish an aesthetic canon of flamenco. Lorca and Falla sought to elevate flamenco to the status of “high art”. They tried to do so by grounding it in the cante jondo tradition – that is, its purest and most sober expression. In doing so, they separated it from the commercial and touristic forms which thrived in public venues such as cafés and tablaos.

Their highly influential attempt to inscribe cante jondo as the purported “essence” of Andalusia and Spain was a response to their fears that Spain’s fast-paced but uneven modernisation in the early twentieth century could bring about the demise of tradition. But their successors appropriated their agenda to less innocuous and more coercive ends.

Building on Lorca’s and Falla’s anti-modern and essentialistic notion of flamenco, the Franco dictatorship turned this music into an iconic representation of the purported “difference” of Spain. The Franco regime exploited this with the aim of attracting tourism. And it used a nationalised image of flamenco to subdue expressions of regional identity – mostly Catalan and Basque – that challenged the illusion that Spain’s identity was homogeneous.

Let it be clear: Paco de Lucía’s contributions to flamenco could not be understood without the precedent of Falla and Lorca. But we should welcome his work as a reversal of – or an antidote against – subsequent misuses and appropriations of their intellectual endeavours. Of course, it hardly needs to be said that one need not be acquainted with all these questions to enjoy his rich and vast legacy.

Those of us who have been lucky enough to witness one of his live performances will probably be able to add a further dimension to that enjoyment. I remember his performance at the Vitoria Jazz Festival in my late teens as one of the most memorable and overwhelming aesthetic experiences in my whole life. His disappearance is therefore sad and his presence irreplaceable. But he does not leave a void behind him: his transformation of flamenco, reinstation even, leaves enormous promise of future development and innovation in the genre.

Samuel Llano’s research on flamenco is part of the project “Wrongdoing in Spain, 1800-1936: Realities, Representations and Reactions,” funded by the Arts and Humanities Research Council.