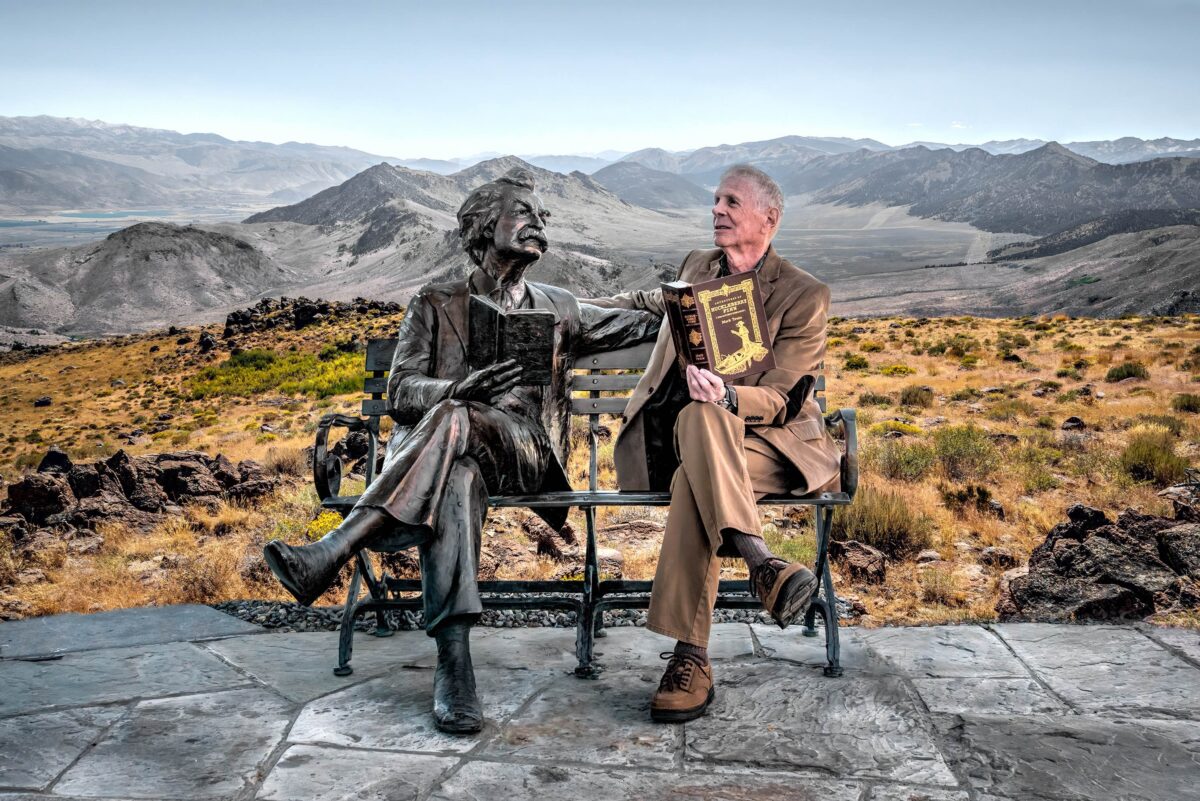 Revered for his wisdom and humor, Twain is one of America’s most beloved writers. (Courtesy of Mark Twain Papers & Project. Restored by Maria Coulson)
American Essence

Twentieth-century American author William Faulkner called him “the father of American literature.” But few of his compatriots today know of his raucous literary upbringing in a silver-mining boomtown. Unaccomplished and undecided as to his future, he first took up writing as a career in Nevada, and there he adopted a pen name and attracted a readership.

Today, Mark Twain is esteemed as one of our nation’s most revered writers and humorists.

Samuel Langhorne Clemens set foot in Virginia City to work at the newspaper Territorial Enterprise in September 1862, 15 months after he rode west on the Overland stage with his older brother Orion, the newly appointed secretary of the Nevada Territory. The 26-year-old adventurer spent most of that time prospecting for gold and silver, enduring hard manual labor and wretched quarters, and “living on alkali water and whang leather.”

He showed up at the newspaper wearing a scruffy slouch hat, a faded blue flannel shirt, and threadbare trousers that hung on his boot tops. “A tangle of reddish-brown hair fell to his shoulders and a mass of tawny beard dropped half way to his waist,” according to his first biographer.

In this extremity, Clemens turned to journalism. As it happened, the Enterprise had published breezy burlesques he had submitted with the pseudonym “Josh”—presumably intended as more verb than noun—that convinced co-owner and editor Joseph Goodman to offer him a job. “Twenty-five dollars a week,” Mark Twain would write, “it looked like bloated luxury—a fortune—a sinful and lavish waste of money.”

It was on the cusp of flush times when devilish spending and feverish mining activity shaped the Comstock Lode culture. Swelling to a population of more than 15,000 in the rush of 1863, Virginia City was poised to become a sagebrush metropolis. Even so, the Missouri son was under no illusions: “We may want poetry,” but the landscape “looks something like a singed cat.”

The Territorial Enterprise had just moved into its new, three-story brick building on bustling C Street crowded with quartz wagons and freight teams. The oldest and most prominent newspaper in the territory, it was a thriving daily, employing a fistful of columnists and a covey of reporters whom Goodman handled with a loose rein, nurturing their creative talents and high spirits. The brash and slapdash Sam Clemens thrived under the casual regime.

His stint on the newspaper introduced him to journalists who would have great influence on his development as a writer. They were men who believed in robust, spirited journalism, who believed in giving full play to rough humor. Clemens’s sledgehammer comic style evoked guffaws from the rambunctious miners that echoed off the mountains and coursed down the canyons of the mother lode. He grabbed their attention by either amusing or irritating them with writing as erratic as his moods, sometimes approaching brilliance, sometimes descending into banality.

Straight news was too mundane for the novice reporter. “Stirring news was what a paper needed,” and he considered himself “peculiarly endowed with the ability to furnish it.” He recognized such stories were easily concocted: Exaggeration could propel the most trivial event onto the front page. His first day on the job, he recalled a decade later in his rollicking memoir “Roughing It”:

I found one wretched old hay-wagon dragging in from the country. But I made affluent use of it. I multiplied it by sixteen, brought it into town from sixteen different directions, made sixteen separate items of it, and got up such another sweat about hay as Virginia City had never seen in this world.

Presently, when things began to look dismal again, a desperado killed a man in a saloon and joy returned once more. I wrote up the murder with a hungry attention to details.

Around the newspaper, Clemens was known for a foul-smelling pipe that his colleagues dubbed “The Remains” and for a “sulphurous temper” that led them to call him “The Incorrigible.” Although he could be exasperating, the reporter and later city editor was liked and admired by his colleagues. “Back in the old days Sam was the best company,” Goodman said, “the drollest entertainer and the most interesting fellow imaginable. His humor always cropped out.”

After about a month on the Territorial Enterprise, Clemens created the “Petrified Man” hoax to ridicule the flurry of dubious newspaper accounts of fossilized remains that had fired the public’s imagination. “The mania was becoming a little ridiculous. I felt called upon to destroy this growing evil. I chose to kill the petrification mania with a delicate, a very delicate satire.”

With solemn absurdity, he recounted the discovery of a “stony mummy” in nearby Gravelly Ford, exemplified by his ingenious depiction of its pose. “The body was in a sitting posture, and leaning against a huge mass of croppings; the attitude was pensive, the right thumb resting against the side of the nose, the left thumb partially supported the chin, the fore-finger pressing the inner corner of the right eye and drawing it back partly open.” An inquest conducted by Justice Sewell of Humboldt City concluded the “deceased came to his death from protracted exposure.”

This and his subsequent humbugs were intended to be humorous. Success demanded they carry immediate conviction but only temporary deception. The trick was to achieve superficial plausibility; Clemens did that in “The Petrified Man,” employing his most sober reportorial style.

The story was quickly picked up by other newspapers and spread east. It bred hostility from editors who could not forgive themselves for their slow-witted failure to read the satirical tale intelligently. Through the hoax, Clemens ridiculed the local politician Sewall and mocked a gullible public and press with a taunting hunk of stone winking and thumbing its nose at them.

“To find a petrified man, or break a stranger’s leg, or cave an imaginary mine, or discover some dead Indians in a Gold Hill tunnel, or massacre a family at Dutch Nick’s, were feats and calamities that we never hesitated about devising when the public needed matters of thrilling interest for breakfast,” Mark Twain wrote in 1868. “The seemingly tranquil ENTERPRISE office was a ghastly factory of slaughter, mutilation and general destruction in those days.”

Clemens gained a reputation in the Western press as half-cocked, ludicrous, smart-alecky, and maniacal. Some serious-minded editors dismissed him as a frivolous fool. Others gasped at his audacity but were eager to invigorate their columns with his provocative and uproarious words lifted from the Enterprise. Regrettably, most of the stories that gained him notoriety were lost in the Great Fire of 1875 that ignited Virginia City.

A decade after the nom de plume “Mark Twain” first appeared in the Territorial Enterprise on February 3, 1863, the author claimed he’d appropriated it from a Mississippi riverboat captain. More convincing, Comstock Lode legend holds he acquired the pen name before it ever appeared in print, derived from his habit of striding into the Old Corner saloon and calling out “Mark Twain!” in his Southern drawl to the bartender. It was a term from his Mississippi steamboat pilot days signifying two fathoms—safe water. But in Virginia City, it meant set up two whiskeys for Sam Clemens and put down two marks against his account.

On major assignment late that fall, Mark Twain went to Carson City to cover the first Nevada Constitutional Convention ahead of anticipated statehood. Undoubtedly, it was satisfying for the former prospector to return to the capital, where a year earlier he had been regarded as “no more than an amusing indolent fellow.” The shabby clothes and scraggly beard of his mining days were gone. Now stylishly mustachioed and coiffured, he dressed for journalism in a frock coat and matching vest, starched shirt, and silk bow tie.

The dapper reporter could be affable and garrulous but was too reticent to be a grinning glad-hander. Straight-faced in his photographs, he avowed, “There is nothing more damning to go down to posterity than a silly, foolish smile caught and fixed forever.” A literary critic and close friend of young Mark Twain affirmed he did not relinquish himself easily. “He glimmered at you from the narrow slits of fine blue-greenish eyes, and he was apt to smile in your face with a subtle but amiable perception, and yet with a sort of remote absence: you were all there for him, but he was not all there for you.”

By 1864, Mark Twain began to show signs of the doldrums, of craving a change of scene, of needing a new challenge. He was 29 when he left Virginia City in late May and immature for his age. Flat-out arrogant, he reprimanded the Enterprise owners in their own columns and gave public instruction in journalism to the editor of the Carson City Independent.

He had learned all he was likely to on the Comstock. Enterprise comrade and mentor Dan De Quille perhaps best took his professional measure: “Mark Twain, as a reporter, was earnest and enthusiastic in such work as suited him—really industrious—but when it came to ‘cast-iron’ items, he gave them ‘a lick and a promise.’”

The Territorial Enterprise granted him a free hand to cultivate imaginative writing. This freedom was in some respects harmful. At times, he wrote with too little restraint, which could result in coarseness or overzealousness.

The 21 months Mark Twain spent in Nevada journalism were an important catalyst to his growing confidence for self-expression and clearly contributed to his development as a writer. His stories, hoaxes, and parodies grew into a thoroughly American literary genre. Through his keen wit, vivid imagery, and carefree writing style fully realized in “The Adventures of Huckleberry Finn,” he fashioned a satirical and hilarious life on the Western mining frontier.