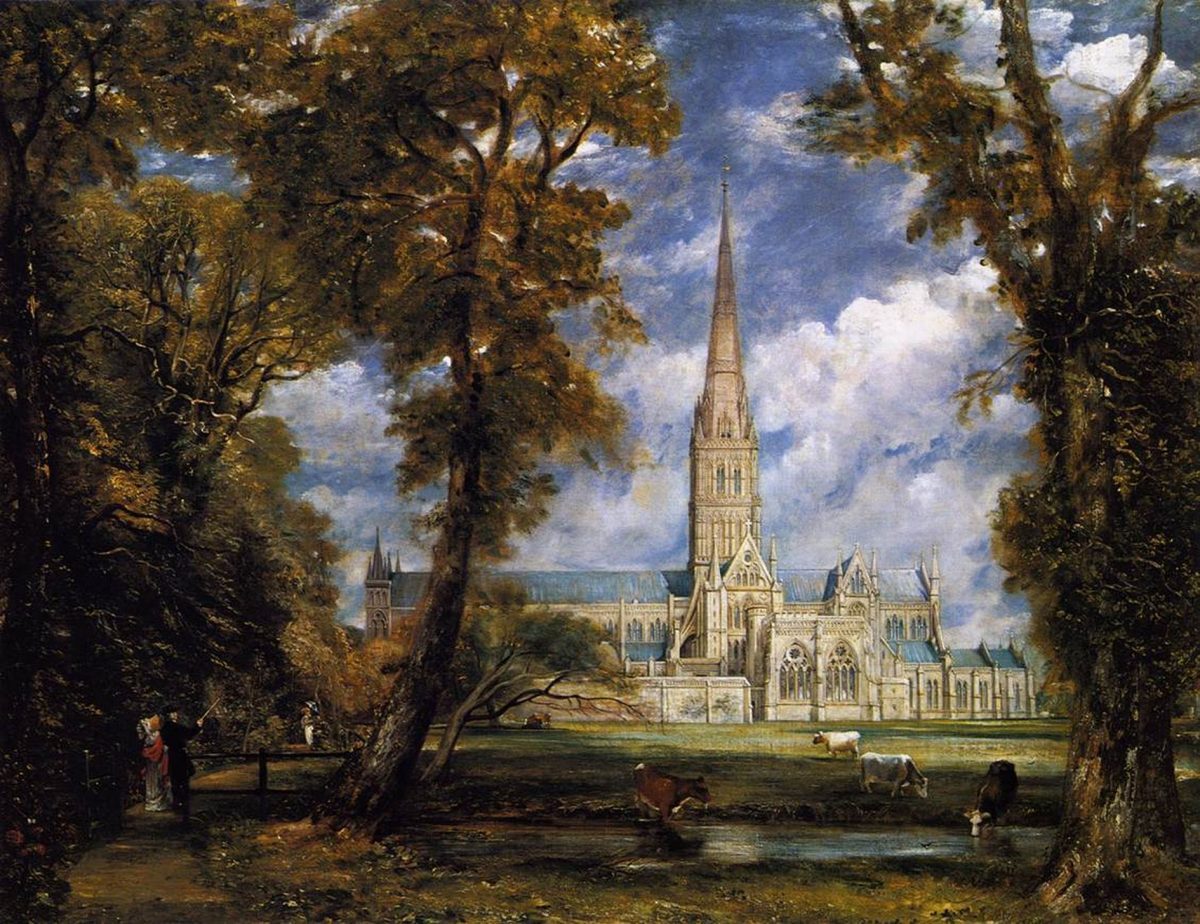 If you want foreboding old buildings that dark lords and werewolves are bound to frequent, look no further than Britain’s enviable Gothic architecture. From Strawberry Hill in London with its twisting corridors and glaring pinnacles, to ruined abbeys, and cathedrals such as St. Andrews and Jedburgh, darkness seems to thrive in these places—the perfect location for a Halloween party if you’re lucky enough to be invited.

What is often not appreciated is that this style had two distinct periods of glory, with a long time out of favor in between. And it’s not just their tall spires and endless corridors and gargoyles that brought these structures supernatural associations. The dark reputation they gained in their wilderness years helped, too.

Gothic was in its pomp in medieval and Tudor Britain. Famous examples include Salisbury Cathedral in southern England, Caernarfon Castle in Wales, and Melrose Castle and Brodie Castle in Scotland. The style was used by church, state, and universities, Oxford and Cambridge especially. It was certainly not associated with terror in this period—more with the potential perils of sin and purgatory, or the rigors of academia.

Gothic waned in the 17th century, replaced by the round-arched and rationalized style of classicism. Imported from the continent and inspired by ancient Greece and Rome, the new style came to prominence in London public and private works such as the Banqueting House at Whitehall, and the Queen’s House in Greenwich.

Classicism continued to spread in the 18th century, while Gothic came to be seen as barbaric. It was intentionally connected with the Goths by critics who favored Greek and Roman architecture. These included the Renaissance artists Raphael and Vasari, Georgian intellectuals such as John Evelyn, and architects like Isaac Ware. (Ware would later introduce certain Gothic elements into his work.) These people often argued that when the Goths sacked Rome in the fifth century, they destroyed “proper” classical architecture and introduced a backward, coarse style—Gothic—in its place.

In the first half of the 18th century in particular, almost all the major architects promoted classicism. As the Scottish minister and writer Alexander Gerard put it in 1759:

The profusion of ornament, bestowed on the parts, in Gothic structures, may please one who has not acquired enlargement of mind … where refinement is wanting, taste must be coarse and vulgar.

Worse still in those days, Gothic was associated with the Catholics. Catholicism in the 1700s was viewed with suspicion and concern, thanks partly to the Jacobite risings. Both were considered a threat to the Hanoverian and classical order, never mind that the great medieval abbeys spared destruction in the Reformation had been put into the service of the Protestant church.

Gothic was not cast aside entirely, however. One leading enthusiast was writer and historian Horace Walpole, the youngest son of Sir Robert, Britain’s first prime minister. In 1748, he redeveloped Strawberry Hill, a collection of 17th-century tenement houses in London, which are now known as the most important mid-Georgian example of Gothic Revival.

Walpole’s choices were rooted in a love of medieval architecture and genealogy. He presented his project as realizing the castle of his ancestors, painting their coats of arms on the walls of the house’s armory, for example.

Gothic’s grim associations meanwhile found an outlet in its other notable form in Georgian Britain, the Gothic novel. Horace Walpole was again a pioneer. “The Castle of Otranto” (1764) tells of incest, brutality, and deceit and is set within what we can only interpret as a Gothic structure. Subsequent authors from Ann Radcliffe to Bram Stoker also located terrifying scenes and ghastly encounters in and around such buildings.

The form became so popular that an anonymous letter published in The Spirit of the Public Journals for 1797 proposed a satirical “formula” for writing a Gothic novel. It highlights the centrality of Gothic structures to the genre:

Take — An old castle, half of it ruinous.
A long gallery, with a great many doors, some secret ones.
Three murdered bodies, quite fresh.
As many skeletons, in chests and presses.
An old woman hanging by the neck; with her throat cut.
Assassins and desperadoes quant suff.
Noise, whispers, and groans, threescore at least.

Then in the 19th century, Gothic made a stylistic comeback. This was helped by antiquaries in the mid-Georgian period who had studied Gothic works and treated them as part of Britain’s architectural heritage.

By the time the Palace of Westminster was almost completely destroyed by fire in 1834, fashions had come full circle. For a competition to commission a new building, the brief said it had to be “either Gothic or Elizabethan.” It had to preserve “those venerable and beautiful remains of [Gothic] antiquity, the cloisters and the Crypt of St. Stephen’s Chapel.”

Gothic is eminently English in every respect … It is the architecture of our history and our romance. Our kings of old held court in Gothic structures.

Dissenting voices such as the scientist and thinker W.R. Hamilton believed this revival “may possibly throw us back to the Middle Ages,” but for the next few decades they were ignored. Gothic revivalism went hand in hand with top-hatted Victorians and their fixations with death and religion. We can still see the results in the likes of monuments to Prince Albert in London, and Sir Walter Scott in Edinburgh, Scotland.

When Gothic fell out of favor a second time in the late 19th to early 20th centuries, it was because of the availability of new materials such as glass and steel—and new priorities, such as functionality. Suggestions of Gothic barbarism and un-Britishness were left in the past. Ominous turrets and groaning archways may sometimes seem best suited to the sets of Dracula movies, but these glorious structures will always have a treasured place in British heritage.

Peter Lindfield is a Leverhulme Early Career Research Fellow at Manchester Metropolitan University in Manchester, England. This article was originally published on The Conversation.